Syrian government retaliates for killing of soldiers by Islamic State

The Syrian government and Russia accused the Islamic State of blowing up a troop bus of the Syrian army’s Fourth Division in its main headquarters near Damascus. 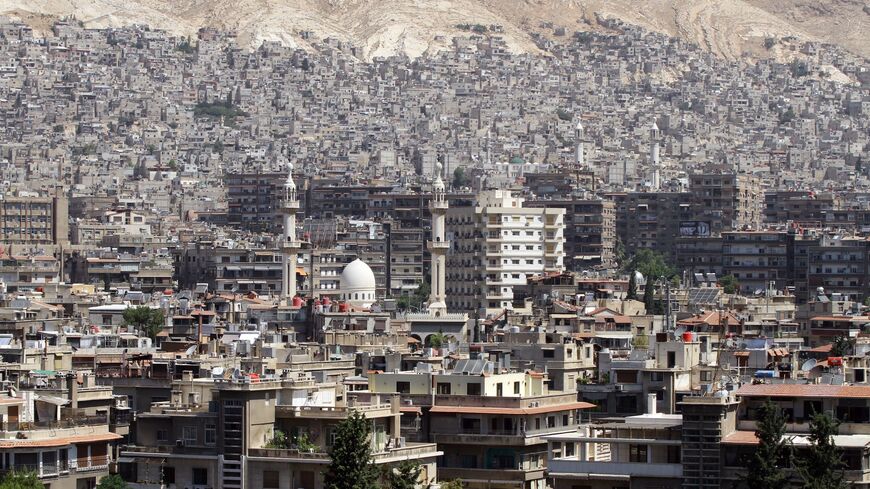 A general shot taken on June 30, 2015, shows a neighborhood in the Syrian capital, Damascus. - LOUAI BESHARA/AFP via Getty Images

ALEPPO, Syria — At least 18 Syrian soldiers were killed in an IED explosion targeting a military bus in the suburb of al-Saboura in the countryside of the Syrian capital, Damascus, on Oct. 13. The state-run Syrian news agency, SANA, quoted an unnamed military source as saying that a bus carrying military troops was hit on the morning of Oct. 13 in a “terrorist attack” that left 18 soldiers dead and 27 others wounded.

On the same day, Imad Nuseirat, a journalist for the Syrian government’s Tishreen newspaper, published a picture of the explosion site in al-Saboura suburb.

No party has claimed responsibility for the attack as of yet.

A military source close to the Syrian government forces who is based in Damascus’ countryside told Al-Monitor on condition of anonymity, “The targeted bus belongs to the Fourth Armored Division led by Maher al-Assad, the brother of President Bashar al-Assad.”

The source added, “Al-Saboura suburb has served as the stronghold of the Fourth Armored Division for many years. The area has not witnessed any military operations since 2011.”

“It is a secured zone with the exception of some sporadic explosions targeting the Fourth Armored Division on the roads inside the area,” the source said.

The attack coincided with the escalating attacks by the Islamic State (IS) since the beginning of 2022 in the countryside of Damascus, namely in al-Kiswah area.

In May, IS announced that it was responsible for the bombings that struck al-Dirkhbyeh area in al-Kiswah countryside, south of Damascus, which left several people dead and others wounded.

The Syrian government and Russia are pointing the finger at IS for the attack on the Fourth Armored Division’s military bus.

On Oct. 17, Russia’s state news agency TASS quoted Russian Maj. Gen. Oleg Yegorov as saying during a press conference that Russian and Syrian forces killed 20 militants in a security operation in southern Syria targeting those accused of carrying out the bombing of the military bus.

Abu Muhammad al-Hourani, a spokesman for the Horan Free League (a local network that transmits news in southern Syria) who is based in Daraa province in southern Syria, told Al-Monitor, “IS has not yet claimed responsibility for the bombing of the Fourth Armored Division bus.”

"The operations against IS cells in the city of Jasim in the Daraa countryside are ongoing and have left a large number of dead among the organization’s ranks,” the spokesman said.

“No Russian or Syrian regime forces participated in the operations against IS, contrary to Russia’s and the regime's allegations. The security operations against IS cells were launched by former fighters in the Free Syrian Army (FSA) from Jasim, in addition to groups from the Russian-backed Eighth Brigade,” Hourani added.

A military official in the Eighth Brigade in Daraa — which includes former fighters of the FSA who had agreed to the reconciliation deals reached with the Syrian government in southern Syria — told Al-Monitor on condition of anonymity that the decision to send military reinforcements to Jasim is not linked to an order from the Syrian government or the Russian forces leadership in Syria.

“We responded to a call by the notables in the city of Jasim to participate in the fight against IS,” the official said.