The newest twist in Syria involves a Russian-backed military group working to carve out an autonomous zone for itself in the southwest and even clashing with regime forces, perhaps paradoxically seeking to boost regime's legitimacy. 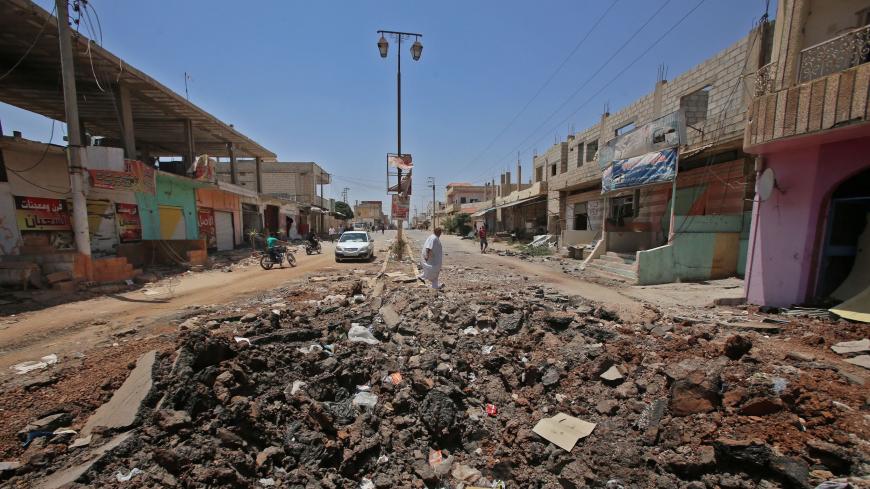 A Syrian civilian walks past a shell hole after Syrian government forces recently recaptured the village of Ghariyah ash Sharqiyah from the rebels, in the province of Daraa, on July 4, 2018. - YOUSSEF KARWASHAN/AFP via Getty Images

The longer the Syrian war continues, the more paradoxes have sprung up out of it. The latest involves the Moscow-backed military group striving to carve out an autonomous zone for itself in southwestern Syria and even clashing with the regime forces.

By offering its backing to the formation, the Russians, once the guarantors that those southwest territories would remain solidly under President Bashar al-Assad’s control, are now trying to kill two birds with one stone. They seek to both contain the Iranian influence near the Israeli border and quash any signs of dissent that emerged following the "reconciliation." For all practical purposes, it is highly unlikely that Russia-backed formation — comprising former rebels and acting autonomously from Assad’s forces — can ever form the backbone of the renewed armed services. Even so, Russia’s backing may yield some benefit by making the upcoming Syrian elections in 2021 appear more democratic.

On July 28 the Fifth Corps’ Eighth Brigade welcomed 900 new fighters at a graduation ceremony in Bosra al Sham, Daraa province. The ceremony took place near the ancient citadel Bosra under the flags of both the Syrian Arab Republic and the Syrian Army. Also present were the local protesters chanting anti-government slogans such as “Bashar, we are coming for you” and “Assad’s regime will fall” and holding placards demanding the release of political prisoners. Russian military police were reportedly also at the scene, quietly observing from the sidelines. The ceremony marked an important milestone for the Eighth Brigade, considering its modest headcount of just 2,000 fighters prior to the ceremony.

The battalion’s commander, Ahmad al-Oda, is a former leader of the opposition group Shabaab al-Sunnah, which joined the revolution in 2011. Al-Oda is also rumored to have participated in recruiting Syrian fighters to assist Libyan warlord Khalifa Hifter. As Foreign Policy Magazine reported, it was Col. Alexander Zorin who oversaw the recruitment drive for Hifter's forces. In 2016 Zorin served as the Russian Defense Ministry’s envoy to the Geneva-based task force and visited the south of Syria in early April. According to sources among the Russian military who spoke to Al-Monitor on condition of anonymity, however, Zorin’s April visit had nothing to do with recruiting new fighters for Hifter but was concerned instead with negotiations regarding the Iranian presence in Syria and the release of prisoners. As a result, the Russian military opened a station in Daraa to collect information on prisoners detained by Damascus directly from their relatives. The measure’s real purpose appears to be a largely symbolic gesture of reconciliation. According to local lawyers, the Central Committee — a body that unites rebels who accepted the reconciliation pact — already issued Russia the list of detainees it sought.

That is not to suggest, however, that Russia’s patronage of the Eighth Brigade (a formation that has largely served tactical, not strategic purposes) has been inconsequential. At the end of June, the Eighth Brigade exchanged gunfire with the Syrian security services in a deadly checkpoint clash, setting off a series of escalatory actions. On June 20, a bus carrying soldiers from the Eighth Brigade hit an improvised explosive device in eastern Daraa province. The explosion left nine dead and 13 wounded and sparked protests against Hezbollah and Iran, whom the locals blamed for planting the bomb. The accusations are hardly surprising as pro-Iranian forces had on several occasions attempted to attack the former rebels active under the Fifth Corps umbrella.

Southern Syria, the cradle of the country’s revolution, now serves as a compelling example of what can happen to a former rebel territory with lingering anti-Assad sentiments that was returned to the regime’s control. More pertinently, it is also an indicator of Moscow’s desire to find a stable compromise with regional and sub-regional players. In 2018 Russia, the United States, Israel and Jordan reached a deal on reconciliation between Damascus and territories in southwestern Syria. Moscow’s aim at the time was to create a so-called "Sunni buffer" on the border with Israel in an attempt to minimize the presence of the Islamic Revolutionary Guard Corps (IRGC), as well as other local and foreign militias loyal to Tehran who had threatened Israel with opening a new Syrian front to bolster the so-called "axis of resistance."

Consequently, Russia emerged as a de facto security guarantor for ex-rebels in the southwest in exchange for their role in fighting the Islamic State. Already by April 2019, former rebels from the Syrian Free Army’s Southern Front made up more than three-quarters of all the fighters in the Eight Brigade of the Fifth Volunteer Corps active in Daraa province. The brigade had for a number of years been managed directly by a Russian general and there were Russian officers at different levels of command. Those efforts bore fruit in the end, as local forces succeeded in suppressing the IS insurgence and turned hundreds of fighters over to Assad’s security services.

Having said that, however, the Eight Brigade and locals in Daraa province have also encountered some obstacles along the way. First of all, they have been facing stiff competition for the allegiance of former rebels, most notably from Maher Assad, the president’s brother and a commander of the Syrian Army’s Fourth Division. Assad maintains tight links with Iran, while the Fourth Division comprises many pro-Iran units, including the foreign ones. The division also serves as a cover for the activities of Hezbollah and the IRGC. The Eighth Brigade launched several attacks on the Fourth Division’s checkpoints in retaliation for the regime’s repression. Russian military police in the area reportedly sided with the ex-rebels.

Secondly, southern Syria suffered a drop in living standards following the dissolution of local councils (civilian authorities in rebel-held areas assisting the population with everyday matters), as well as the shutting down of nongovernmental and civil society organizations. Thirdly, the terms of the reconciliation agreement between the regime and ex-rebels are not always observed. Damascus has been accused of repression, conducting criminal investigations into former opposition members over dubious charges and arbitrary detentions.

All this presents Moscow with a conundrum. If Russia is prepared to stand by the Eighth Brigade or other units under the Fifth Corps umbrella, it needs to coordinate its actions with Damascus. The Syrian regime is wary of Moscow’s support to ex-rebels and sees it as an abetment to autonomy in the south and a threat to its smuggling networks. In June, the secretary of the Syrian People's Council, Syria's parliament, Khaled al-Abboud, called on Russia to give up its protectorate over the armed groups that are part of the local reconciliation deal concerning Daraa and to walk back the agreement entirely.

Going forward, it is not unfathomable that Moscow will use the factor of Syria’s "grey zones" — where the government’s control is not absolute — to boost the legitimacy of the Assad regime. A degree of protest vote in the upcoming 2021 election might create an appearance of liberalization within the country in the eyes of foreign journalists. This "liberalization" can then be presented as means to appeal to potential investors in the region.

If Russia is trying to create a renewed Syrian Armed Forces on its own terms, this ambition requires investing substantial resources on a countrywide scale, given countervailing efforts on behalf of Iran to strengthen the Fourth Division and the Republican Guard. Any halfhearted measures would therefore risk exacerbating tensions with Damascus and lead to new skirmishes and hostilities, causing even more human suffering.