Residents of Daraa city are living in fear in light of increased assassinations and kidnappings often blamed on former rebels who reconciled with the government. 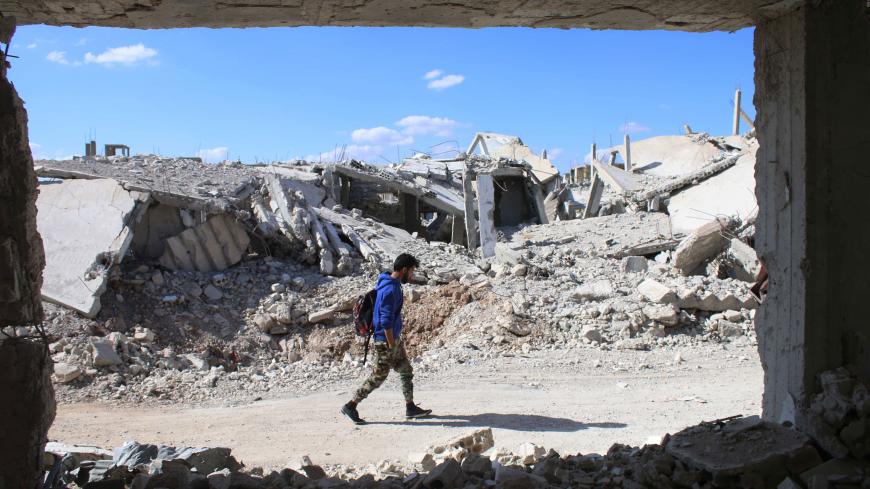 A man walks past destroyed buildings in a rebel-held area of the southern city of Daraa, Syria, Nov. 6, 2017. - MOHAMAD ABAZEED/AFP via Getty Images 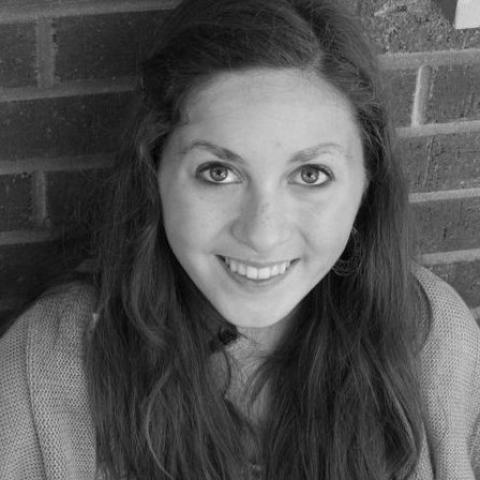 The three bodies were bloodied from apparent gunshot wounds and found dumped unceremoniously near a traffic circle. They belonged, residents would discover, to three young men from a former rebel-held neighborhood of Daraa city in southwestern Syria, where they had lived until their alleged kidnapping in early January.

Mohammad Abazeid was a young taxi driver and former rebel fighter, found maimed and lifeless on the street, nearly a week after his alleged kidnapping.

Hundreds of men attended his funeral on Jan. 14, which morphed into an impromptu anti-government protest march through the city’s southern reaches.

The killings, according to fearful residents who spoke to Al-Monitor by phone, warn of violent escalation closer to home as more than a year of simmering unrest across rural Daraa province has largely spared much of Daraa city itself. And accusations that pro-government gunmen carried out the murders are one sign of increasingly “politicized” violence creeping into the city’s former rebel-held neighborhoods, even as government forces are technically barred from entering, according to one Syrian researcher who requested anonymity for security reasons.

One woman in Daraa al-Balad said she no longer left her home at night, ever since “fear increased” among her friends and family following discovery of the three bodies at the traffic circle earlier this month.

The site of the Syrian revolution’s first mass protests in 2011, Daraa later came under the control of opposition forces whose territory stretched along much of the Jordanian border.

But starting in 2016, the Syrian government and its allied forces seized pocket after pocket of rebel-controlled territory in deadly succession. In their wake they left flattened ghost towns where hundreds of thousands of people had once lived. Many of them were bused away to opposition-held Idlib province in Syria’s northwest, as part of evacuation deals following recapture.

By the summer of 2018, only Daraa and Idlib remained. The government turned southward.

Recapture didn’t take long. Several weeks after the campaign’s launch — and after hundreds of thousands of people were displaced from their homes — Daraa was finally back in government hands, largely due to a patchwork of surrender deals and negotiations with rebel leaders on the ground.

In the province’s eastern reaches that meant surrender in return for the promise of public services, release of detainees and the creation of a Russian-backed “Fifth Corps” group aimed at reintegrating former rebels into the Syrian armed forces. Many former rebel commanders reconciled with the government.

But in former rebel-held neighborhoods of Daraa city itself, as well as other towns spread across the western countryside, the government would go on to hold only nominal control, with ex-rebels largely maintaining some degree of autonomy — and keeping hold of their light weapons.

In neighborhoods such as Daraa al-Balad in the provincial capital, that meant relative freedom to continue holding public protests, even as public services including water and electricity languished. There, government security personnel do not have an official presence.

“They can observe who enters and who leaves Daraa al-Balad, but they cannot enter [themselves],” said the Syrian researcher.

In the year and a half since the government’s recapture, assassinations, kidnappings and drive-by shootings by unknown gunmen have become a near daily occurrence across much of Daraa province.

The past year has seen some 262 assassination attempts, with at least 152 killed, by one recent count.

Much of the violence has taken place in neglected towns and cities that scatter rural western Daraa province, where assassinations of local figures are common. But eastern Daraa has also seen rising tensions in recent weeks, with gunmen earlier this month storming pro-government checkpoints and holding at least a dozen personnel hostage before Russian mediators negotiated their release.

Residents told Al-Monitor the violence was in retaliation for detainment of a local man at one of the targeted checkpoints.

“I’m more afraid of the checkpoints now [due to continued arrests and disappearances]," said one man in Daraa’s western countryside, in response to the incident. “I go out of the house, but I don’t make my plans known. People are afraid of traveling outside of town in general.”

For people living in former opposition-held neighborhoods of Daraa city that means staying largely within those neighborhoods, for fear of the government checkpoints that lie in wait on the roads outside. So they are afraid of both the government and ex-rebels.

Still, until now, the government’s security personnel do not officially maintain a presence within recaptured neighborhoods like Daraa al-Balad.

But residents and local media are now blaming a wave of recent kidnappings inside former rebel-held neighborhoods of the city on gunmen loyal to the government’s Military Intelligence branch. They point toward one divisive local figure in particular: Mustafa al-Masalmeh, known commonly as “al-Kessm.”

Once a rebel commander, Masalmeh later reconciled with Damascus following the capture of Daraa province in 2018, reportedly becoming affiliated with the government’s Military Intelligence branch. It isn’t clear what his exact role is. In doing so, he became the target of multiple assassination attempts by former rebels living in Daraa city.

In late December 2019, one such attack saw Masalmeh’s brother, Wissam, killed when assailants blew up his car with an explosive device.

“Things are extremely tense right now in the city,” said one man, who lives in Tariq al-Sadd, another former rebel-held neighborhood near Daraa al-Balad. “As soon as the sun goes down, I don’t go outside much. Even local shops have started closing early.”

The kidnappings have only continued. On Jan. 19, reports of yet another kidnapping in Daraa surfaced, after a veterinary student and former rebel fighter seemingly disappeared while walking home from classes. The men have yet to resurface.

The violence isn’t necessarily “a new thing,” according to the researcher who spoke with Al-Monitor. “But it’s more politicized now,” as discontent heats up over Masalmeh’s alleged role in recent killings.

Al-Monitor has withheld the names of all Daraa residents quoted in this report, to protect their safety. 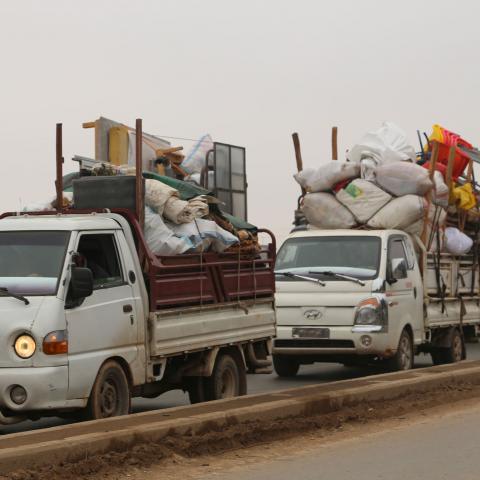 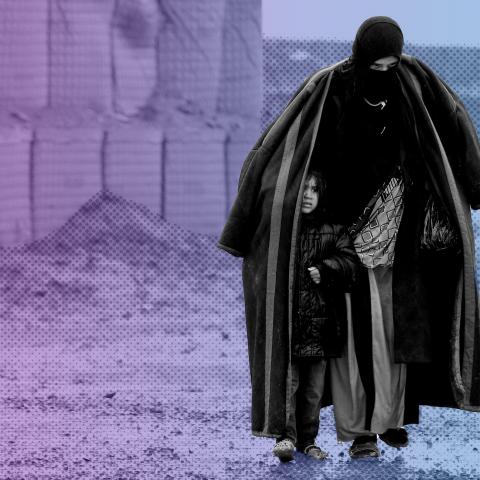