Russian warplanes escalated their shelling of Idlib amid field clashes between Hayat Tahrir al-Sham and the Syrian government forces in the countryside of Aleppo. 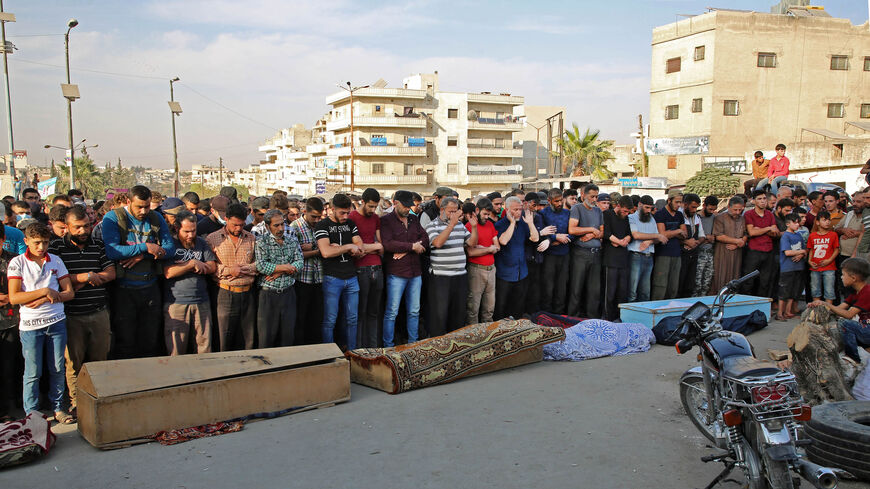 Syrians take part in the funeral of 10 fighters with the Turkey-backed Faylaq al-Sham rebel faction in Syria, in the northwestern city of Idlib, following their death in a Russian airstrike, Syria, Oct. 26, 2020. - Mohammed al-Rifai/AFP via Getty Images

Russia has recently escalated its attacks in areas of Syria’s northwestern province of Idlib, coinciding with clashes between Hayat Tahrir al-Sham (HTS) and Syrian government forces in the area.

Military sources from HTS told Al-Monitor, “HTS carried out an incursion against the regime forces in the western countryside of Aleppo.”

The operation Oct. 4 resulted in the killing of five members of the regime forces, the seizing of their weapons and the destruction of their positions in the area, according to the sources.

Asked to comment on the incident, Hammam Issa, an Idlib-based journalist, told Al-Monitor, “The Syrian regime forces have launched another round of escalation in the areas under the control of HTS. With Russian air support, regime forces continue to target civilians, as Russian warplanes launched more than 11 raids over the past two days. In response, the Syrian National Army [affiliated with the Turkish-backed Free Syrian Army (FSA)] and HTS beefed up their military presence in Idlib countryside after Syrian regime forces spread in the area.”

He said, “The contact lines with the Syrian regime forces around Idlib province recently witnessed military reinforcements on the part of the regime forces, the [regime-affiliated] National Defense Forces and the 25th Special Mission Forces Division [an elite formation of the Syrian army], most of which were concentrated in the eastern and southern Idlib countrysides.”

Izzeddine Abu Ahmad, an HTS military commander, told Al-Monitor, “The Russian escalation against the liberated areas is aimed at pressuring Turkey to accept the Russian initiative to normalize relations with the Assad regime and keep the regime afloat.”

He added, “The factions are militarily ready to confront the regime. The recent period witnessed the graduation of several new military brigades and groups in HTS. The factions are constantly monitoring the regime activity, and there are currently no large regime mobilizations on the outskirts of the liberated areas. We have monitored some movements on the part of the regime forces, but they do not seem to indicate a military attack, as they are mostly normal movements.”

Abu Ahmad added, “The Russian message is we either comply with Russia’s conditions, which include having us surrender to the Assad regime, or else we face military escalation. Reports about a current movement of displacement in Idlib are not true. Only in the villages of Jabal al-Zawiya the people were displaced after they received information about the Russians’ intention to launch an air campaign on that area, but many of them returned later.”

Omar al-Hamoud, FSA captain operating in Idlib, told Al-Monitor, “We are fully prepared for any attack the regime forces might launch. There are military movements on the part of regime forces on axes in Idlib, but they are not major movements. We are acting as if such crowds — no matter how few and ordinary they are — are going to attack us. We are constantly building sites and digging tunnels and trenches.”

He noted, “We may witness more violent Russian bombing in the coming days to place pressure on us and on Turkey in order to accelerate Turkish rapprochement with the Assad regime. But we shall not succumb to extortion, even if Turkey reconciles with the regime. We shall neither accept that nor go along with it.”