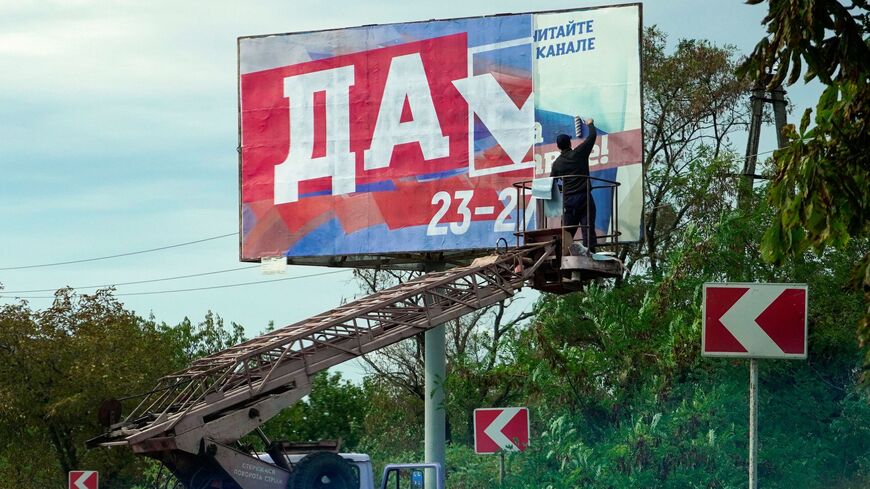 A man glues a referendum poster reading "Yes" in Berdyansk on Sept. 26, 2022. - AFP via Getty Images

Alena Ohonesian, vice president of the Ukrainian Squash Federation, said Oct. 5 that her country had withdrawn from the upcoming Women's World Team Squash Championship that Egypt will host in December in protest of Cairo’s support of Russia’s annexation of the Ukrainian regions.

“Last week, the aggressor held a referendum on the annexation of our territories, and unfortunately there were representatives from Egypt at this pseudo referendum, who confirmed that (in their eyes) the referendum was fair,” Ohonesian said. “Therefore, we were forced to make the decision to cancel the trip.”

Although Cairo has not made any official comment on Moscow’s move, on Oct. 13 Egypt joined other countries in voting in favor of a UN resolution condemning Russia’s annexation of the Ukrainian regions. Egypt said its vote for the resolution was in line with its commitment to the UN charter rejecting the use of force in international relations.

“Instead of focusing efforts to launch negotiations with Russia to resolve the conflict, the Ukrainian government is trying to blackmail the world,” Haridy told Al-Monitor. “Pursuing its same policy of blackmailing Europe with US help, Kyiv is also seeking to extort other countries that refuse to side with either Ukraine or Russia, including Egypt.”

Egypt’s relations with Russia have dramatically improved in recent years. The two countries signed a strategic cooperation treaty in 2018 intended to bolster bilateral trade and other ties. Egypt is also building its first nuclear power plant with a $25 billion loan, 85% of which is provided by Moscow. Cairo has also bought billions of dollars worth of Russian weapons since 2014.

Despite its close ties with Moscow, Cairo has sought to chart a middle diplomatic course on the Ukraine crisis, calling on both Moscow and Kyiv to pursue dialogue to resolve their dispute.

Egypt, whose economy has been hard hit by the consequences of the Ukraine war, is a member of an Arab liaison group including Jordan, Algeria, Iraq, Sudan and the UAE that seeks to mediate a resolution to the conflict.

Russia and Ukraine are major wheat exporters to Egypt, the world’s largest wheat importer. Tourists from the two countries also account for around 40% of tourist flows into the country, according to the Egyptian Tourism Ministry. Tourism is one of Egypt’s major foreign currency earners, bringing the country $13 billion in 2021.

In what seems to be a deterioration of events in Ukraine, the Egyptian Embassy in Kyiv called Oct. 14 on all Egyptian nationals to leave the country as soon as possible.

“Egypt favors seeing both Ukraine and Russia sitting at the negotiating table to agree on a cease-fire and a peace treaty that preserves the interests and rights of the two countries and maintains their security,” Haridy concluded.