Russia is testing the readiness of the Syrian government forces in their area of deployment on the outskirts of Idlib, in what some fear is a prelude to a wide-scale military operation to uproot the opposition in northwest Syria. 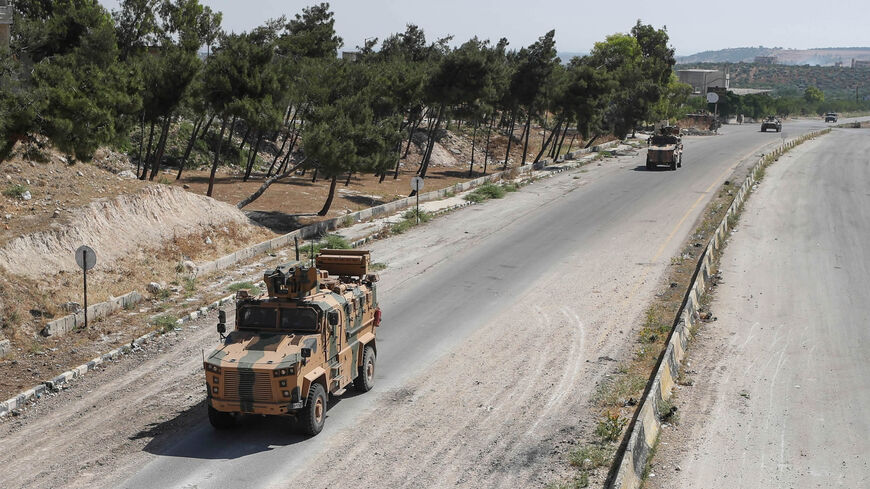 Military vehicles of a joint Russian-Turkish patrol pass through the M4 highway, which links the northern Syrian provinces of Aleppo and Latakia, near Ariha in the rebel-held northwestern Idlib province, Syria, June 10, 2020. - Omar Haj Kadour/AFP via Getty Images

ALEPPO, Syria — The Syrian government forces, under the supervision of Russian forces, conducted in early October various military training exercises in the mountainous areas in the countryside of Latakia province, adjacent to Idlib in northwestern Syria.

Earlier, similar military exercises were carried out in the east of the capital Damascus.

The Syrian Defense Ministry said in an Oct. 10 Facebook post that the military exercises were held in the presence of the chief of the General Staff of the Syrian army, Gen. Abdul Karim Mahmoud Ibrahim, and the commander of the Russian forces operating in Syria, Gen. Aleksandr Chaiko, as well as several senior Syrian army officers and Russian officers.

It continued, “The exercises lasted for several days in cooperation with the Russian forces operating in Syria. The forces conducted a tactical operational project using live ammunition that simulates the real combat conditions in mountainous areas, rugged terrain and forests.”

A military source close to the Syrian government forces told Al-Monitor on condition of anonymity, “During the military exercises, various weapons and military vehicles were used, including [armored] cars, motorcycles, artillery, rocket launchers, warplanes and helicopters.”

He added, “The exercises took place in the Salma area in the northern countryside of Latakia, specifically in the mountainous area in Marj Khokha and in villages in the countryside of the Salma area, which is almost empty of residents because it is close to the lines of contact with Hayat Tahrir al-Sham [HTS], which is based in Idlib, its stronghold.”

The source explained, “The exercises simulated a ground military operation waged by the Syrian army and its allies against HTS and the opposition factions entrenched in the mountainous areas of Latakia countryside and in the southwest of Idlib province.”

Opposition circles fear that the Russian training of the Syrian government forces on the outskirts of Idlib is part of preparations for a new military operation to take hold of new areas in northwestern Syria.

Col. Mustafa Bakour, an officer in the Turkish-backed Free Syrian Army (FSA) who is based in Idlib, told Al-Monitor, “Since the beginning of the Russian invasion of Syria, the Russian forces have continuously worked to raise the level of combat readiness of the Assad militias, and to occupy the liberated areas and return them under Syrian authority.”

He noted, “It is in this context that the Russian forces carry out joint military exercises and maneuvers from time to time.”

Bakour said, “These exercises carry many messages, the most important of which is that Russia, despite the painful blows it has received in Ukraine, is still strong and in control of the situation in Syria, which it considers an advanced base in the Middle East.”

He noted, “Also the exercises near the areas where the FSA and the opposition forces are present are aimed at putting pressure on Turkey and the opposition, and it is further proof of Russia’s plan to complete what it had started more than seven years ago to reestablish Assad’s authority over the remainder of the liberated area.”

Bakour added, “This is not something the Russians hide, looking at their statements. This is why I believe there is a possibility that these exercises aim to launch a military operation later.”

At the beginning of October, the commander of the Syrian forces’ Fourth Armored Division, Maher al-Assad, the brother of Syrian President Bashar al-Assad, appeared alongside Chaiko, during military maneuvers of the government forces east of Damascus.