As the local currency continues to deteriorate, Lebanese are having trouble supplying olives and olive oil this year. 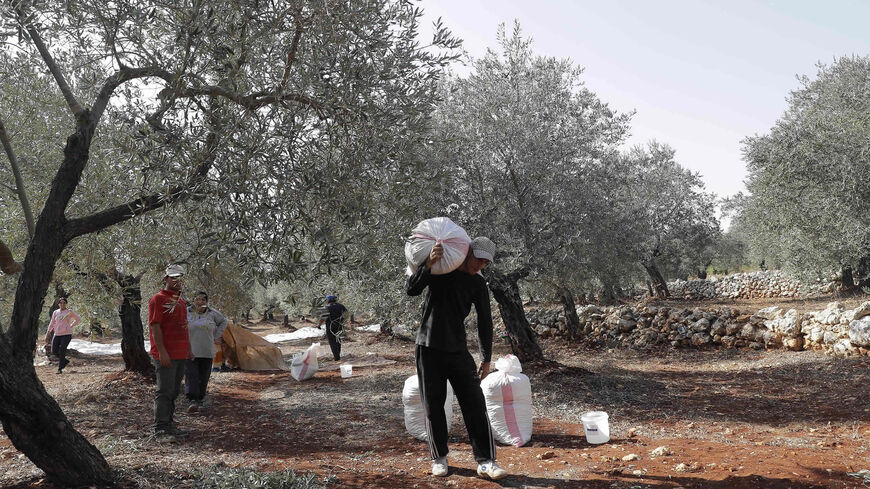 A Lebanese worker carries a bag of harvested olives as he walks through a field in the town of Batroumin, north of Beirut, Lebanon, Oct. 20, 2017. - Joseph Eid/AFP via Getty Images

BEIRUT — As Lebanon continues to reel under a devastating economic crisis that has affected almost all aspects of life, people were recently shocked with the unprecedented high price of a 16-kilo tin of olive oil, which reached around $120, or approximately 4.5 million Lebanese pounds at the black market rate, which is equivalent to a month's salary for many employees in the small Mediterranean country.

During the first week of autumn, families in different Lebanese villages, especially in the south and the Bekaa Valley in the east, get together for the olive picking season. Part of the olive harvest is pickled in glass jars, and the other part is taken to the mills to be pressed into olive oil.

The olive tree is an integral part of the culture of many farmers and villagers, with olives and olive oil being a staple to many traditional dishes in Lebanon.

However, the price of olive oil has been gradually increasing since the economic crisis broke out three years ago, so many Lebanese now see it as a luxury product and only buy small quantities.

Safia Dayoub, a widow who lives with her three children in the Barja area of the Chouf district, told Al-Monitor, “I bought two olive oil tins this year instead of my usual three. My children paid the $240; my son works at a supermarket and my daughter is an English tutor.”

She said, “Olive oil has become very expensive, but it is a basic commodity in our house. We cannot dispense with it, but we are now using very small quantities in our dishes so our tins would last longer.”

Dayoub added, “We cannot use vegetable oil in some dishes. Plus, it has also become expensive because it is imported.”

Before the economic collapse and the ensuing deterioration of the local currency, a tin of olive oil was sold at between $80 and $100.

Despite the economic crisis that has afflicted the country since October 2019, farmers continue to harvest olives, as it is a basic source of livelihood for many.

Ali Hadla, a 46-year-old employee of Electricite du Liban, Lebanon’s state-owned electricity provider, from the town of Labaya in the western Bekaa Valley, told Al-Monitor, “I own 80 olive trees that produced over 1 ton of olives this year. I would say this season was acceptable.”

He noted, “Olives and olive oil are essential in the Lebanese kitchen. They are used to make mujadara [cooked lentils], manouche [flatbread topped with thyme] and even fried eggs. We also heat up a small quantity of olive oil and use it as an ointment to heal the sick.”

He added, “I have my own olive trees so I get by. But employees with low wages can barely afford to buy olives and olive oil anymore. Even vegetable oil is too expensive nowadays.”

Hadla pointed out, “The prices of olives and olive oil in US dollars have not changed much. The exchange rate is the issue here. Last year, the Lebanese pound was trading at around 20,000 to the dollar, but it has doubled this year.”

Olive mills in Lebanon are witnessing a heavy turnout after the first rain, and they are forced to raise the cost due to the continuous power cuts, which prompted many to rely on private generators.

Lebanon's farmers use the traditional method of picking olives by shaking the trees or hitting the branches with a stick so that the olives fall off — few farmers use modern machines.