Olive oil is the main source of income for 100,000 Palestinian families, yet authorities keep ignoring warning signs in the struggling sector. 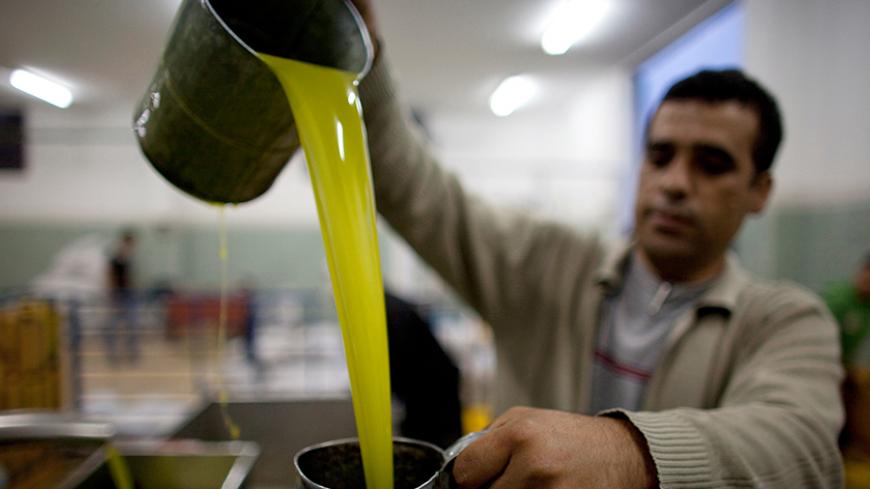 RAMALLAH, West Bank — Ahmed Suleiman, a Palestinian farmer from the town of Tell in the northern West Bank, waits all year for olive harvest season. He owns an olive grove, and when the time comes, he picks and presses olives and sends the oil to Qatar, where his son sells it. Suleiman’s olive oil production amounts to some 25 containers with a capacity of 14 kilograms each.

“Selling olive oil locally is not very rewarding. A container is sold here for between 250 and 300 shekels [$70-$80], while in Qatar it is double the price, between 500 and 600 shekels [$150-$160],” Suleiman told Al-Monitor. His son, who works as a teacher in a public school in Qatar, sells the olive oil directly to consumers, allowing Suleiman to increase his profit by limiting his expenses to shipping fees from Palestine to Qatar.

Suleiman is one of the rare, lucky Palestinian farmers in having a son abroad able to market his oil. The majority of farmers find themselves forced to sell their product at prices lower than those in foreign markets.

According to Palestinian Olive Oil Council Chairman Fayyad Fayyad, about 4,000 tons of local olive oil are sold annually in foreign markets through relatives, resulting in a good profit for farmers. Meanwhile, local market demand for olive oil amounts to between 10,000 and 12,000 tons a year. Average production totals 22,000 tons annually. Fayad told Al-Monitor that new markets need to be found to sell Palestinian oil at prices higher than the local market allows.

The price is determined according to the “olive load,” that is, the amount of fruit the trees bear every year. The annual harvest runs from Oct. 15 until the end of December and is conducted collectively throughout the West Bank. The marketing of the final product has recently become a topic of disagreement between farmers and officials.

While farmers complain of a marketing crisis, officials and institutions in the olive oil sector deny that such a problem exists, stressing that the annual harvest used to produce 30,000 tons of oil, but in the past 10 years that number has fallen to 22,000 tons.

“There is no marketing problem in Palestine in general, as production has declined in light of a decrease in productivity of the olive trees,” Fayyad told Al-Monitor. “Therefore, there has been no surplus.” This year, in fact, there might even be a small local shortage should production be lower than expected.

Fayyad expects this season's harvest to fall short of market needs, because production is not expected to exceed 18,000 tons. Meanwhile, there has been an increase in the domestic demand for olive oil, as the Gaza market has changed. Palestinians in Gaza on average produced and consumed 3,000 tons of olive oil annually, but as a result of the 2014 war with Israel, a large number of olive trees were damaged, so production fell to only 1,000 tons.

Khaled Mansour, director of the Palestinian Agricultural Relief Committee (PARC), concurred with Fayyad that there should not be a problem selling oil from the current harvest on the local and Arab markets. Nonetheless, difficulties selling oil has over the years been a recurring problem, prompting the concerned parties to develop a plan to boost the sector. Mansour noted that olive production has been a source of livelihood for Palestinians for thousands of years. According to PARC, olive oil is the main source of livelihood for 100,000 Palestinian families.

“Jordan used to import olive oil from Palestine, but today it has its own production and even a surplus, so we are left with the other Arab markets,” Mansour told Al-Monitor. “We face the problem of high production costs, which makes Palestinian oil more expensive compared to competing Tunisian and Moroccan oil and other international products.”

Mansour said there is a need to develop the product, such as through the production of organic olive oil, which is in high demand in Europe and elsewhere, to be able to compete on global markets and ensure that it can be sold at international prices. Fayyad remarked that Palestinian olive oil is considered the finest in the Arab world, but it has a different reputation in Europe's eyes because Palestine's rudimentary processes for collection, pressing and bottling are often not in line with international standards.

Like Fayad and Mansour, the Ministry of Agriculture also does not perceive a marketing problem, especially since it recently closed all doors to imported oil. “There are no oil imports according to the law, except for the years when production is scarce,” Ramez Obedi, head of the ministry’s Oil Department, told Al-Monitor. “We set forth a strategic plan to enhance the quality and quantity of production in order to open new channels for marketing.”

Fayyad, who was among the plan's developers, said it is the best option on the national level, but stressed that even there, it is thus far a dead letter. He explained, “The plan is for the years 2015 and 2016. However, 2015 is about to end, and we have yet to implement its first item.” Until the plan is acted upon, Palestinian oil production will remain unregulated, fail to contribute substantially to the Palestinian economy and continue to be driven primarily by the emotional connection generations of farmers have had with their trees as symbols of Palestine.