Iraq's new president commenced his duties, and the designated prime minister will form his Cabinet next week. 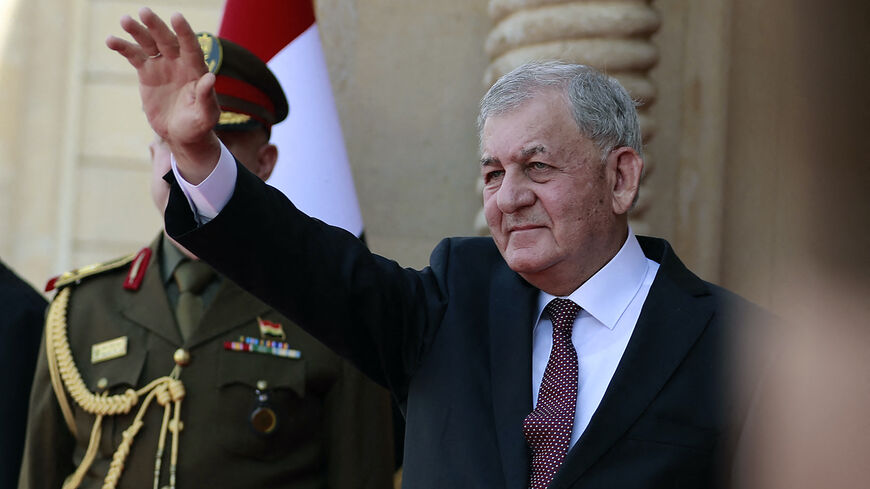 Latif Rashid, a veteran political leader in the Patriotic Union of Kurdistan (PUK) who was elected Oct. 13 as Iraq's new president, commenced his duties in Al-Salam Palace in Baghdad on Monday.

Rashid designated Mohammed Shia al-Sudani as prime minister on the same day of his election. Sudani is currently negotiating with political parties over the formation of a Cabinet. He has one month to do so and to get parliament's vote of confidence for both himself and his Cabinet.

Sudani is a lawmaker from the Coordination Framework (CF), which became the largest block in parliament after lawmakers aligned with leader Muqtada al-Sadr and the Sadrists withdrew from parliament in June. The CF consists of Shiite parties close to Iran.

The State Management Coalition, which consists of the CF and its Sunni and Kurdish allies, announced today that the parliamentary session to vote on Sudani's Cabinet will be held Oct. 22.

Sudani invited Sadrists to participate in his government, but Sadr has so far rejected this proposal.

If Sudani succeeds, this will be the first government since 2003 without the participation of Sadrists, presenting a governance challenge given Iraq's political fragility.

The political division is not only within the Shiite faction; there are also splits among Sunni and Kurdish groups as well.

In a significant sign of the political division, outgoing President Barham Salih did not stay in Baghdad for the formal handing over of duties to Rashid.

This is unprecedented, as the new president has traditionally commenced his duties in the presence of the outgoing president.

The selection of a president was a controversial issue that halted the process of forming the new government for about 10 months.

Salih was supported for re-election by the PUK. Meanwhile, the Kurdistan Democratic Party (KDP) nominated Hoshyar Zebari first, yet his nomination was rejected by the Federal Court based on accusations of corruption. The KDP then nominated Interior Minister of the Kurdistan Regional Government Rebar Ahmed, whose nomination was opposed by the CF and the PUK.

Finally, the two Kurdish political parties agreed on Rashid and his nomination received support from the CF.