Israeli Prime Minister Yair Lapid has joined condemnation from across the globe against the Russian attack on Kyiv and other Ukrainian cities. 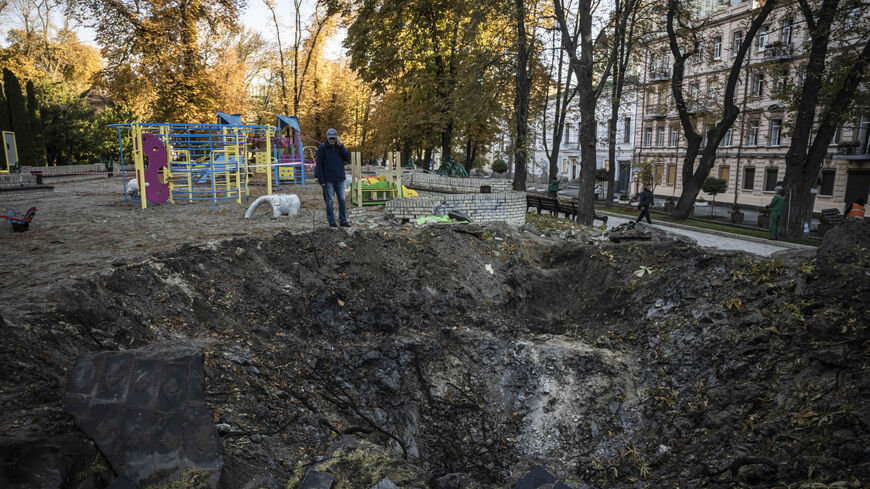 People look at the crater left by a missile strike on a playground in Taras Shevchenko Park the day before, Kyiv, Ukraine, Oct. 11, 2022. - Ed Ram/Getty Images

Waiting until the end of the Jewish Sukkoth holiday, Prime Minister Yair Lapid condemned on the evening of Oct. 10 the Russian attack on Ukrainian cities. “I strongly condemn the Russian attacks on the civilian population in Kyiv and other cities across Ukraine. I send our sincere condolences to the families of the victims and the Ukrainian people,” tweeted Lapid.

Lapid’s public condemnation of Russia was the first he issued in his position as prime minister. As foreign minister, Lapid had condemned the Russian invasion Feb. 24, saying it was “a serious violation of the international order." At the time, he was the most senior member of the Cabinet to criticize Russia directly.

Earlier in the day, Ukraine's Ambassador to Israel Yevgeny Kornichuk told Ynet that his country continues to implore Jerusalem to change its policy and provide Kyiv with military aid. "I realize that Lapid is one of our great supporters, but I’m exhausted. For the last seven months I’ve been pleading Israel to change its stance, and I would have loved that to happen.… We have spoken with the prime minister and the foreign minister; I don't know what else needs to happen for Israel to change its policy."

Kornichuk continued that according to public opinion polls commissioned by his embassy, more than 80% of Israelis support Ukraine. He argued that Israeli politicians use fear of Russian presence in Syria to avoid the issue of sending military aid. Russia has withdrawn its forces from Syria because of the ongoing war with Ukraine, claimed Kornichuk, so therefore there is no real threat of Russian intervention in Israeli affairs in Syria, and no real excuse for Israel for refusing to help Ukraine.

When Russia first invaded Ukraine, Israel sent significant humanitarian assistance to Ukraine, but refrained from sending any military equipment. Then, in April, Defense Minister Benny Gantz announced a shift in Israeli policy, saying Israel will send to Ukraine defense equipment such as helmets and vests.

On Oct. 10, Meretz head Zehava Gal-On was the only Israeli politician openly calling to provide Ukraine with defense systems and weapons. "This could have consequences vis-a-vis the Russians, but I don't think it will be devastating. Israel will know how to cope," she wrote on Twitter.

She also referred specifically to the Ukrainian request to receive the Israel-US jointly developed Iron Dome anti-missile defense system. "Ukraine asked the United States to equip itself with an Iron Dome, but Israel resisted. We must remove this objection. It is the moral thing to do when civilians are targeted by Iranian missiles due to the madness of a bloodthirsty tyrant. Give Ukraine an Iron Dome," Gal-On continued.