Ultranationalist Itamar Ben Gvir is exploiting an incident in which he brandished a gun in the east Jerusalem Sheikh Jarrah neighborhood ahead of the Nov. 1 elections. 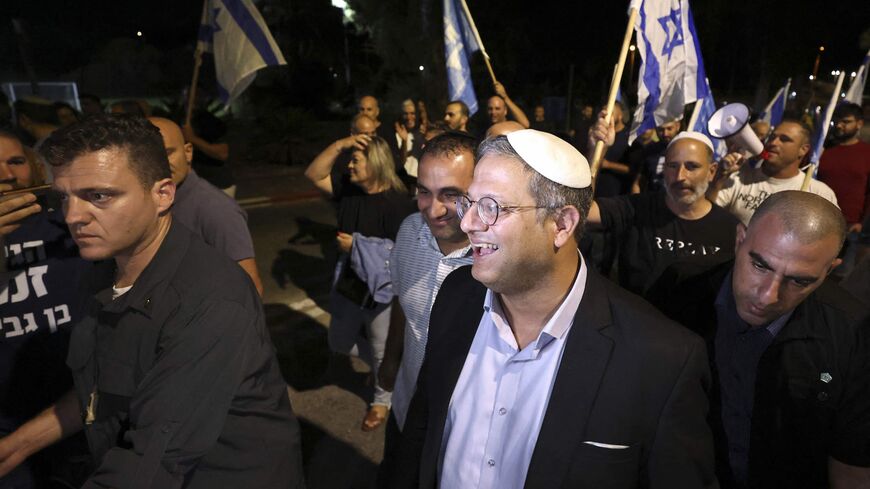 On Oct. 13, ultranationalist Knesset Member Itamar Ben Gvir was caught on camera pulling out his gun in east Jerusalem’s Sheikh Jarrah neighborhood. The incident generated commotion in the media, which might have been what motivated Ben Gvir to begin with.

Sheikh Jarrah has become a major pressure point in Jewish-Arab relations in Jerusalem, with Palestinians throwing rocks at Jewish passersby and Jewish settlers provoking Palestinian activists. Ben Gvir often shows up in such volatile places and even set up a makeshift office in the neighborhood, at the ancient tomb of Simon the Just. As a member of Knesset, Ben Gvir has immunity, which makes it difficult to remove him.

The Oct. 13 gun incident took place following news that Palestinians had hit Jewish worshipers with stones. Ben Gvir rushed to the neighborhood, and then accused Defense Minister Benny Gantz and Minister of Internal Security Omer Bar Lev of incompetence and cowardice. “Instead of shooting the assailants or at least arresting them, the police made do with pushing them back,” Ben Gvir complained.

Then, claiming he felt threatened, Ben Gvir pulled out his gun. Police tried to remove him from the site, which provided Ben Gvir with exactly the image he wanted. Within minutes, photos and video clips of Ben Gvir with his gun became a hit on social media.

The first reaction came from parties on the left. They have warned for months of the possibility of a radical new government led by opposition head Benjamin Netanyahu, with Ben Gvir holding a senior position. He could even be appointed Minister of Internal Security.

“You ask me why I’m always talking about Itamar Ben Gvir?” tweeted Meretz party leader Zehava Gal-On. “It’s because that the gun that this madman just drew is aimed at us, at all of us.”

In a radio interview the following day, Public Security Minister Omer Bar Lev of the Labor Party blamed Ben Gvir for the tensions in the West Bank. “Not only did Ben Gvir provoke Arab attacks on Jews. He also provoked attacks by Jews on Arabs. … Pulling out his gun achieved the opposite of what he hoped.”

Ben Gvir responded by attacking the left: “The left is raging because a Jew pulled out a gun in response to a life-threatening situation in East Jerusalem. ... We have a sacred obligation to restore governability, to restore security.”

With two weeks until the election, Ben Gvir is also taking advantage of attacks from Jewish organizations in the US, which are disturbed by his rise to power. The way he sees it, such attacks are further proof to his supporters that he is doing the right thing.