Delegations from Israel, Lebanon, the United States, the United Nations and France gathered in Naqoura, Lebanon, to make the agreement on the Israeli-Lebanese maritime border official. 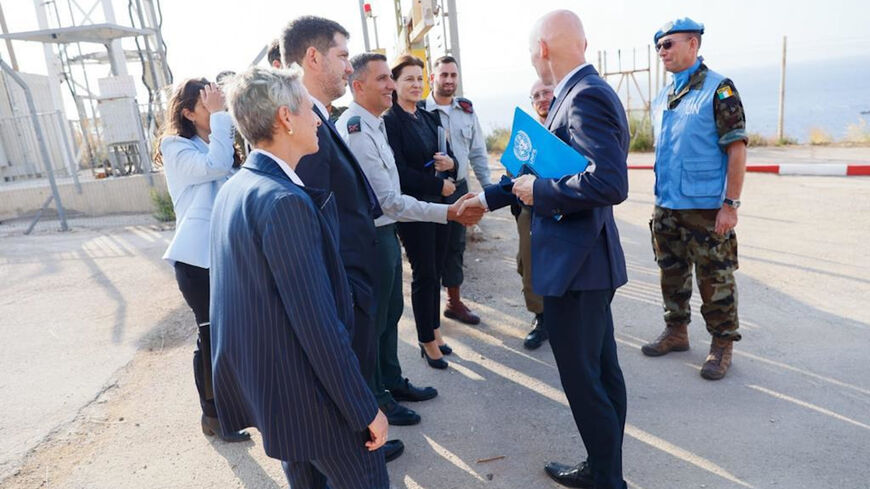 The Israeli delegation arrives at the United Nations Interim Force to Lebanon headquarters in Naqoura, Lebanon, for the signing of the maritime border agreement with Lebanon, Oct. 27, 2022. - Sivan Shachor/GPO

Israel and Lebanon have signed their US-mediated maritime boundary agreement. The two delegations inked the deal at the UN Interim Forces in Lebanon (UNIFIL) headquarters in the Lebanese border town of Naqoura, where several of the US-mediated talks took place.

Reports over the past week said that the Israeli and the Lebanese delegations would each sign the agreement in a separate room. According to Israeli press reports this afternoon, both delegations were in the same room during the signing, which took place in the presence of US mediator Amos Hochstein and United Nations special coordinator for Lebanon Joanna Wronecka. There were no handshakes nor family pictures. Israel was represented by Energy Minister Karin Elharar.

Lebanese President Nichel Aoun signed the agreement earlier today in Beirut. Israeli Prime Minister Yair Lapid also signed it earlier today, after the cabinet ratified it. After signing, Lapid said, “It is not every day that an enemy state recognizes the State of Israel in a written agreement, in view of the entire international community. It’s not every day that the United States and France stand behind us and provide security and economic guarantees for the agreement.”

Lapid also personally thanked President Joe Biden for the role he played in bringing about the agreement, tweeting, "Thank you President Biden for your leadership in helping bring about today's historic agreement between Israel and Lebanon. This deal will strengthen Israel's security, bolster our economy and help deliver cheaper energy to people around the world,"

Israeli Energy Ministry Director General Lior Schillat, who was part of the Israeli delegation, said in Naqoura, "Today is a significant day. With the signing of this agreement, we draw the maritime border and agree on the development of a cross-border natural gas field. This agreement represents a just and permanent solution to the maritime disagreement between Israel and Lebanon. As such, it serves the interests of both sides, enabling Israel to protect its citizens and its economic assets. Beyond the contribution of this agreement to the safety and economies of both countries, we believe this agreement will promote stability and prosperity in our region. We appreciate the Lebanese efforts to reach an agreement, and wish both peoples many years of quiet, peace and prosperity."

Israel’s Foreign Ministry Political Director Aliza Bin-Noun, also in Naqoura, stated, "The agreement is an example of cooperation for a new economic political model that the Ministry of Foreign Affairs sees as one of its main goals. It has the power to promote similar agreements with other countries, even those that have not yet established official relations with Israel."

Bin-Noun said that thanks to the extensive diplomatic efforts deployed by the foreign ministry, "the agreement receives extensive international support, including from Middle East countries. Even the UN Security Council unanimously congratulated the agreement." Bin-Noun emphasized that Israel continues to be a significant regional player, saying, "We are positioning ourselves once again as a responsible element, contributing to the stability of the Middle East region and the energy security of Europe."

Speaking at a joint press conference with Hochstein in Tel Aviv, Lapid reiterated his thanks and appreciation for Biden's commitment to reaching the agreement. Lapid also said that Israel "will become a major supplier of natural gas to Europe at the moment the world desperately needs it."