Some of the largest protests led by women started after a Sept. 30 suicide attack on an educational center in Kabul in which 53 Hazara girls were killed. 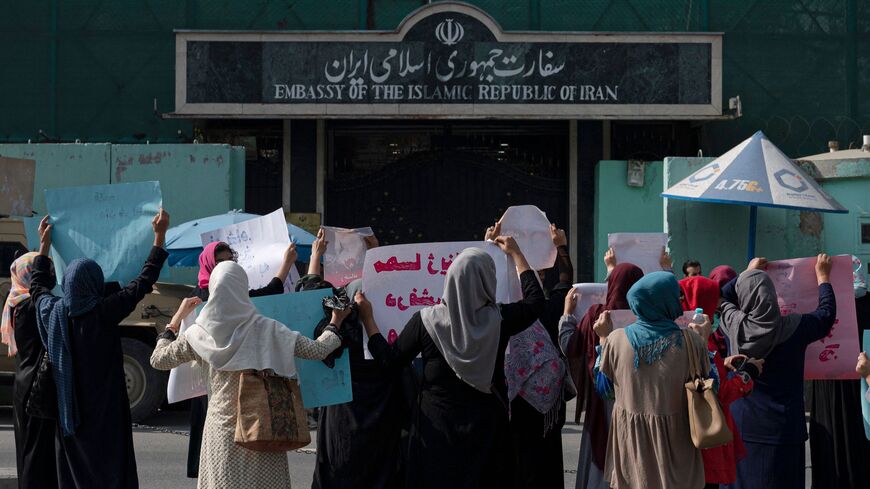 Afghan women hold placards as they take part in a protest in front of the Iranian Embassy in Kabul on Sept. 29, 2022. - WAKIL KOHSAR/AFP via Getty Images

As women-led protests spread across Iran after 22-year-old Mahsa Amini died in police custody for violating hijab laws, women in neighboring Afghanistan have also been taking to the streets.

Iran's protests quickly turned bloody, with the death toll (including security forces) currently at around 200. Though large protests have happened before, this time the tempo is more sustained and anti-regime demonstrations have spread to religious centers like Qom and Mashhad as well. While the Afghan protests are notably smaller in size and have mostly included Hazara women, they have continued apace for several weeks and university students have gotten involved. The Hazara are an ethnic minority group in Afghanistan who practice Shiite Islam and have faced ongoing discrimination from the Sunni Taliban regime.

In Afghanistan, some of the largest protests led by women started after a Sept. 30 suicide attack on an educational center in Kabul in which 53 Hazara girls were killed. Expanding to universities in Herat, Bamiyan, Daikundi, Balkh and Panjshir, the latest is Kapisa where female students from Al-Biruni University took to the streets.

Heather Barr, associate women’s rights director and former senior Afghanistan researcher at Human Rights Watch, told Al-Monitor that it is very moving to see women’s protests in Afghanistan nowadays. “These are notable for a few reasons. First, we know how brutal the Taliban’s response to women’s protests have been, so these protestors are displaying extraordinary courage — and it is very clear and noticeable that women are the leaders of peaceful opposition to violence and human rights violations in Afghanistan," she noted.

Entering their sixth week, the Iran protests may have been a catalyst and inspired Afghan women to defy a state ban on unsanctioned rallies. Speaking to Arab News, Zarmina Sharifi, a student activist from Nangarhar, said that the protests in Iran are a “symbol of resistance and awakening” for Afghan women.

A European diplomat posted in Islamabad, speaking to Al-Monitor on condition of anonymity, said “the protest of Iranian women projects a strong symbolism for women throughout the region and therefore, also for Afghan women. These days, Mahsa Amini has become very popular in Afghanistan.”

Ever since the departure of US troops from Afghanistan in 2021, the militant group has seized power and imposed restrictions reminiscent of their last stint in 2001. Barring teenage girls from attending secondary school and instructing many female public sector employees to stay at home, their government remains unrecognized internationally.

Considering that women in both countries live under repressive regimes, what do these struggles for emancipation have in common and what can they hope to achieve?

To start with, both the movements were caused by fundamentalist interpretations of Sharia, implemented in Iran by Muslim clerics and by Taliban militants in Afghanistan.

Barr said, "There are ways in which the protests in Afghanistan and Iran mirror each other, and there is growing solidarity between feminists in the two countries. Women in both countries face a similar foe: misogynistic male rulers who have made denying women and girls their full humanity central to their strategies of social control.”

Ostensibly, the Afghan women’s struggle for empowerment is tougher as they are denied employment and secondary-level education opportunities.

Torek Farhadi, an Afghan regional analyst based in Geneva, told Al-Monitor, “On the surface, from a Western standpoint, both situations might look similar but they are very different. Women in Iran have had access to education over the past 40 years and many work in government at fairly senior levels. Many own and manage businesses as well.”

For two decades, Afghan women had a hiatus from Taliban rule, but now they are back to square one.

Farhadi explained, “Women’s rights in Afghanistan have been in free-fall since the end of the communist regime. Afghan civil wars of the 1990s put a dent, but over the past 20 years, the young generation benefited from Western education and Western aid programs.”

He added, “It was expected that Taliban would crush women’s rights. But to close girl’s schools, this has gone too far for even the most conservative families in Afghanistan. Afghan women live with the compulsory scarf in their society but cannot live without education.”

The situation on the ground in Afghanistan is more challenging, the diplomat pointed out. “We must not forget that the social situation in Afghanistan is different from Iran with the new set-up in Kabul. The full emancipation of women can only occur through small but significant steps such as, in the short term, [ensuring] their right to education.”

Notwithstanding the advantage of education, for women in Iran it has been a long-drawn fight for freedom since 1979. The current administration of President Ebrahim Raisi is being blamed for these riots as it has been much harsher than the previous government of Hassan Rouhani.

Nevertheless, the new generation has changed irrevocably and schoolgirls are fearlessly abandoning the hijab.

The diplomat said, “Notably, it was the generational changes in Iranian society leading to the increase in number of educated women that gave power to Iranian society in a way not comparable to the years preceding the 1979 revolution. In this regard, Afghanistan has a long way to go. However, it is undeniable that symbolically, the ongoing events in Iran represent a wake-up call for all women in the region fighting for the full affirmation of their rights.”

One major difference between both movements is that men in Iran are supporting the women in much larger numbers now.

Farhadi noted, “In Iran, men are also coming out in the streets and that is where it is different from Afghanistan. It reflects the fact that Mahsa Amini’s death served as a tipping point, starting from covering hair, but in fact the entire population has had enough of the regime’s governance where the economic trickle-down has not worked and the nation’s vast oil and gas wealth has not been mobilized to the benefit of the people all these 42 years.”

The protests in Afghanistan are getting bigger though. Barr noted, “While many of the protestors are Hazara, there are also protestors from other ethnic backgrounds, and this represents important progress in cross-ethnic support.”

Sadly, both the regimes are prone to violent tactics. To break up an Oct. 2 protest, Taliban fighters fired in the air and the following day they locked female students in dormitories in Balkh University. Likewise, Iranian authorities have ruthlessly cracked down on protestors.

Farhadi explained, “Taliban are looking at Iran protests the same way the Iranian Akhunds do. They think the overblown demonstrations after Mahsa Amini are fomented by outside powers. Taliban have already been quick to curtail the ability of Afghan teenage girls coming out in the streets, often violently firing in the air to disperse them. Taliban and Akhunds see these demonstrations as a risk to their regime.”