Iran must strike a balance between accepting the reality of the Taliban and supporting Shiite and other ethnic groups. 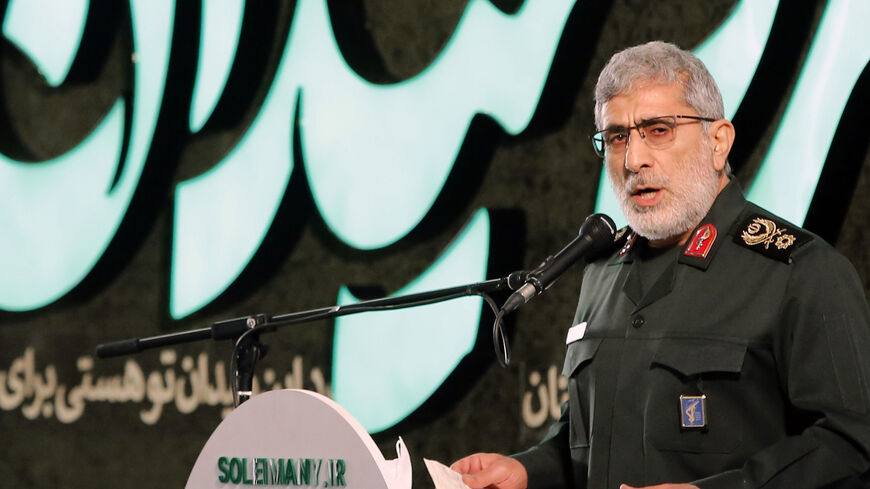 Iran’s Quds Force commander Esmail Ghaani spoke to parliament during a closed session Tuesday about the situation in neighboring Afghanistan.

According to Iranian parliamentarian Alireza Soleimani, Ghaani said Iran had a number of priorities in Afghanistan. The first was that Iran’s security in Afghanistan not be “compromised.” Ghaani said the US goal is to have Iran’s government involved in conflicts with Sunni actors. The Islamic Republic of Iran is a Shiite state and the majority of Iranians are Shiite. The Taliban is a Sunni sect from the Pashtun ethnic group, and before 9/11 it engaged in atrocities against Afghanistan’s Shiite communities.

“The Shiite of Afghanistan has a high importance for the Islamic Republic of Iran,” Ghaani said at the parliament meeting. “Iran’s efforts [are aimed at ensuring] that the situation in Afghanistan not be solved through war, and that all groups in Afghanistan have a share of the country.”

On Tuesday, the Taliban government named an interim government, releasing a Cabinet list that showed 90% of posts going to Pashtun Afghanis. There were no Cabinet posts given to members of Afghanistan’s Shiite Hazara, which are the third-largest ethnic group in the country. It is certainly Iran’s desire to have an inclusive Afghan government that includes not only Shiites but also other minority member groups such as Persian-speaking Tajiks. But Iranian officials have little influence over the group.

An article in Tasnim News Agency touched on Iran’s delicate position in Afghanistan in which Tehran must protect the Shiite community without completely distancing itself from the Taliban, which effectively rules all of the country. The article said the country must have a “realistic” approach while pursuing the country’s “revolutionary ideals.”

The article was written in response to the fighting between the Taliban and followers of Ahmad Massoud in Panjshir, who are essentially the last pocket of resistance to Taliban rule. Some Iranians on social media have expressed sympathy for the Panjshir resistance and question the Iranian government for not helping them. The article said that liberals who were criticizing Iran’s position of non-interference are a “joke” and should not be taken seriously. The article continued that revolutionary Iranians who think like this have “not seen all of the reality.”

The article, summing up Iran’s position, wrote that the Islamic Republic does not want a civil or ethnic war next door in Afghanistan.

An article in Jahan news also attacked “celebrities” and other social media activists for supporting Panjshir. The article wrote that Iran had already condemned the attacks on Panjshir and noted it was also ironic that many of these activists have criticized Iran’s former Quds Force commander Qasem Soleimani, who organized militias in the region, and Iran’s support for Hezbollah, yet they are actively pushing for Iran to enter another arena by supporting a militia group — one that’s likely doomed to fail.