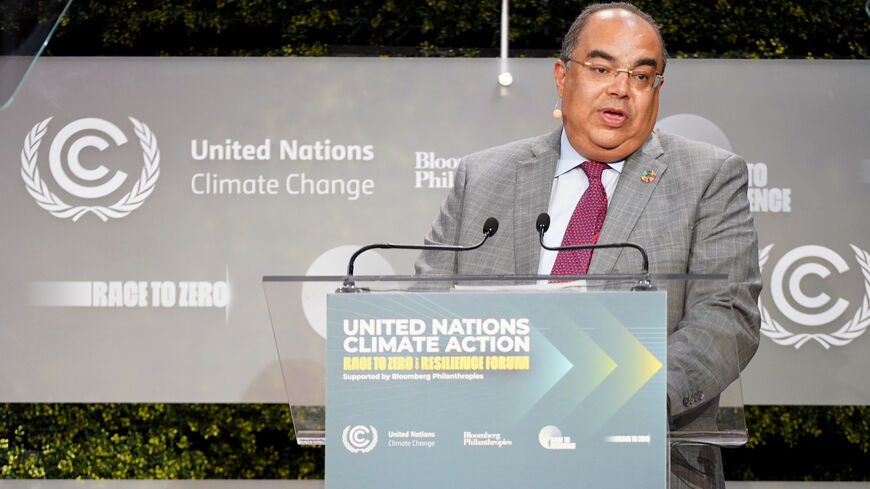 NEW YORK — Mahmoud Mohieldin, UN Climate Change High Level Champion for COP27, said that "Egypt is uniquely positioned" when it comes to its role in addressing climate change in an exclusive interview with Al-Monitor on the sidelines of the UN General Assembly meetings last week.

"It's an African country, it's a Mediterranean country, it's an Arab country with very strong ties around the world. … I think Egypt is coming with this kind of great geopolitical understanding, with the good geography that helped the country to understand the priorities and areas of tension between the different players. And it will prove to be a very strong deal broker as well.”

COP27, the Conference of the Parties to the United Nations Framework Convention on Climate Change, will be the 27th annual gathering of nearly 200 countries to discuss climate commitments, held Nov. 6-18 in Sharm El Sheikh.

He added that it’s also “a very welcome development to have a spotlight on Africa, not just for the continent's sake” but “for the world's sake as well, because it's different news coming from Africa and different from the doom and gloom that we're seeing in many parts around the world.” He went on, “Africa is bringing solutions based on partnerships between the public and private sector, and there are some practical ways of doing that, including a pipeline of investible projects, and not just from Africa.”

Mohieldin also discussed the inclusion of an initiative at COP27 stressing water’s central role in climate change adaptation, known as the Action for Water Adaptation and Resilience initiative. It will seek to generate public and private investments around water, he said, emphasizing the need to address water regulation and utilization as well as projects related to sewage treatment, recycling and desalination.

Asked about the impact of the food and energy crises as a consequence of the Ukraine war on the COP27 agenda, Mohieldin said he is a “survivor of many crises,” noting “the global financial crisis [of 2008], the emerging markets crisis and many food challenges and crises during the last 30 years.” Mohieldin was upbeat about these challenges, saying, “We survived them and the world economically managed to go beyond that.”

Commenting on the discussions at the UN General Assembly summit, he said there has been “unprecedented participation, not just by governments and politicians, but by the private sector, by think tanks, by philanthropies, by many civil society activists and NGOs."

He commented, “I am really seeing the opportunities” including the “commitments of the G7 of $600 billion to be spent on green and smart solutions" un developing countries. "So it's a kind of mixed outcomes of this crisis.”

Mohieldin took special note of the role of the private sector in helping COP27 reach its implementation goals, saying, “I see the business solutions and I see the scale, but I would say that what is required is more ability and appetite for risk taking.”

“In many developing countries, including African countries, the perceived risk could be much higher than the actual risk,” he said. “And that could be solved by better data, better investments in partnerships with the likes of the regional development banks in the continent or the work of the World Bank and others to bring some sort of risk mitigators.”

“I would say that we need scaling up on the mitigation,” Mohieldin said, noting a recent report by the Climate Policy Initiative that showed that out of $11.4 billion spent on adaptation measures, “only 3% came from the private sector.”

Observing that COP28 will be hosted by the United Arab Emirates, Mohieldin noted the close coordination between Cairo and Abu Dhabi, adding, “The UAE has as well some good ties with Africa, not just with the Arab African countries, but huge investments in the region for many years. So I'm betting on continuity and complementarity of many of the files.”