Michael 'Erik' Kurilla, the Army four-star general overseeing all American troops in the Middle East, went inside Syria's al-Hol Islamic State detainment camp Friday and spoke with residents. He says many can be sent home. 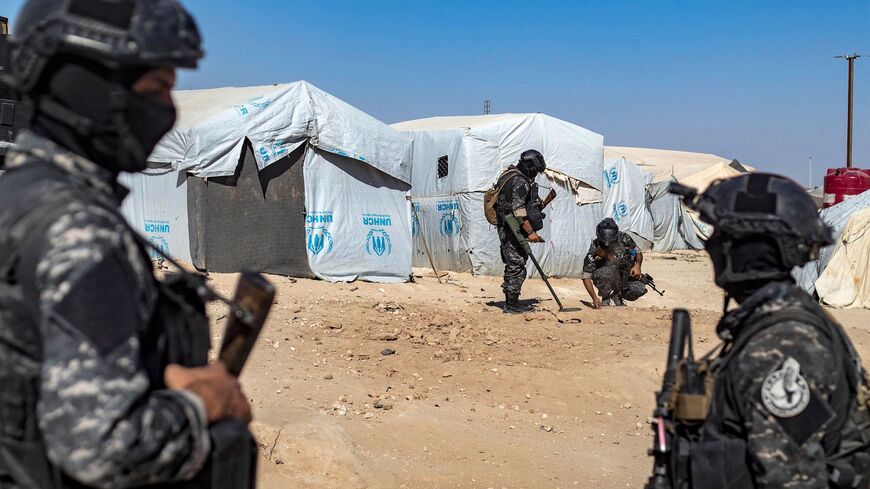 Members of the Syrian Kurdish Asayish security forces use a metal detector to sweep the ground during an inspection of tents at the Kurdish-run al-Hol camp, which holds relatives of suspected Islamic State (IS) group fighters in the northeastern Hasakeh governorate, on Aug. 28, 2022, as the Syrian Democratic Forces mount a security campaign against IS "sleeper cells" in the camp. - DELIL SOULEIMAN/AFP via Getty Images

The commander of all US military forces in the Middle East made an urgent appeal to the international community after visiting the al-Hol camp for Islamic State detainees in northeast Syria on Friday.

Describing al-Hol as a “humanitarian catastrophe” and a "flashpoint of human suffering,” US Army Gen. Michael “Erik” Kurilla urged governments around the world to repatriate their citizens from the camp “and rehabilitate them if needed.”

More than 90% of al-Hol's detainees are women and children, with 70% under the age of 12, Kurilla noted in a statement following his visit Friday. Most lack sufficient access to running water and other basic necessities to support life.

“ISIS seeks to exploit these horrific conditions. With approximately 80 births in the camp each month, this place is a literal breeding ground for the next generation of ISIS,” Kurilla said.

Why it Matters: The four-star general’s visit marked the first time ever an American official has entered into the al-Hol camp and spoken with detainees, a military official told Al-Monitor.

Kurilla previously stopped at the camp in April during his first tour of the Middle East as CENTCOM commander. US Senator Lindsey Graham (R-GA) also visited the camp in July, though that trip was not coordinated with Kurilla’s trips, the official said.

The general on Friday was accompanied by the commander of Syria’s Kurdish-led forces, Mazlum Kobane. Other US government personnel were also present, according to a well-placed source on the ground in Syria.

Al-Hol is the largest of more than a dozen makeshift facilities holding IS detainees across the country’s Kurdish-controlled northeast. Some 56,000 suspected family members of IS fighters continue to languish at the site more than three years after the US and Syrian Kurdish-led forces defeated the jihadist group on the battlefield in 2019.

The majority of those in al-Hol were sent there following the mass surrenders of IS fighters and families making a last-stand at the battle of Baghouz, Syria, in March 2019.

“Most residents of the camp reject ISIS,” Kurilla stated after meeting with detainees and camp security officials. “Many want to contribute to society. Many wish to return to their homelands, to reenter the workforce and return their children to school,” the commander said.

“There are women and children who can be returned to society. They can and want to be productive," he said, acknowledging that those he spoke to had arrived in 2017, prior to the 2019 prisoner influx.

Race against time: The CENTCOM chief’s moral appeal comes as US defense officials continue to say that IS is down, but not out.

In January, the jihadist group launched a bloody assault on the main detention facility holding captured fighters in the city of Hasakah. The resulting battle left hundreds dead, including at least 300 among the Syrian-led forces.

The group continues to recruit among the population of al-Hol and is likely planning attacks on other facilities that hold their fellow jihadists.

“ISIS views the detention facilities where its fighters are housed as the population to reconstitute its army,” the Pentagon’s top Middle East policy official Dana Stroul said during an event Washington in July.

“It looks at al-Hol and al-Raj, and the youth in those camps, as the next generation of ISIS,” Stroul said.

Without US funding and the promise of military backup, officials say the Kurdish-led guard force that runs the makeshift prisons would not be up to the task. Though some receive US training, the guards operate without US supervision. They are also inadequately paid, leaving them susceptible to bribery, the Defense Intelligence Agency reported in June.

A running series of murders and even beheadings of camp residents believed to be carried out by a network of IS enforcers known as the hisba have been discovered by security forces at al-Hol in recent years.

Violence in the camp has also driven away humanitarian workers. The Norwegian Refugee Council temporarily abandoned most of its humanitarian work in al-Hol earlier this year “following an armed raid and beatings of its staff,” the US-led coalition told a Pentagon inspector general in June. The coalition did not specify who was responsible for those incidents.

Over the past two weeks in al-Hol, the Syrian Kurdish-led forces said they’ve arrested “hundreds” of IS operatives during US-coordinated raids into the camp’s patchwork maze of tents.

US Central Command said the Kurdish-led operation had rounded up “dozens” of IS agents and disrupted a major “ISIS facilitation network, both within the camp and throughout Syria.”

Four women bearing signs of torture were also discovered chained in tunnels in the camp earlier this week, CENTCOM said in a statement. At least one member of the local Syrian security force was killed in a firefight with IS in al-Hol Thursday.

The latest clearing operation follows arrests of some 130 suspected IS members in al-Hol between May and June of this year, the US-led coalition reported in June.

Trickle of repatriations: Kurilla on Friday praised Baghdad’s recent effort to repatriate its citizens, noting that roughly half of the camp’s detainees are from Iraq.

The Iraqi government has brought back nearly 2,500 citizens from the camp since last year, including 683 people (among them 203 children) in the month of June, according to the latest inspector general report. Detainees have also been returned to Kosovo, Russia and other European countries in recent months.

“There’s a need to accelerate this progress,” Kurilla said in the statement. “Should Iraq repatriate, rehabilitate and reintegrate its citizens, the problem would immediately become much more manageable.”

Roughly a third of camp residents are believed to be from Syria, posing an even greater problem for the international repatriation effort. International law forbids returning prisoners to the custody of governments likely to violate their basic human rights.

What’s next: In the long term, US officials see repatriation as the only viable solution to the IS detainee problem. The State Department is leading that effort, but it is unlikely to be resolved within the next two or three years.

For that reason, Pentagon and State Department officials have been working with lawmakers in Congress to increase funding for construction of new “purpose-built” facilities to hold IS detainees in more secure and humane settings.

The US-led coalition cycled in a new commander, Army Maj. Gen. Matthew McFarlane, at a ceremony in Baghdad on Thursday.

Know more: Pentagon officials are warning that Turkey’s stated plans to invade northeast Syria and attack the Kurdish-led forces will almost certainly spring IS jihadists from their prisons.