The number of Jewish community members of Israeli and other nationalities in the United Arab Emirates has been increasing annually since the signing of the 2020 Abraham Accords, establishing commercial and medical institutions and synagogues. 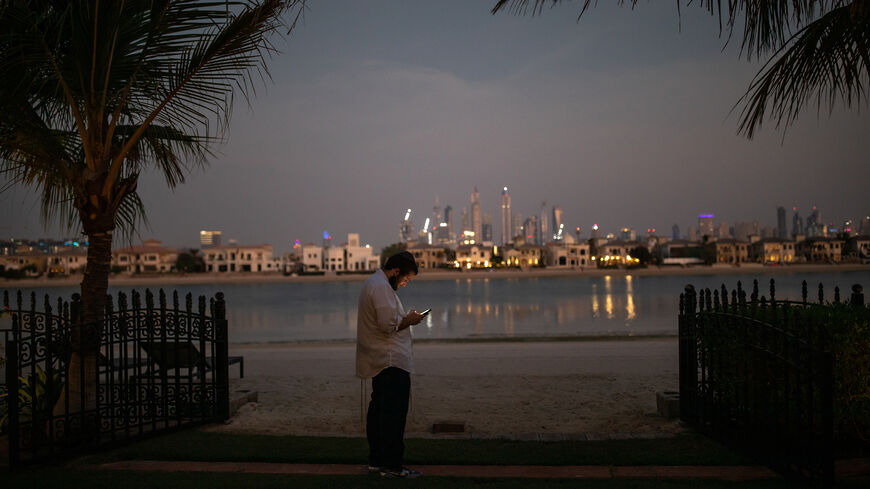 Rabbi Eli, from CTeen International, an orthodox Jewish teen network, checks his phone during the first Sukkot Hop ever to be held in Dubai, United Arab Emirates, Sept. 23, 2021. -

Two years after the signing of the Abraham Accords between the United Arab Emirates (UAE) and Israel, the Jewish community in general and the Israeli community, in particular, is “flourishing” in the Gulf country, the UAE’s first Rabbi Levi Duchman told The Jerusalem Post.

According to the newspaper's Sept. 18 report on the lives of Jews in the UAE, Jews have become more vocal in expressing their beliefs and increasingly integrated into the Arab community and other religious communities within the UAE, whose population of both nationals and expats stood at nearly 9.3 million people in 2020, according to the UAE government website.

The government site stated that there are more than 200 nationalities residing and working in the UAE, with expats and residents outnumbering citizens.

The Indian community, according to the government data, is one of the largest expatriate communities residing in the UAE, followed by the Pakistanis, Bangladeshis and other Asian, European and African nationalities. There is also a diversity of monotheistic and nontheistic religions in the country.

In the article, Duchman said that Jews had been present in Abu Dhabi and Dubai for years but were living in secret. He recounted that back in 2014, he led a Passover seder for Jewish students at New York University’s Abu Dhabi campus.

Lebanese-American Elie Abadie, senior rabbi of the Jewish Council of the Emirates (JCE) and an American of Lebanese origin who also runs a small synagogue in his villa in the Jumeirah area of ​​Dubai, shares the same opinion as Duchman.

According to Abadie, about 700 Jews officially reside in the UAE, including Israelis, but no official figures exist for the exact number of Israelis, who are mainly based in Dubai and the capital, Abu Dhabi.

He noted that there are estimates that Israelis in the UAE currently number 2,000.

“We now have several commercial, tourist, and religious institutions in the country. There is AVIV clinic in the prestigious Jumeirah Lakes Towers area in Dubai,” he said. “The clinic deals with bone, muscle, and brain diseases, and treats post-coronavirus symptoms through oxygen therapy technology. It is frequented by citizens and residents of different nationalities, not just Israelis or Jews.”

Jewish educational institutions and grocery shops selling kosher food, which is the equivalent of halal food in Islam, also flourished in no time.

In 2021, Mini Miracles Kosher Multilingual Nursery and Preschool-Dubai was inaugurated in a private villa in Dubai.

Also, the Jewish Community Center of UAE opened its doors in 2021, in addition to the Emirates Agency for Kosher Certification.

“There are about five kosher shops in the UAE, most of which are located in specific hotels for Jews to buy their own food. There are also some kosher items in some of the restaurants in several malls in Dubai,” Abadie said.

There are many synagogues in the country, mostly located in private villas.

“In Dubai, for instance, there are about six temples, including one in my own villa in Jumeirah and another in a different villa. The [Jewish] community often rents rooms or small halls in a few hotels in Dubai to hold prayers,” Abadie explained.

“These temples are located in areas inhabited by Jews such as Jumeirah, Al Wasl [in western Dubai] and Dubai Festival City [in eastern Dubai]. There is another temple in the Dubai Creek area [a heritage area located in the northwest of Dubai], as well as our own restaurant,” he added.

To date, there is no official temple for Jews in the UAE, but there are currently procedures for building a synagogue in a separate building. The UAE government allows the issuance of licenses to rent places in hotels to hold prayers, and work is currently underway to build the largest religious gathering in Abu Dhabi under the name of the Abrahamic Family House, which will include a synagogue, a church and a mosque.

Work on the Abrahamic Family House has been underway for 2½ years and the project is expected to launch next year.

Abadie pointed out that he and other members of his sect have never experienced negative or strange treatment by UAE citizens or residents.

The National newspaper published a report Sept. 15 about some Israeli families moving to Dubai to invest in various fields such as real estate and jewelry trading.

The article includes an interview with Adi Zamir, an Israeli man who runs a diamond and jewelry business in Ramat Gan city near Tel Aviv, who told the paper that most of his clients are Indian, and that the "majority of the diamond business is in India so I have to be close to India. My clients have no problem coming to Dubai because India is only a three-hour flight.”