In his address to the UN General Assembly, Prime Minister Yair Lapid also addressed Israeli Arab citizens, boasting that his coalition included an Arab party and that his government included Arab ministers. 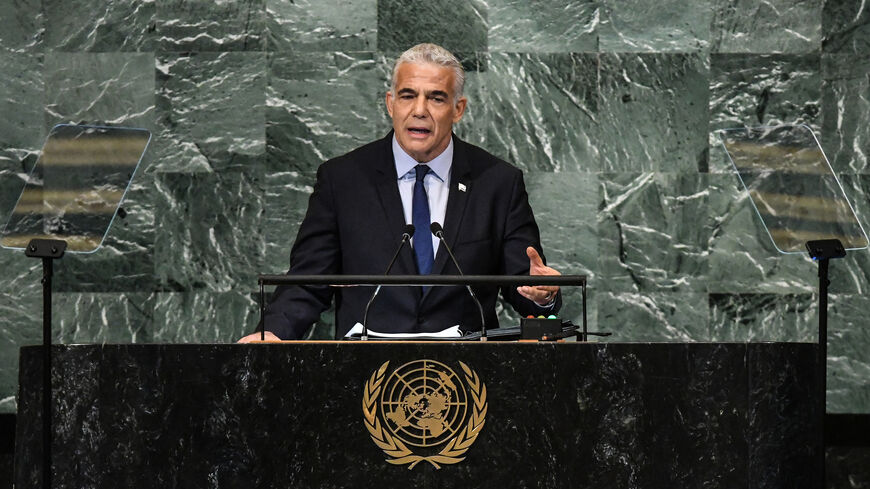 The Sept. 22 speech of Prime Minister Yair Lapid to the UN General Assembly made headlines mostly because of the support he expressed vis-a-vis the two-state solution in the conflict with the Palestinians. The speech was targeting Israeli voters in general, ahead of the Nov. 1 elections, and Israeli Arab voters in particular.

Relating to the diversity of Israel’s population, Lapid said, “In the government which I lead, there are Arab ministers. There is an Arab party as a member of our coalition. We have Arab judges in our Supreme Court. Arab doctors saving lives in our hospitals. Israeli Arabs are not our enemies, they are our partners in life.”

The remarks by Lapid came on the backdrop of surveys predicting an especially low turnout of Israeli Arab voters. This situation greatly worries both the Arab parties and the “anyone-but-Netanyahu” bloc, headed by Lapid. He understands that without a normal voter turnout, if not an especially high turnout, opposition leader Benjamin Netanyahu’s road to the prime minister’s office is paved.

Thus, we must ask, what did Lapid seek to achieve here? Did he think that by mentioning the Palestinian issue alongside the two-state solution and a statement about Israeli Arab citizens he could fire up the Israeli Arab public and inspire folks to stream to the polls?

No less important, if this is really what he thinks about Israel and its diversity, why hasn’t he included an Arab candidate in a realistic spot on the Yesh Atid party list since the 2013 election? Israeli Arabs wonder why Lapid hasn’t bothered to visit an Arab town so far during his election campaign. They also wonder why he didn’t address them directly during the election campaign instead of doing so from New York, and in English.

Recent surveys show that the issue of a Palestinian state is not at the top of the priority list of Arabs in Israel. There are quite a few issues that are more important to them to fix first, such as violence and crime, the housing crisis, education, improving the economic situation and other civic issues that for them supersede any kind of diplomatic agreement.

So, while the center-left camp celebrated Lapid’s speech at the UN, it seems that the Arab public received the speech with some apathy, or a lack of excitement.

The chairman of Hadash-Taal, Knesset member Ayman Odeh, tweeted after the speech, “Prime Minister Yair Lapid’s speech returned the Palestinian issue to the public discourse in the election and this is important in itself. But it seems that diplomatic statements are one thing and action on the ground is another thing. Netanyahu had also spoken on two states. The leaders of the country fell in love with the peace process, not with peace itself, in managing the conflict, not ending it.”

The chairman of Balad, Knesset member Sami Abou Shahadeh, wrote a long Facebook post in Arabic and English, wondering whether saying "two-state solution” is supposed to be enough, and warning against falling into a honey trap like the UN speech.

Abou Shahadeh also addressed the situation of Israeli Arabs. “We know you insist it's a democracy, so will you unequivocally declare Israel a state of all its citizens without discrimination on religion or ethnicity? How about ensuring full equality? Will you recognize the villages inhabited by almost 100,000 citizens in the Negev who are not recognized by Israel and deprived of their fundamental rights? Will you stop the plans to 'lullify' Naqb and Galilee? Will you take any measures to stop the violence in the Arab regions? Will your law enforcement agencies be held accountable for failing to protect all its citizens without discrimination on their origin or religion?”

And how has the speech impacted those who don’t intend to vote in the election?

Tamer Kiwan, resident of Majd al-Krum, who does not intend to vote, told Al-Monitor, “Lapid’s speech at the UN won’t impact my decision because you can’t buy the Arab vote with 2½ sentences abroad. Instead of speaking at the UN and talking to the Arab public from there, it would be better if he visited an Arab town and make a direct connection with the public. I voted in the past and haven’t seen that anything changed or that my vote had any kind of impact.”

Attorney Amjad Shoufany, from Ilabun, also wasn’t moved by the speech. He told Al-Monitor, “I will not vote in the election this time because no one in the bloc called 'center-left' is willing to really cooperate with representatives of the Arab public. On the contrary. They reject at every opportunity any possibility for such cooperation. Even when the Arab Joint List reached 15 mandates it wasn’t seen as a bigger partner but as a bigger threat, and therefore there’s no point in voting and playing a game that you already lost before it started.”

Reacting to Lapid’s speech, Defense Minister Benny Gantz said that he aspires to form after the November elections a broad national unity government. Gantz said he does not consider the Arab Joint List potential partners, since he does not want to “lean on the political map extremes.” As for Palestinian President Mahmoud Abbas, Gantz said he is definitively a potential partner, since he supported pragmatically the government and since he recognized the Jewish democratic State of Israel.