The executions were reduced to jail terms in a controversial case that had drawn a furious public backlash. 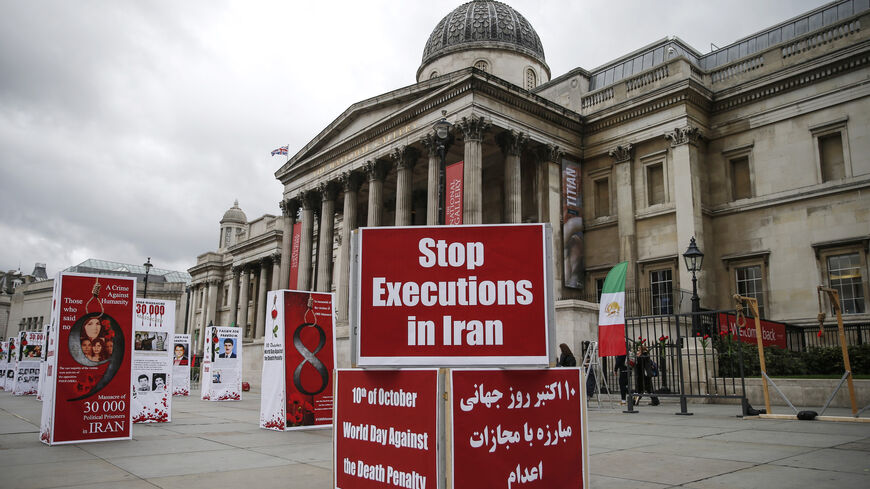 An exhibition calling for an end to executions in Iran on Trafalgar Square on October 10, 2020, in London, England. - Hollie Adams/Getty Images

A court in the Iranian capital handed five-year jail sentences to three anti-government protesters, officially reversing their death penalties issued at a trial in 2020.

The three, Amir-Hossein Moradi, Saeed Tamjidi and Mohammad Rajabi, were detained during the country's November 2019 unrest that was triggered by an unpopular fuel price hike plan.

Babak Paknia, the lawyer representing them, announced the verdict on Twitter, adding that the jail sentences were also open to appeal. "The time they have already served will effectively make them qualified for conditional release," he further noted, referring to parole on compassionate grounds.

Following their arrest, the three defendants were put on trial as "riot leaders acting against the Islamic Republic" and were given capital punishment by notorious hard-line judge Abol-Qasem Salavati, who has been sanctioned by the United States and the European Union over alleged human rights violations.

As the proceedings concluded in February 2020, wide-reaching campaigns called for a halt to the executions. "No to the death penalty" was among multiple fast-trending hashtags on Persian Twitter, where alarmed Iranians expressed anger and frustration.

Despite being upheld, the rulings were once again reviewed by Iran's Supreme Court, which suspended them and ordered a retrial.

Rights organizations have referred to the November 2019 protests as the largest ever unrest in post-revolution Iran, in which the security apparatus came down on the demonstrators with its harshest line. Amnesty International has documented at least 304 deaths, a Reuters investigation has counted 1,500, and the official toll announced by Iran's Interior Ministry stands at above 220.

Iran is one of the world's leading executioners, sitting next only to China and competing with Egypt and Saudi Arabia. Citing Sharia law and its own constitution, the Islamic Republic has repeatedly shrugged off intranational calls to repeal the practice.

In the latest on Monday, the Iranian judiciary confirmed death sentences against two activists known for their advocacy of the rights of LGBTQ+ communities. Prosecutors have accused the two of "promoting homosexuality" and "trafficking women and girls" into neighboring Iraq. Same-sex relationships are criminal offenses under the Islamic Republic's penal system. The pair have since Sunday received fast-growing social media solidarity meant to save them from the gallows.