The Iran deal’s negotiators are in town for the United Nations summit, but expectations are low that the diplomatic flurry will produce a breakthrough. 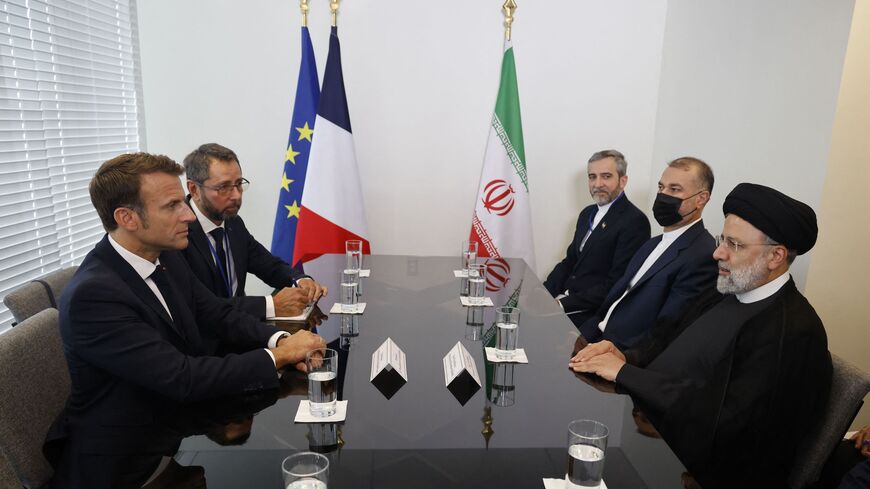 NEW YORK — Not since Vienna served as the venue for negotiations early last month have the key players to the Iranian nuclear agreement been in the same city. This week, many of them will be in New York, where any signs of contact will be closely watched for hints of progress in the stalled talks.

A day after his arrival to attend the UN General Assembly, Iranian President Ebrahim Raisi met Tuesday with French President Emmanuel Macron in what marked Raisi's first face-to-face meeting with the leader of a major Western country since his election in June 2021.

Efforts to revive the tattered nuclear pact have reached a stalemate, and sources familiar with the negotiations between Iran and world powers were downbeat that diplomatic contacts on the sidelines of the UN summit would yield a breakthrough on the agreement, known as the Joint Comprehensive Plan of Action (JCPOA).

Prior to the Iranian delegation's arrival in New York, Iranian Foreign Ministry spokesman Nasser Kanaani told reporters Monday that he wouldn’t “rule out the possibility” of Tehran's representatives meeting with the non-US signatories to the nuclear deal.

The Iranian delegation has taken up residence at the Millennium Hotel, less than a mile away from the Americans’ home base for the week, the Lotte New York Palace.

But US Special Envoy for Iran Robert Malley is not expected to have any interactions with Iranian officials during his stay in New York. Throughout nearly a year and a half of on-and-off negotiations, the Iranian side has refused to talk directly with US officials and says that will remain the case this week.

On Monday, Malley met with Iraqi Foreign Minister Fuad Hussein and Qatari Foreign Minister Mohammed bin Abdulrahman Al Thani and will meet with counterparts of other partners and allies throughout the week, including from France, Germany and the United Kingdom, a State Department spokesperson told Al-Monitor on Tuesday.

“The United States will continue to pursue JCPOA talks as long as we believe doing so is in the interest of US national security, but the administration, along with our allies, is preparing equally for scenarios with and without a mutual return to full implementation of the JCPOA,” the spokesperson added.

For more than a month, the United States and Iran have been exchanging feedback on what the European Union described as a “final text” to revive the JCPOA. In a significant setback, Iran proposed changes in its response late last month that the Biden administration called a step “backward.”

Among the remaining sticking points is Tehran’s demand that the IAEA close its probe into uranium traces discovered at three of its undeclared nuclear sites. Iran is also seeking guarantees that the next administration will not abandon the nuclear pact, a point Raisi made clear in a “60 Minutes” interview broadcast Sunday night.

“Neither the US nor Iran are in the mood to show flexibility right now,” said the International Crisis Group’s Ali Vaez, who closely follows the negotiations.

“The former doesn't want a political firestorm in Congress ahead of midterms, while the latter doesn't want to signal that unrest in Iran has compelled it to back down,” he said.

Raisi's planned address to the UN General Assembly on Wednesday comes against the backdrop of violent protests over the death of Mahsa Amini, a 22-year-old Kurdish woman beaten by morality police enforcing the country’s strict hijab rules in Tehran.