Despite what was reported as complicated, last-minute conditions set by the Iranian side, informal statements by Russian and European negotiators indicated that the talks in Vienna were reaching a conclusion. 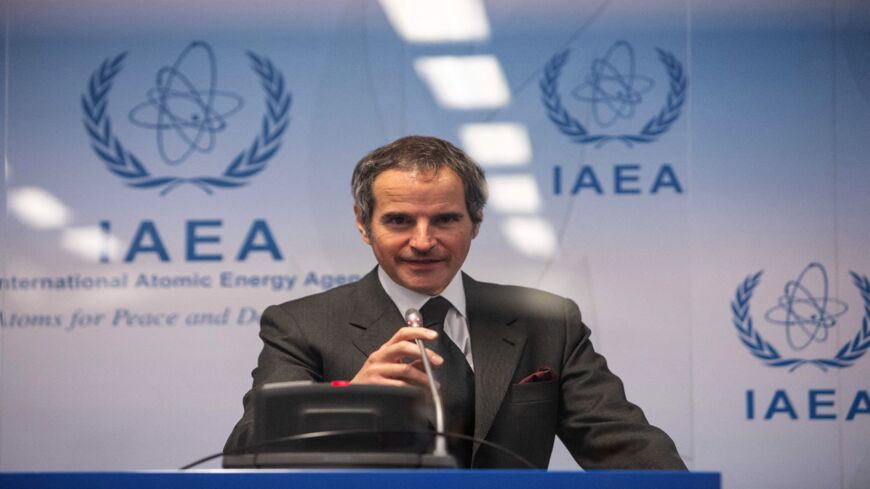 Rafael Grossi, director-general of the International Atomic Energy Agency, speaks during a press conference at the agency's headquarters in Vienna, Austria, on May 24, 2021. - ALEX HALADA/AFP via Getty Images)

The International Atomic Energy Organization (IAEA) announced that its director-general, Rafael Grossi, was scheduled to sit down with Iranian officials in Tehran on Saturday.

The visit follows the Islamic Republic's demands for a closure of cases dealing with its Possible Military Dimensions, as part of its new conditions in Vienna negotiations over restoring the 2015 nuclear deal.

The IAEA chief is set to meet with Iran's atomic chief and the country's foreign minister to discuss resolving "safeguards issues." One lingering, contentious question between the Islamic Republic and the nuclear watchdog revolves around nuclear material, which the agency says Iran has failed to report. A settlement of those differences is seen as a key step toward bridging the final gaps between Tehran and the Western parties in Vienna.

The path of the negotiations over the past month has been bumpy and open to contradicting sets of speculation ranging from utter collapse to absolute success.

Nevertheless, diplomats leading the talks sent signals on Thursday that the talks were concluding.

"Thank you for your tireless work over the last 11 months," tweeted French negotiator Philippe Errera with a picture of his team members. Errera said he was doing this in line with his German and British counterparts. In a similar post, UK representative Stephanie Al-Qaq expressed gratitude to "colleagues in Vienna" with a bouquet of flowers.

And yet more openly, Russia's envoy, Mikhail Ulyanov, heralded an end to "a long and grueling marathon" in Vienna. "It is almost over," he declared on his Twitter account.

Ulyanov's statement came only hours after reports that he was leaving the venue of the talks to focus on assignments dealing with his country's ongoing war on Ukraine. Iran's IRNA news agency, however, quoted an unnamed source close to the Russian delegation as saying that the senior diplomat had only briefly left to attend an IAEA meeting on Ukrainian nuclear facilities — which are threatened by Russian attacks — and is set to rejoin the Iran talks.

Iranian pundits, for their parts, shared positive backchannel reports from the Austrian capital. "I have received definitive news that within the next 72 hours, the nuclear deal will be signed in Vienna," wrote oil and gas journalist Reza Zandi, as he spoke of Iran's imminent return to global markets "under golden circumstances."

While details of a potential deal remain unknown, the Islamic Republic is reported to have also been fighting on a parallel front against non-nuclear sanctions, most notably for the removal of the Islamic Revolutionary Guard Corps from the US list of terrorist organizations.

Western diplomats have in recent weeks repeatedly warned that the window could soon be closed if Iran refuses to modify its position. A similar message has now come from Tehran amid all the growing possibilities for an agreement within reach.

The secretary of Iran's Supreme National Security Council, Ali Shamkhani, advised US officials to "make use of the chance provided by diplomacy" now or grapple with "the feeling of defeat" later.