Demonstrations were organized against the Turkey-backed Free Syrian Army in the city of al-Bab, during which protesters demanded that the factions return their houses and farms that had been seized after the FSA took control of the city in 2017. 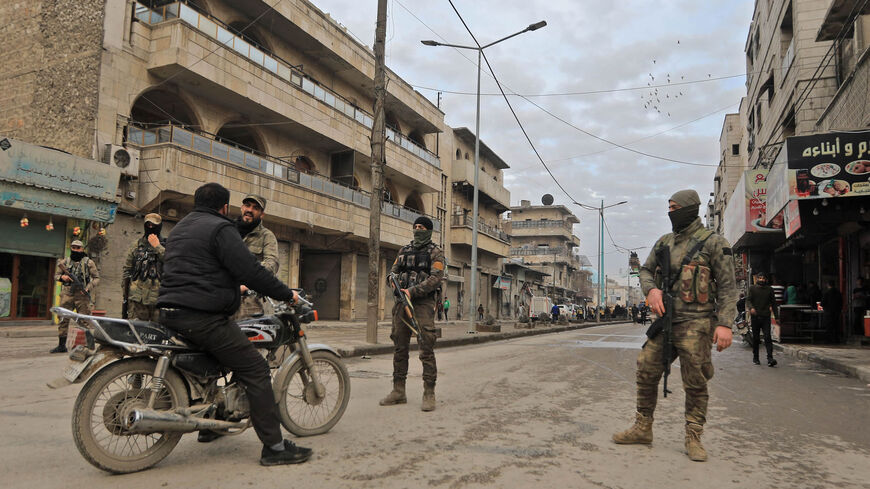 ALEPPO, Syria — The city of al-Bab, which is under the control of the Turkey-backed Free Syrian Army (FSA) in the northeastern Aleppo countryside, witnessed Sept. 23 popular protests demanding that the FSA factions hand them back their property, including their houses, farms and shops, which the factions had seized years ago, when the FSA and the Turkish army took control of the city after expelling the Islamic State (IS) in 2017 as part of Operation Euphrates Shield.

The protesters raised the Syrian revolution flag and photos of a number of FSA leaders whom they accuse of usurping their properties.

One day before the protests, the owners of the usurped properties in al-Bab issued a statement condemning the FSA for failing to return their properties. “We have been waiting for more than five years for you to return to us our usurped homes and properties, but you have not met your promises,” the statement read.

It continued, “If you [FSA leaders] are angry at some media outlets that describe you as militias, why then do you keep in your ranks the perpetrators of heinous acts?"

On Sept. 16, al-Bab residents had organized another protest demanding that the FSA factions give them their properties back. They accused Fadi al-Diri, a military commander in the FSA’s Sultan Malik Shah Brigade, of having confiscated the largest number of real estate, residential houses and farms in the city of al-Bab.

Since taking control of the area in 2017, FSA factions have divided among themselves usurped farms and houses, which are owned by the residents of al-Bab. These factions claim that the owners of these properties are close to IS or that one of their relatives was an IS member when the organization was in control of the city between 2014 and 2017.

Al-Monitor spoke to a number of owners of usurped houses and farms, including Yousef Qablawi, owner of a six-apartment building, which the Sultan Malik Shah Brigade seized in 2017.

“After the FSA entered the city of al-Bab and expelled IS from it in 2017, we were surprised by the Sultan Malik Shah Brigade led by Fadi al-Diri seizing our residential building,” Qablawi told Al-Monitor.

He said that his family was displaced from al-Bab during IS’ control of the city. After the organization was expelled in 2017, he returned to al-Bab to reclaim his home.

“But after nearly five years, we have yet to return to our home. This faction has been in control of our building since then [2017], and families of its members live in our homes,” he noted.

Qablawi added, “Over the past years, I tried more than once to reclaim the building, but to no avail. I submitted a complaint to the FSA’s military police in the city of al-Bab, and they could not help me. Members of the Sultan Malik Shah Brigade threatened to kill me if I claim the building and my apartments in which they have been residing.”

Commenting on the accusation of being affiliated or close to IS when it held the city, Qablawi said, “These charges are false and are not based on any evidence or proof. My family and I have never been in IS ranks or loyal to that organization. These accusations are intended to silence us and to prevent us from claiming our rights and properties.”

He explained, “My situation is similar to that of many owners whose properties have been confiscated by the FSA and who were neither affiliated nor involved with IS. Most of us returned to the city after it was liberated from IS and were surprised that FSA fighters occupied them and they refused to leave them.”

Qablawi noted, “I know a number of people whose property was usurped in al-Bab, and they took part in the protests recently, including Anas Shawaf whose farm was seized and Sheikh Mahmoud Masoud whose house was usurped. I know a lot of owners whose farms and buildings in the city have been usurped by the Sultan Malik Shah Brigade, including Mahmoud Younis, Amer Sukkar, Muhammad Bashir Zuaiter, Muhammad Qadirani and others.”

He continued, “There are other FSA factions that are also involved in the confiscation of properties, homes, farms and shops in al-Bab. This is not limited to the Sultan Malik Shah Brigade.”

Speaking to Al-Monitor on condition of anonymity during the Sept. 23 protest in al-Bab, one of the owners of a farm that was seized by the Sultan Malik Shah Brigade in 2017, said, “Two years ago, I filed a complaint before the civil court in al-Bab and the judge issued a ruling ordering the brigade to leave the farm and return it to me. Unfortunately, the court’s decision has not been implemented. The problem is that the judiciary has no power or influence in the liberated area where the factions are stronger than any security or judicial institution.”

He added, “At one time, I asked a judge in al-Bab to pressure the Sultan Malik Shah Brigade’s leaders to hand over my house and implement the court’s decision to evacuate. The judge told me, ‘Do you want them to kill me?’”

An FSA officer in al-Bab told Al-Monitor on condition of anonymity, “This dilemma has been going on for years. There are many real estate properties that have been confiscated by the FSA factions, and judicial decisions to return them to their owners were issued. But a number of the factions did not comply, while others did and returned the homes and properties to their owners.”

The officer said, “The problem of usurping the homes and farms in the FSA-held areas is not limited to al-Bab. It also exists in Jarablus, Azaz and other areas, and the confiscation is carried out based on the accusation that the owners are members of IS, or that they are owned by relatives of former IS leaders and members.”

The officer added, “A number of protesters’ representatives recently met with FSA leaders in al-Bab, and were promised that their property would be returned.”

Al-Monitor spoke to owners of usurped properties during the Sept. 23 protests, and they insisted that they will continue demonstrating every Friday in a bid to pressure the FSA to return their properties.