Iraq’s Sunni and Kurdish forces are closely watching developments between the Sadrist movement and the Coordination Framework, so as to take a political position on whether to dissolve parliament and hold early elections. 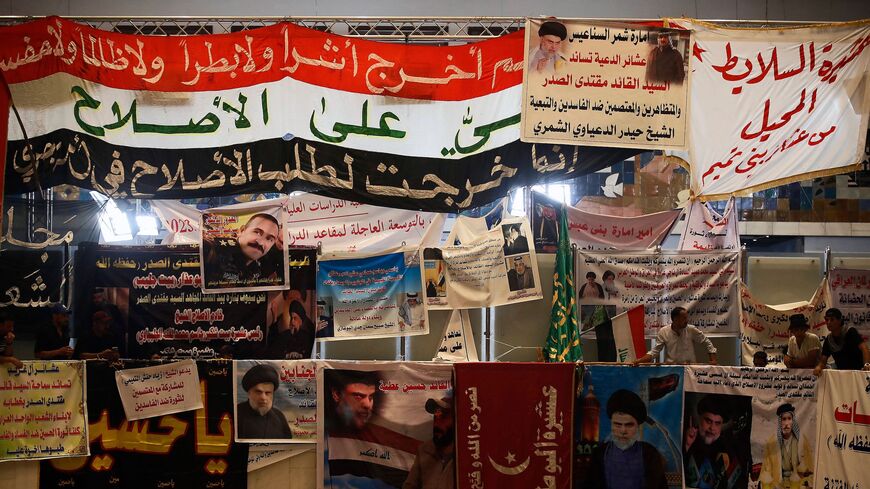 No political party representatives attending the Aug. 17 national meeting at Cabinet headquarters in Baghdad — which was held at the invitation of Prime Minister Mustafa al-Kadhimi — objected to holding early elections in the coming months.

According to the meeting’s final statement, “The participants indicated that re-holding early elections is not an exception in the history of democracies when political crises hit a dead end. The national political forces will abide by the constitutional path for the elections.”

Iraq's latest political crisis started after the October 2021 election results were announced and escalated on June 12 after Shiite cleric Muqtada al-Sadr’s Sadrist bloc, which has 73 seats, resigned from parliament. Sadr made the call for early elections on Aug. 3.

Although other Shiite parties agreed to hold early elections, their disagreement with Sadr is focused on its mechanism for holding them. While the Sadrist movement demanded the dissolution of parliament without holding a new parliamentary session, the Coordination Framework — which consists of the Iran-aligned parties, some of which lost in the elections — would rather vote on this dissolution in parliament.

Sadr is against holding a parliament session in the absence of his bloc, which is why he pushed his supporters to hold a sit-in in the parliament building, as he knows very well that holding a session will result in his rivals in the Coordination Framework amending the electoral law, which Sadr prefers to keep as is.

Article 64, Paragraph 1 of the Iraqi Constitution stipulates, “The Council of Representatives may be dissolved by an absolute majority of the number of its members, or upon the request of one-third of its members by the Prime Minister with the consent of the President of the Republic. The Council shall not be dissolved during the period in which the Prime Minister is being questioned.”

The Kurdistan Democratic Party (KDP), led by Massoud Barzani — an ally of Sadr — does not mind a dissolution of parliament, although some KDP officials said before Sadr’s demand that they do not agree with the call for dissolution and pointed to the difficulty in doing so.

KDP parliament member Ekhlas al-Dulaimi told the press on Aug. 15, “We are with the dissolution of parliament if this solution will resolve the problem, which means that in case we hit a deadlock, we could opt for this solution in accordance with the constitutional and legal frameworks, and in light of guarantees that this tragedy will not be repeated.”

PUK parliament member Suzan Mansour said on Aug. 11, “The dissolution of parliament does not help anything, particularly since the elections were held less than a year ago. Also, holding them will cost more than 400 billion Iraqi dinars, or the equivalent to $275 million.”

The PUK may be negatively affected by new election results. Its main popular base is in Sulaimaniyah where the parties are multiple — especially the opposition ones — and there are fears that it may lose some of the seats it secured in the elections in light of the developments in the past few months and its internal differences.

The Sunnis do not seem to have an opinion that differs from that of Sadr. This opinion was expressed by Iraq's parliament speaker Mohammed al-Halbusi, the most prominent Sunni leader at present. He affirmed on Aug. 5 his support for Sadr’s demand to dissolve parliament and hold early elections. Halbusi, Sadr and Barzani represent the tripartite alliance that strived in vain to form a Cabinet before Sadr withdrew from parliament.

A political source that attended the meeting told Al-Monitor, “It is imperative to hold early elections. This has become a reality. But the current discussions and understandings are focused on the mechanism for holding them.”

Most of Iraq’s political parties ostensibly agreed to hold early elections, but they continue to have different views regarding the mechanism for holding them and the Cabinet that will be tasked with organizing them. Will it be the Kadhimi Cabinet or a new one? Regardless, Iraq has a long way to go before a Cabinet is formed, and this may even deepen the crisis.

Holding early elections may not be a solution if the electoral law in force — which served Sadr well — remains as is. This is the opinion of the Iran-aligned parties that suffered major losses in the elections, prompting them to unite their ranks under the Coordination Framework to confront Sadr.

The discussions will also be centered on the Iraqi Independent High Electoral Commission and its board members who are tasked with managing the electoral process. Several accusations were leveled against this commission following the elections, and Iraq may have a long way to go before selecting a new one.

The Kurds and Sunnis probably do not have a problem with holding early elections, especially Barzani and Halbusi, as their popular bases have almost remained unchanged in the absence of competitors. As for the Shiite parties, new groups raising the slogan of the October 2019 protest movement have emerged in predominantly Shiite areas.