The Biden administration sees Zawahiri's presence in Kabul as "a clear violation" of the 2020 Doha agreement with the Taliban, a senior US official said. 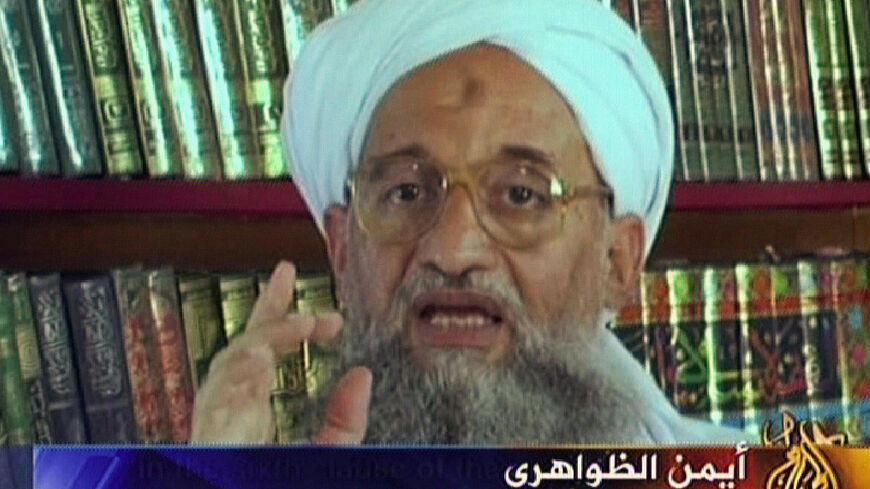 A grab taken from a video produced by al-Qaeda-linked media group as-Sahab and broadcast by the Qatar-based satellite channel Al-Jazeera 11 September 2006 shows the number two in al-Qaeda, Ayman al-Zawahiri, speaking in an undisclosed date and place. - AFP via Getty Images

The United States killed the top leader of Al-Qaeda and longtime lieutenant to Osama bin Laden, Ayman al-Zawahiri, in a drone strike in Afghanistan early on Sunday morning.

US President Joe Biden said in a speech from the White House on Monday night that the strike was meticulously planned and resulted in no civilian casualties. A senior US official speaking on the condition of anonymity told reporters that members of Zawahiri's family were present in the house at the time of the strike, but expressed confidence that neither they nor any other individuals were harmed.

Zawahiri was killed by two Hellfire missiles fired from a US drone while on the balcony of his safe house in downtown Kabul at 6:18 a.m. Sunday, local time, the senior administration official told reporters. The US military has not claimed the targeted killing, which suggests it was likely carried out by the CIA.

Born in Giza, Egypt in 1951, Zawahiri took the reins of Al-Qaeda after its long-time leader bin Laden was killed in a US Navy SEAL raid in Abottabad, Pakistan in 2011. A physician by training and veteran leader of the now-defunct Egyptian Islamic Jihad group, Zawahiri had joined bin Laden's organization by 1998 and served as his deputy through the September 11th attacks on the US.

He is also believed to have helped plan the bombings of the US embassies in Kenya and Tanzania in 1998, and the attack on the USS Cole in Yemen in 2000. President Biden on Monday said Zawahiri “carved a trail of murder and violence against American citizens, American service members, American diplomats and American interests” throughout his decades long jihadist career. “Now, justice has been delivered. And this terrorist leader is no more,” the US president said.

The Taliban on Monday condemned the strike, which occurred in the Sharpur district of the capital, and accused the US of violating the 2020 Doha agreement. Taliban officials have claimed the deal bars US strikes within Afghanistan without permission, though Washington follows a different interpretation.

The agreement entails a Taliban guarantee that Afghan soil will not be used by Al-Qaeda, the Islamic State and other international terrorist groups to threaten the US, its allies or other countries. The Biden administration views Zawahiri’s recent presence in Kabul as “a clear violation” of the Doha agreement, the senior US official said today.

“Going forward with the Taliban, we will continue to hold them accountable for their actions,” the official said, adding that American officials plan to directly inform Taliban leadership that such strikes will continue if deemed necessary under the terms of the Doha agreement.

Senior members of the Taliban’s Haqqani faction, which controls Afghanistan's interior ministry, knew Zawahiri was at the house and sought to remove evidence of his presence after he was killed, including by cordoning off the site and skirting his family members off to another location, the senior US official told reporters.

“For several years, the US government has been aware of a network that we assessed has supported Zawahiri,” the senior official said. Earlier this year, US intelligence picked up that Zawahiri’s wife, daughter and grandchildren had moved into a house in downtown Kabul. The jihadist leader soon followed.

He was observed "on multiple occasions for sustained periods of time" on the balcony of the house as US intelligence slowly built the case for his presence, according to the official, who added that Zawahiri is not believed to have emerged from the building after arriving there earlier this year.

Biden received several updates from top advisers and cabinet members over the subsequent months. In those meetings, the president expressed concern over the possibility of civilian casualties, inquiring about potentially overlooked details of the target environment, including lighting and weather, according to the official.

As officials combed through the intelligence, the president's advisers discussed at length ways to kill the Al-Qaeda chief without threatening civilians in the building or in the surrounding neighborhood, seeking to avoid civilian deaths that marred the US withdrawal from Afghanistan and prior raids against senior jihadist leaders.

US officials even investigated the building's construction so as to prevent potentially deadly structural damage, like that which occurred during a Delta Force raid that led to the death of Islamic State leader Hajji Abdullah in northwest Syria in February. During a briefing on a potential operation on July 1, President Biden personally examined a model of the house in which Zawahiri was staying.

On July 25, Biden finally gave the green-light for a drone strike to kill Zawahiri after once more inquiring about measures that could be taken to prevent civilian harm, the official said, adding that no US troops were involved on the ground.

“Zawahiri’s death deals a significant blow to Al-Qaeda and will degrade the group’s ability to operate, including against the US homeland,” the official said.

"I applaud the US military and intelligence community for a successful operation in Afghanistan to eliminate Al-Qaeda leader Ayman al-Zawahiri. Zawahiri was an evil terrorist and co-conspirator of the September 11, 2001 terrorist attacks with the blood of thousands of Americans on his hands," US Senator Marco Rubio, vice chair of the Senate select intelligence committee, said in a press release on Monday.

Mick Mulroy, a former CIA paramilitary officer who later served as the Pentagon's Middle East policy director, called the strike "a major success of US counterterrorism efforts" and "a result of countless hours of intelligence collection over many years."

"He likely believed we would never be able to track him down," said Mick Mulroy, now an ABC News contributor. "He was wrong."

"The message for Al-Qaeda and all its affiliates should be that the US will never relent in its mission to hold those accountable who would seek to harm the United States and its people," Mulroy said.

This story was updated on Monday evening to include additional details of the US strike.