Several Gulf states are experimenting with blue ammonia and carbon capture technology, which has energy-related potential but a mixed impact on the environment. 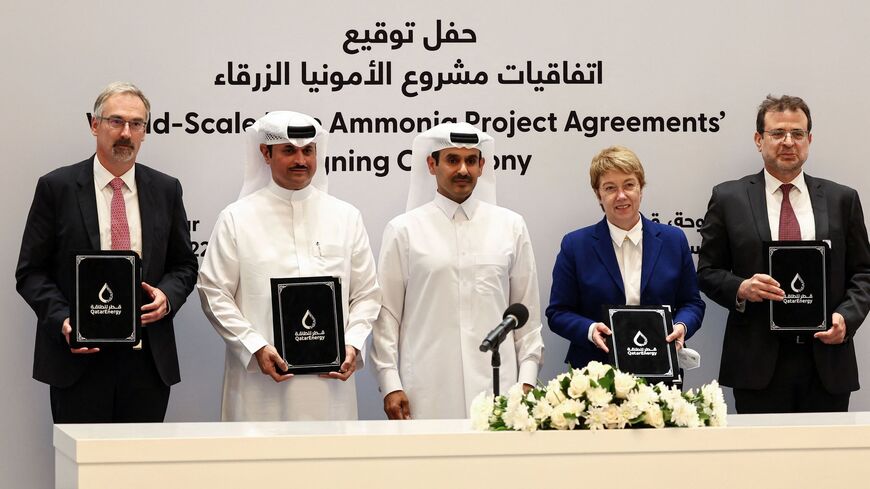 (L to R) The CEO of Uhde Business Unit at thyssenkrupp Dortmund, Cord Landsmann; the CEO of Qatar Fertiliser Company, Abdulrahman al-Suwaidi; Qatar's Minister of State for Energy Affairs and President and CEO of QatarEnergy, Saad Sherida al-Kaabi; CEO of German industrial conglomerate Thyssenkrupp, Martina Merz; and Consolidated Contractors Company area managing Director in Qatar, Oussama el-Jerbi, pose after the signing ceremony of the World-Scale Blue Ammonia Project in the Qatari capital Doha, on Aug. 31, 2022. Qatar will build the world's biggest plant for blue ammonia, a new fuel being touted as a cleaner energy source. The plant would cost $1.1 billion and start production in early 2026. - KARIM JAAFAR/AFP via Getty Images

QatarEnergy affiliates agreed to develop the roughly $1 billion Ammonia-7 project. The facility will be able to capture and sequester 1.5 million tons of carbon dioxide (CO2) per year, supply 35 megawatts of renewable electricity via solar panels, and market the product as blue ammonia, the official Qatar News Agency reported.

What is blue ammonia? Blue ammonia is derived from hydrocarbons such as crude oil. The key criteria is that the carbon dioxide emitted during the ammonia formation is captured and stored, as opposed to being released into the atmosphere, according to the Texas-based tech company KBR.