The resignations of two executives of the company managing the new administrative capital project in Cairo have raised questions about the project and its feasibility in light of the deteriorating economic situation in the country. 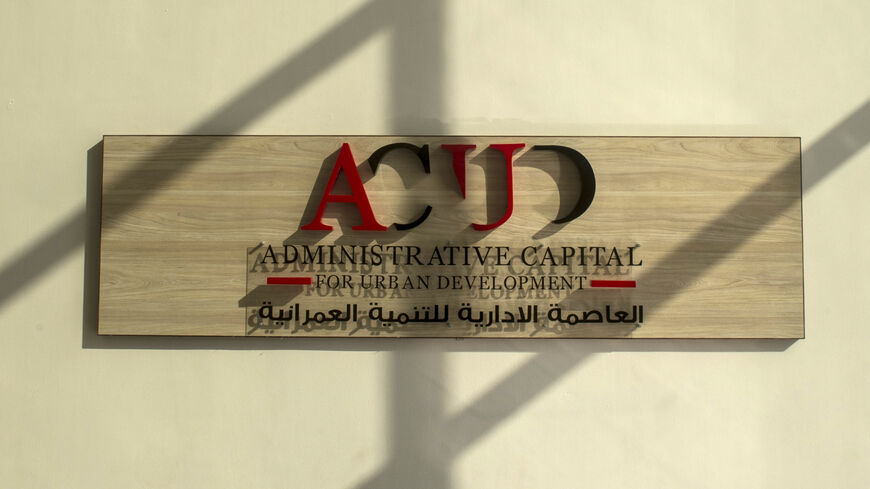 A picture taken on Nov. 2, 2017, in Cairo shows the logo of the Administrative Capital for Urban Development, which is managing the project of the new administrative capital. - KHALED DESOUKI/AFP via Getty Images

On Aug. 22, Maj. Gen. Ahmed Zaki Abdeen submitted his resignation as chair of the Administrative Capital for Urban Development (ACUD), which he joined five years ago in 2017, citing health problems and his desire to retire, local media reported.

The ACUD is the owner and developer of the new administrative capital in Egypt. The company is co-owned by the Egyptian military and the Ministry of Housing.

The new capital, located about 28 miles east of Cairo, has been under construction since 2015.

On the same day Abdeen resigned, Egyptian President Abdel Fattah al-Sisi issued a presidential decision appointing Deputy Minister of Housing for National Projects Khaled Abbas as chairman of the board of directors of the ACUD.

Speaking to Al-Monitor via phone on condition of anonymity, an informed source close to the ACUD explained that the resignations of the company’s chairman and general manager came as part of efforts to bring new blood to the company, particularly since Abdeen is 76 years old and has health problems that would limit his ability to complete his daily tasks.

The source indicated that the new chairman, Abbas, will supervise the development of the company’s projects in the coming period, including a plan to list the ACUD in the stock market in accordance with presidential directives.

Abbas will develop a timeline for the inauguration of phase one of the new administrative capital and a realistic plan for the start of phase two, based on the available funds and capabilities, the source added.

The source said, “The two executives resigned because they committed technical and construction faults by trying to speed up, in good faith, the construction projects in the new capital without waiting for the necessary licenses and approvals of technical specifications.”

The source noted that several of Abdeen’s assistants were pushing businesses and capital owners to complete the construction projects in the new capital quickly, but this haste resulted in incomplete tasks and the establishment of some residential districts and shops without the required technical and engineering specifications.

According to the source, Abdeen believed that there was a need to inaugurate the new capital as soon as possible and disagreed with the political leadership’s orientation to postpone the official opening in light of the unstable economic situation in the country.

He noted that Abdeen felt that the inauguration of the new administrative capital could not be postponed anymore, as it has been postponed multiple times in the past years.

Abdeen told Al-Monitor he resigned due to health issues, adding that he wanted to open the way for younger leaders in Egypt. He declined to comment on any problems he faced in his previous position.

Sisi postponed the opening on April 5, 2020, due to the outbreak of the COVID-19 pandemic. Again, a plan to begin relocating all government employees to the government district starting in late 2021 was also delayed due to the country's economic crisis, which was later exacerbated by the Russian-Ukrainian war.

The source said that the haste in the construction projects in the new capital and the disagreements over the opening were some of the main reasons behind the recent resignations in the ACUD.

Abbas, 55, has a good technical vision and is much younger than Abdeen, which might enable him to perform his duties efficiently as expected, the source said.

Ihab el-Desouky, professor of economics at the Sadat Academy for Management Sciences, told Al-Monitor via phone that the government has postponed the opening of several mega-national projects and rearranged its priorities for the next stage due to the significant impact of the COVID-19 crisis and the Russian-Ukrainian war on the Egyptian economy.

Desouky added that the Egyptian state is currently suffering from scarce foreign reserves. The decline in the sources of hard currency, including the Russian and Ukrainian tourist influx and the exit of foreign investment in Egypt’s debt instruments, has led to a drop in cash reserves, thus pushing the government to consider postponing the opening of the new administrative capital and some other projects.

Abdel-Khaleq Farouk, an economist and the director of the Nile Center for Economic and Strategic Studies, told Al-Monitor that Abdeen’s resignation came after he was pressured to quickly complete the construction projects and inaugurate the administrative capital.

He added that the outbreak of the COVID-19 pandemic and the Russian-Ukrainian war have forced the state to reduce the pace of the work in the new capital, which confused Abdeen who was left torn between accelerating and reducing the pace of the construction works. The lack of funds was also the reason behind his resignation, he said.

Farouk further noted that the hurdles in the negotiations with China over a $3 billion loan to implement some projects in the new capital have slowed the completion of construction works.

However, Farouk said Abbas’ appointment is a positive move as he is the first civilian chairman of the ACUD overseeing the implementation of one of the largest projects in Egypt.