Iraqi political leaders joined today to discuss a roadmap for ending current political crisis, as part of an initiative for national dialogue, with all major parties except the Sadrists represented. 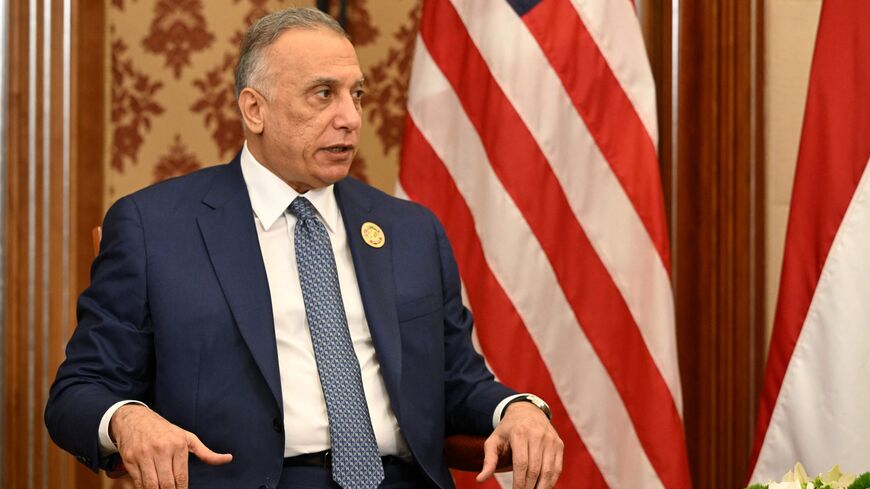 Iraq's Prime Minister Mustafa Kadhimi meets with the US president at a hotel in Saudi Arabia's Red Sea coastal city of Jeddah on July 16, 2022. - MANDEL NGAN/AFP via Getty Images

Iraqi prime minister Mustafa Kadhimi today hosted leaders of Iraqi political parties from the Shiites, Sunnis and Kurds to seek a way out of the current political crisis.

The meeting is a part of Kadhimi initiative announced yesterday. All Sunni and Kurdish parties were present, but in the Shiite field, only leaders of the Coordination Framework attended and the Sadrists did not join.

The prime minister's media office published a photo from the meeting showing an empty chair for Sadrists representative, in order to signal to Muqtada Sadr that he is welcome.

The final statement also “called on the brothers in the Sadrist movement to engage in the national dialogue, to put in place mechanisms for a comprehensive solution, to serve the aspirations of the Iraqi people and achieve their goals.”

The statement was received positively by both Sadrists and the Coordination Framework, which indicates Sadrists might attend the meetings soon.

The presence of United Nation special representative Jeanine Plasschaert was also a positive sign welcomed by both Shiite camps.

A few hours prior to the meeting, Muqtada Sadr had called upon his followers to postpone the mass protests scheduled for next Saturday. Subsequently, the Coordination Framework, which was preparing for rival mass protests, stopped the campaign.

Currently, a group of Sadrist protesters are holding sit-ins around the parliament inside the Green Zone. They stormed the parliament late last month and occupied it for some days, but they left the building two week ago after Kadhimi's call for national dialogue.

The Coordination Framework also are holding another sit-in on the Green Zone’s gate of Suspension Bridge.

Today’s meeting set important principles which may attract the Sadrists, and therefore open a space for serious dialogue between the two rival Shiite groups with the presence of the Kurds and the Sunnis.

The attendees agreed on the principle of early elections to solve the political deadlock. This means the Sadrists will have an opportunity to join the parliament again. The current crisis started when the 73 Sadrist members of the parliament withdrew after they failed to form a new government due to the Coordination Framework's obstruction. The Sadrist now are calling for dissolving the parliament and organizing another early election.

The final statement today also focused on drawing a roadmap for a comprehensive solution for Iraq's current political crisis, which is in line with Sadrists demands. Muqtada Sadr has been calling for a fundamental reform in Iraq political system including amending the constitution.

The next meeting is yet to be announced.