Iraq's political deadlock continues amid fear of a new wave of violence erupting in the streets. 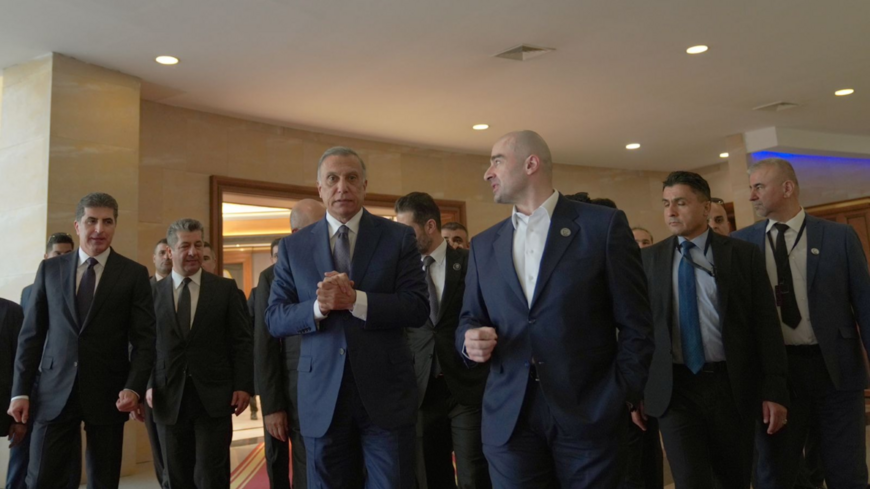 Iraqi Prime Minister Mustafa al-Kadhimi met with Kurdish leaders Monday as part of his campaign for a national dialogue to end the political deadlock.

The national dialogue and the mechanism for pushing it forward were at the top of all three meetings.

Iraqi President Barham Salih accompanied the prime minister during his trip to Erbil, alongside Bafel Talebani and other Patriotic Union of Kurdistan (PUK) leaders.

This is a significant development in the reconciliation between the two Kurdish parties. The two parties have not been able to agree on a candidate for president. The KDP was rejecting a second term for the President Salih, proposing KRG interior minister Riber Ahmed for the post, while the PUK insists on renewing Salih's term.

Salih's presence in Erbil alongside the prime minister, after years of absence, is seen as an important step towards the easing of tensions. This is especially true given that the national dialogue was a focus of the prime minister's discussions with Kurdish leaders.

“Iraq, the people of Iraq and the interests of the Iraqis are the objectives that must be the focus and the goal that everyone must present to the national dialogue table,” Kadhimi said in his speech on the fifth anniversary of the passing of former Iraqi President Jalal Talabani, which was held after Kadhimi's meetings with Kurdistan leaders.

Kadhimi initiated the national dialogue campaign a month ago. Two sessions were already held with the participation of all Iraqi political forces (except Sadrist movement leader Muqtada al-Sadr) as well as Special Representative of the UN Secretary-General for Iraq Jeanine Hennis-Plasschaert.

During the dialogue, all political forces agreed to Sadr's demand to hold early elections — though discussing the details would require Sadr's presence.

Kadhimi, among other Iraqi leaders in Erbil and Baghdad, is approaching Sadr to convince him to join the dialogue in order to draw up a comprehensive national plan to end the political deadlock.

Sadr was the biggest winner of last year's elections but failed to form a government due to his rival's success in forming a blocking third that halted the process of selecting a president as part of the government formation.

Sadr finally withdrew from the parliament, creating an opportunity for his rival — the Coordination Framework, which includes Iran-backed groups — to replace him in the parliament and move toward forming a government.

When the Coordination Framework tried to form a government led by Mohammed Shia al-Sudani — who is close to Nouri al-Maliki, an old foe of Sadr's — Sadrists stormed the parliament and stopped the process.

Sadrists withdrew from the parliament after a bloody clash took place in the Green Zone on Aug 29.

Last week, the parliament was finally able to hold its first session after resuming its work. The parliament session was met with great anger from Sadrists who protested around the Green Zone; two rockets were also shot in the area surrounding the parliament.

Thousands of protesters came to Liberation Square in central Baghdad on Oct. 1 on the anniversary of the Tishreen Movement, a widespread protest in 2019 that demanded a strong and functional national state.

The Oct. 1 protests were mostly peaceful, with no casualties and only minor injuries.

The parliament has not yet set a date for the next session, which could include the Coordination Framework making another bid to form a government.

Meanwhile, Sadrist media is warning about a new wave of protests if the Coordination Framework tries to form a government without coordinating with Sadrists.

Al-Monitor learned that there have been messages exchanged between the two sides recently that might lead to Sadr's participation in the third round of national dialogue that Kadhimi is preparing for.

Calm is expected to continue until Oct. 25, which is the anniversary of the second wave of the Tishreen Movement in 2019.