Israel's brief operation in Gaza was a military success, but credit to Prime Minister Yair Lapid for it is unlikely to win him the election. 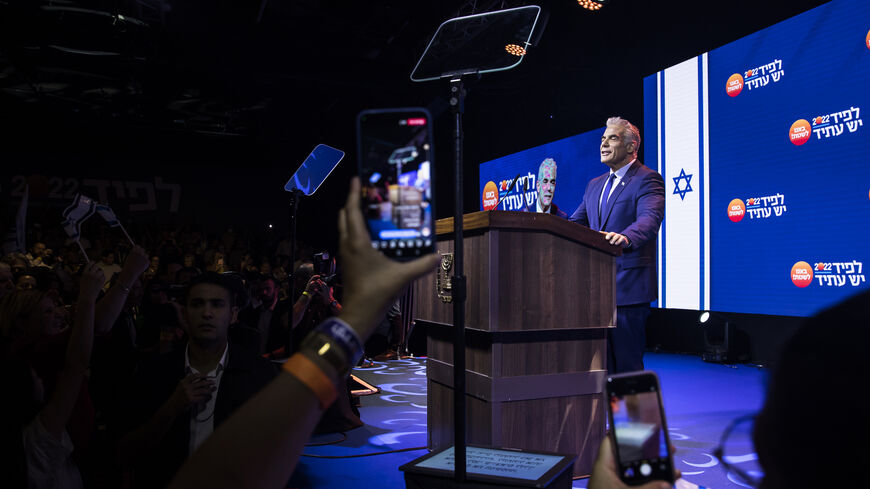 Following press reports that Israel and Islamic Jihad had agreed to a cease-fire with the help of Egyptian mediators, Israeli Prime Minister Yair Lapid said in a brief statement Aug. 7, “A short time ago, I finished assessing the situation from the Defense Ministry's Tel Aviv headquarters. The discussion included a briefing on Operation Breaking Dawn’s moves these last 24 hours,  as well as security and civilian assessments for the coming days.”

According to the IDF, 35 Palestinians were killed by Israeli army fire during the operation, including 11 civilians. It also said the failed launching of Islamic Jihad rockets caused the death of at least 15 Palestinians. Palestinian reports said 44 civilians were killed. On the Israeli side, 47 people were transported to hospitals, mostly for light injuries. The end of the fire exchange came as a relief to both populations.

Lapid has reason to be pleased, as the successful completion of Operation Breaking Dawn gave him experience in diplomatic and security affairs.

Over the last few years, and especially since the formation of the current government in 2021, Lapid has shown himself to be a talented politician who leads Israel’s second-largest political party. He also earned good marks as foreign minister. Nevertheless, he did not accumulate security experience, and his opponents love to point out that he did not serve in a combat unit while in the army.

Though Lapid served in the security cabinet for years, former Prime Minister Benjamin Netanyahu knows that this lack of experience is Lapid’s Achilles’ heel and said as much repeatedly.

Of course, Operation Breaking Dawn was a very limited military operation against a small militant group, rather than Hamas or Hezbollah. Nevertheless, it ran smoothly and the Israeli military and civilian population scarcely suffered. The leadership of Islamic Jihad was largely eliminated and the international community found little to criticize Israel for.

Lapid did well with the residents of the towns and villages surrounding the Gaza Strip. There were complaints in the days leading up to the operation as the IDF shut down roads leading to the affected region and placed the local residents under curfew, interfering with their daily lives. As the operation began, however, Lapid engaged the heads of the local authorities in dialogue. Yesterday evening, he visited the south with Defense Minister Benny Gantz. After a tour of the region and a security briefing, Lapid traveled to the town of Sderot, where he and Minister of Economic Affairs Orna Barbivai met with local government leaders.

At his meeting with local mayors and council heads, Lapid said, “The goals have been achieved. There's no benefit in continuing the operation." That he brought Barbivai to the meeting sent a clear message to everyone there: The government plans to compensate the residents for the difficulties they endured and help the town economically as well.

Lapid did not have to run the operation alone. He had an experienced defense minister beside him throughout, and its success could be attributed to Gantz. Lapid’s big success was how well he worked with Gantz. It was Gantz who approved the operation, and Lapid gave him, the chief of staff and other top military brass space to function effectively. Lapid and Gantz proved that they are able to manage a military operation responsibly and without any ego clashes.

The looming election was evident in the handling of the operation. Both Lapid and Gantz frequently posted photos of their discussions and of their visits to the Gaza border, where they met with the commanders and their troops. Such images are highly effective among Israel’s Jewish population, while regards the IDF as sacrosanct.

Still, while Lapid and Gantz worked harmoniously together, they remain political rivals. Lapid heads the largest party in the center-left bloc and sees himself as its candidate for prime minister in the fight against Netanyahu. But Gantz claims that even if Lapid’s party is larger, he won't be able to form a government because the ultra-Orthodox reject him.

In just days, if the cease-fire holds, the two will surely find themselves fighting over the center-left electorate. With the operation over, that struggle can be expected to resume with even greater vigor up until the election on Nov. 1.

And what about Netanyahu?

The former prime minister was not involved in the military and security aspects of the operation, but he still had access to the media. The press reported extensively on the meeting in which Netanyahu received a security briefing as leader of the opposition. Upon leaving the meeting, Netanyahu said that he supports the government and the defense establishment. He then added that he “offered some advice based on my own experience, not only regarding the [conflict] but also in other areas. And I think that advice can be very useful for the state of Israel.”

Meanwhile, their offices argued over the optics on the sidelines. Lapid’s office claimed it had suggested the meeting, even though Netanyahu has refused to attend previous security briefings since Lapid entered office. Netanyahu’s office countered that it had requested the briefing. Their respective offices released different photos of the closed-door meeting, Lapid's stern and Netanyahu's showing both men smiling.

But it was all petty squabbling. In an interview with Fox News, Netanyahu backed the Lapid government’s handling of the operation, well aware that Israelis appreciate politicians who put the country first, especially in wartime.

There were, however, a few people close to Netanyahu who disagreed. Former Minister of Internal Security Avid Dichter told Channel 12 News that Israel should attack Hamas as well, since it was ultimately responsible for the rocket fire as the ruling power in Gaza.

That Netanyahu missed out on this operation is unlikely to lose him supporters in the long term. Even as Lapid and Gantz benefit from the operation in upcoming polls, experts expect this advantage to fade further down the road, just as US President Joe Biden’s July 13 visit to Israel seems to have been forgotten.. The election is still three months away, a long time in a campaign.

Just as in 2021, the main issue in the upcoming election will not be security. And while the economy is also important, they will be still primarily be a referendum on Netanyahu.