Adamant to increase bilateral and international cooperation against cyber ransom and other cyberthreats, Israel and the United States signed Aug. 23 a memorandum of understanding to that effect. 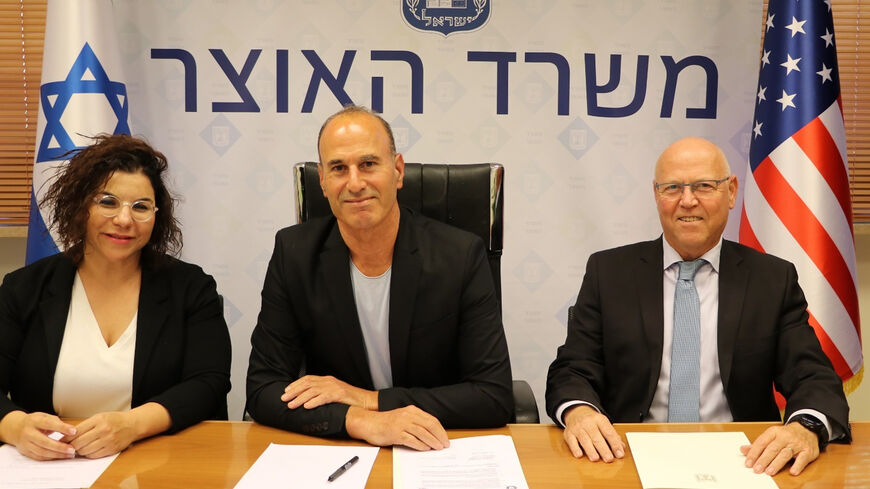 Israel and the United States signed Aug. 23 the first agreement for cyber-financial cooperation. An announcement by Israel’s Finance Ministry said the memorandum of understanding, signed with the US Department of Treasury, will contribute to strengthening the long-standing relationship and cooperation between the two countries, establishing a bilateral partnership to protect critical financial infrastructure and emerging technologies.

First and foremost, the memorandum envisages sharing of financial cyber information between agencies on both sides, including cybersecurity regulations and guidance, cybersecurity incidents and cybersecurity threat intelligence. A second domain covered by the agreement is mutual staff training and the sharing of methodologies, to strengthen the cyber resilience of financial institutions. The third domain covers competency-building activities, including joint cross-border cyber-financial exercises. The first drill is expected to take place later this year, practicing the resilience of financial institutions in the face of a cyberattack from entities that threaten to damage the immunity of the states’ financial systems.

A joint task force is expected to launch a series of meeting and exchanges between technical experts, on policy, regulation and outreach to support fintech innovations designed to increase cyberprotection and advance global compliance with international standards on anti-money laundering and counterterrorist financing. Israel and the United States are aiming not only to enhance cybersecurity cooperation bilaterally, but also expand global cooperation on this issue.

Finance Minister Avigdor Liberman said at the signature ceremony, "Today we are deepening the long-standing partnership between Israel and the US and deploying an iron dome to the financial system to protect against cyberthreats. Together, we are prepared to maintain the continuity of the supply of essential financial services for the citizens of Israel and to maintain the normal operation of the entire financial system."

US Deputy Secretary of the Treasury Wally Adeyemo declared at the ceremony, "We are pleased to welcome the Israeli government as a partner in our global effort to stop the extortion. This partnership has already resulted in real-time cyber threat data sharing to prevent ransomware distribution and other cyber-attacks from affecting the US economic sector. We look forward to expanding this partnership."

Yoni Mor, chief of the cyber, emergency and security system at the Israeli Finance Ministry, also hailed cooperation between the two countries, noting that the agreement "is a significant milestone in strengthening the concept of the cyber defense of the financial system and we see it as the first swallow for international agreements and cooperation in these areas."

The signature of the memorandum followed an Oct. 13-14 virtual meeting of the International Counter-Ransomware Initiative, organized by the White House and hosting the European Union and more than 30 countries, including Israel. At her opening remarks, deputy national security adviser Anne Neuberger explained why international cooperation to counter ransomware is important, stating, "It is an incredibly complex ecosystem. In fact, during the opening plenary, for example, the Israeli representative noted that an Israeli hospital was under attack by a ransomware attack at that moment."

Neuberger was referring to a cyberattack launched earlier that day against the Hillel hospital in the town of Hadera, which serves the north-central part of the Israeli population. The attack brought down and locked all the facility’s computer systems, both administrative and medical.

One month later, on Nov. 14, Adeyemo met in Israel with Liberman and with Israel’s National Cyber Directorate Director Yigal Unna. Following that meeting, the US Treasury Department announced a new partnership with Israel to expand bilateral cooperation in combatting ransomware.

“Harnessing both the power of international cooperation and of technology innovation will position us to support economic competitiveness, prosperity, and to combat global threats including ransomware,” said a statement issued by Adeyemo. It continued, “As the global economy recovers and ransomware and other illicit finance threats present a grave challenge to Israel and the United States, increased information exchanges, joint work and collaboration on policy, regulation and enforcement are critical to our economic and national security objectives.”

The memorandum signed Aug. 23 offers the legal and institutional framework required for US-Israeli partnership. Other steps were taken in the period between that meeting and the memorandum signature.

For instance, on May 12, President Joe Biden signed an executive order on improving the nation’s cybersecurity. The executive order opens new US federal cybersecurity contracts to Israeli companies, estimated to be worth $200 billion. Visiting Israel last week, Merlin Cyber founder David Phelps noted that the order opens up new opportunities for startups dealing with cloud security, software supply chain and zero trust access to systems, all domains Israeli companies are working on. Phelps said there is currently an “increasingly pressing need for effective data protection in today’s uncertain world,” noting the “special role of Israeli cybertechnology in filling this need.”

On July 27, Israel and the United States launched a new cybersecurity program that should offer grants of up to $1.5 million or up to 50% of research and development budgets, for startups and projects developing solutions to protect public critical infrastructure. The US Homeland Security Science and Technology Directorate, the Israel National Cyber Directorate and the joint cooperation between the Israel-US Binational Industrial Research and Development Foundation are set to lead the new program.