Egypt has launched a new cybersecurity division to protect its ministries and institutions from cyberattacks, but some political groups and activists are concerned it might also be used to curtail speech and monitor their online activities. 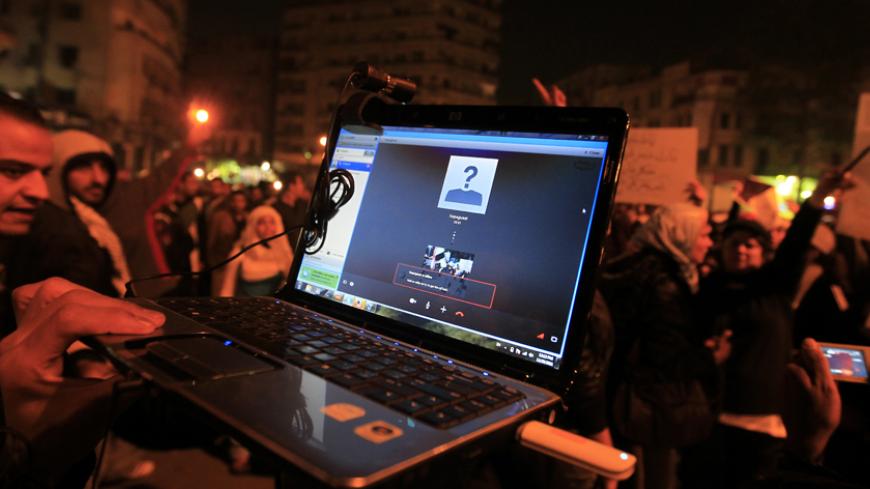 An Egyptian protester streams a demonstration via Skype as people gather in Cairo's Tahrir Square to denounce the military's attacks on women and to call for an immediate end to the violence against protesters, Dec. 20, 2011. - MOHAMMED ABED/AFP/Getty Images

CAIRO — Egyptian Prime Minister Ibrahim Mahlab decreed the establishment of the High Council for Cyber-Security (HCC) on Dec. 16. The HCC reports directly to the Council of Ministers, and its official goal is to develop a strategy to counter cyberthreats, supervise its implementation, and keep that strategy up to date with fast-moving technological developments. This announcement of the council's creation has triggered a debate about whether it will be monitoring what activists and others write or send via the Internet and social media.

The HCC is headed by Minister of Communications and Information Technology Atef Holmi. Its members include representatives from the ministries of defense, foreign affairs, interior, petroleum and mineral resources, electricity, health, water resources and irrigation, supply, communications, the general intelligence service, the central bank and three technocrats. On Dec. 31, Mahlab announced that the Information and Decision Support Center (IDSC) would also be joining the HCC. The IDSC is the cabinet's think tank, providing advice to decision makers about economic, social and political issues.

In a Dec. 17 statement to the Thomson Reuters Foundation's Aswat Masriya website, Sherif Hashem, deputy chairman of the National Telecommunication Regulatory Authority for Securing Cyberspace, said, “The council is tasked with securing the infrastructure and networks of government agencies against cyber attacks.”

Adel Abdel Sadek, director of the Arab Center for Cyberspace Research (ACCR), an independent research organization, told Al-Monitor, “The establishment of the council comes amid growing Egyptian interest in promoting cybersecurity, which has become an important part of Egyptian national security. This is reflected in the fact that the HCC includes a number of key ministries, such as the ministries of defense, interior and general intelligence, along with some specialist and technical ministries.

He also said, “The idea to create the council was the result of the increasing rate of global cyberattacks and a desire to secure Egyptian ministries and banks, which have porous electronic networks and need protection against cyberattacks.” Abdel Sadek, further stated, “It will be setting cybersecurity policy, whose dimensions are security related, economic, and social. The technical aspects will be conducted by the Computer Emergency Response Team (CERT), which was created in April 2009 to strengthen the IT infrastructures of state institutions and the banking system.”

A number of Egyptian websites have been subject to cyberattacks from the group calling itself Anonymous. The Rassd News Network (RNN) was hacked several times between December 2012 and the ouster of President Mohammed Morsi on July 3, 2013, on the grounds that RNN was affiliated with the Muslim Brotherhood and after the growth in popular anger against the group's policies. The Anonymous Middle East group also hacked the Banha University’s website in response to “insults” aimed at the founder of the Popular Current, Hamdeen Sabahi, when he was met with hostile slogans and banners opposing him while attending a seminar organized by the Faculty of Engineering at the university on April 22, 2013.

The website of the media committee of the April 6 Youth Movement was also hacked. That a number of Egyptian websites have faced cyberattacks illustrates that Egypt is not immune. Some attacks are carried out by organized groups with frightening capabilities.

The decision establishing the HCC states that its goal is to achieve cybersecurity, meaning, “information security on computers and networks, including processes and mechanisms used to protect computer equipment, information, and services from any unintentional or unauthorized interference, or from change or damage that may occur.” The decision has nevertheless raised the ire of political groups fearing that part of the HCC’s mission will be to penetrate information networks and monitor social media and communication networks. This fear was reinforced by a report on BuzzFeed News that the government had begun monitoring social media and other Internet sites through a US-based company.

Anwar Esmat Sadat, head of the Reform and Development Party, is among those demanding more clarity about the HCC. According to him, “The nature of the [new agency] and the tasks that it will perform are still mysterious and unclear.”

Ahmed Kamel al-Buhairi, spokesman for the Popular Current, told Al-Monitor, “We cannot know whether this council will restrict our freedoms on social media, monitor the Internet and restrict freedom of information since the decision, its nature and terms of reference are not clear.” He also said, “The decision, as announced by the prime minister, was shrouded in mystery in the absence of governing by-laws for the council as well as the executive regulations that will govern its work, which would clarify its goal. It is not known whether this council is technical, informational or executive.”

Abdel Sadek doubted that the council’s mission would be to monitor the Internet and social media, saying, “Other agencies are responsible for information crimes in the Interior Ministry,” referring to the General Directorate of Information and Documentation, which monitors all forms of cybercrime as well as incitement to violence and terrorism.

In light of the increasing cyberattacks taking place in many developed countries, including the United States — despite having the capacity to protect its institutions from such attacks — one could argue that it is crucial for the Egyptian government to move to protect Egyptian cyberspace. That said, the law regulating the work of the HCC should not contradict the right to free speech stipulated in the constitution, such as Article 57 — which prohibits encroachment on the sanctity of postal and electronic correspondence and stipulates the right to use all means of public communication in all forms — or Article 65 — which states that freedom of opinion and thought is guaranteed and that everyone is entitled to express his or her opinion. In addition, these rights are guaranteed in international agreements on human rights that Egypt has signed.