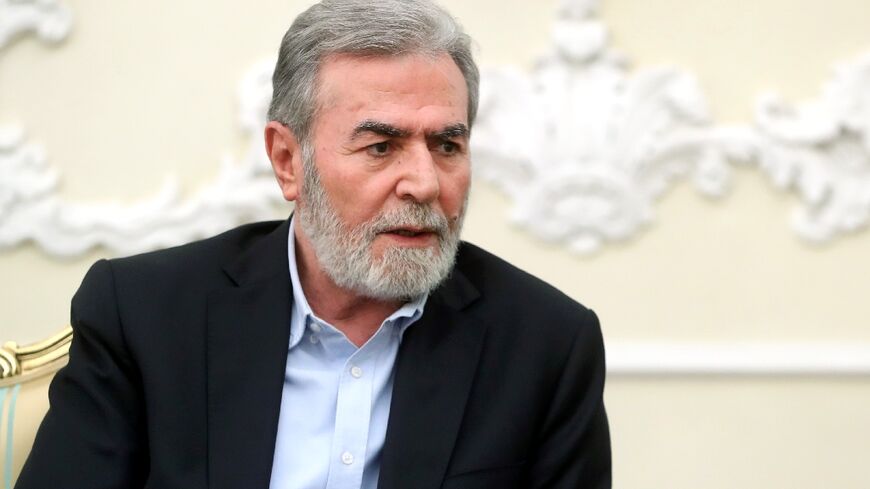 Secretary-General of the Palestinian Islamic Jihad movement Ziad al-Nakhala has met with Iranian President Ebrahim Raisi and other high-ranking officials during his visit to the Islamic republic, his group's main backer - -
Agence France-Presse
August 5, 2022 — Beirut (AFP)

The leader of Palestinian militant group Islamic Jihad vowed Friday to target Tel Aviv after an Israeli strike killed one of the group's senior commanders in the Gaza Strip.

"The Zionist enemy started this aggression and it must expect us to fight non-stop... There will be no truce after this bombing," Ziad al-Nakhala told Lebanon's Al-Mayadeen television channel from Tehran, where he has been visiting in recent days.

"There are no red lines in this battle... Tel Aviv will also be one of the targets of the resistance's missiles... as will all Zionist cities," he said.

Islamic Jihad said Friday it was mourning "the great jihadist commander Tayseer al-Jabari 'Abu Mahmud', who was killed in a Zionist assassination in Gaza City".

A child was among those killed in the strikes, the Palestinian enclave's health ministry said, while Israel's military estimated 15 combatants were killed.

The Israeli army said the strikes were part of an operation "against targets in the Palestinian Islamic Jihad" group.

Nakhala has met with Iranian President Ebrahim Raisi and other high-ranking officials during his visit to the Islamic republic, his group's main backer.

The Islamic Jihad secretary-general called on his fighters and on militants from all Palestinian factions to fight "as one" to face Israeli "aggression".

The Israeli strikes come four days after Israel closed its two border crossings with Gaza and restricted the movement of Israeli civilians living near the frontier, citing security concerns.

The measures followed the arrest in the occupied West Bank of two senior members of Islamic Jihad.