Finance Minister Ali Abdul-Amir Allawi has resigned from his post in the Iraqi government. 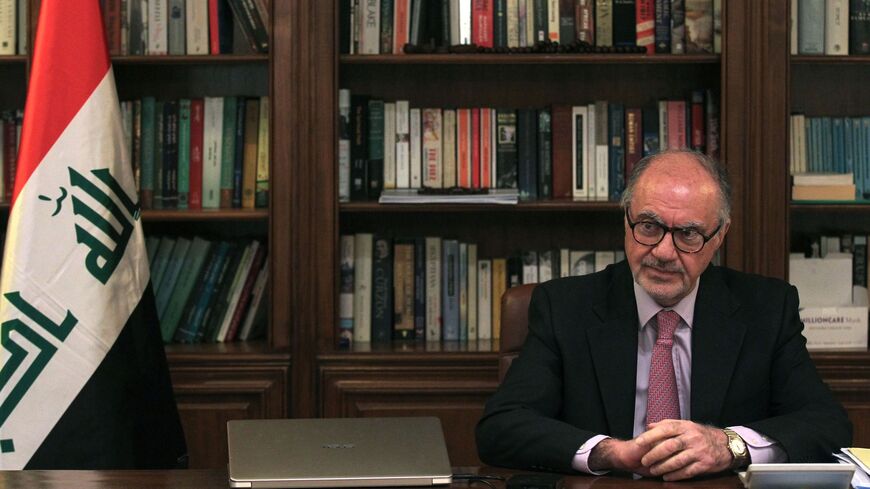 Iraq's Minister of Finance Ali Abdul-Amir Allawi listens during an interview at his residence in Baghdad, on June 22, 2020. - AHMAD AL-RUBAYE/AFP via Getty Images

Kadhimi appointed current Oil Minister Ihsan Abdul Jabbar to head the Finance Ministry in addition to his other position.

In the letter, of which Al-Monitor received a copy, Allawi praised the Kadhimi government for its great achievements in the economic sector and the foreign relations field.

He said the government had fulfilled its promises fully despite pressure and obstacles from political forces.

Allawi emphasized the government's achievements in overcoming the health crisis and economic decline due to the pandemic and added that the Iraqi economy witnessed 11% growth during this government.

The government was also able to organize fair elections with high integrity, according to the United Nations and other international organizations that monitored the elections. However, the political forces failed to form a new government — and considering the government is not able to perform normally under the current circumstances, Allawi decided to resign.

Allawi said that no government in the world can work without a budget. Out of 28 months, Kadhimi's government only had a federal budget for six months.

Allawi's resignation occurs during a sensitive time in Iraq as the two main Shiite forces — the Sadrists and the Coordination Framework — protest in and around the Green Zone where the majority of government buildings and foreign ministries are located.

The two sides are increasingly creating tension and flexing their muscles via the streets and their respective media outlets.

Both camps are preparing for yet another round of mass protests.

Sadrist leader Muqtada al-Sadr, however, asked his followers to postpone protests scheduled for Aug. 20 after Kadhimi called upon all political forces to gather Aug. 16 to discuss the political crisis and set mechanisms to end the deadlock.

“I invite the brothers, the leaders of the national political forces to a national meeting at the Government Palace tomorrow, Wednesday (Aug. 17), to start a profound national dialogue and deliberation,” Kadhimi said in a statement. “The meeting is to find solutions to the current political crisis and the current political deadlock based on the constitution and guided by the supreme national interest, and in a manner that contributes to calming the ongoing escalation and creating an appropriate environment for political and constitutional solutions to achieve the aspirations of our people.”

In his opening speech at the Cabinet meeting, Kadhimi also warned of the gravity of the current situation in Iraq, saying that the country is on the verge of collapse if the political forces do not take on the responsibility to agree on a solution to the political crisis.