Iraqi PM threatens to step down as tensions persist after clashes 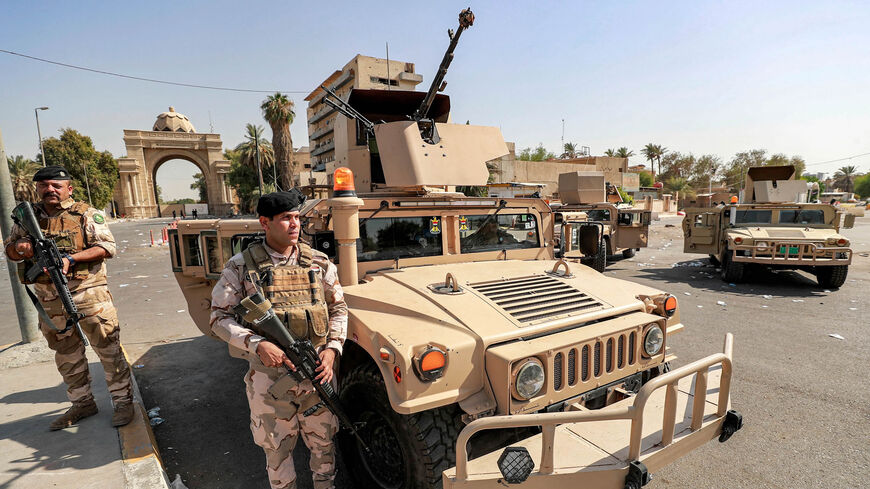 Iraqi army forces deploy to guard the entrance of the high-security Green Zone after the withdrawal of supporters of Shiite Muslim cleric Muqtada al-Sadr from the area, Baghdad, Iraq, Aug. 30, 2022. - Ahmad al-Rubaye/AFP via Getty Images

In a speech late Tuesday, Iraqi Prime Minister Mustafa al-Kadhimi slammed the militias outside of the state for the bloodshed that occurred Aug. 29, holding them responsible for the massacre that lasted 10 hours and left dozens dead and hundreds wounded.

“The pure Iraqi blood that was spilled yesterday sends a warning to every principled Iraqi: Today we must face the bitter truth and ensure that the state must have a monopoly over the use of arms,” Kadhimi said.

The intra-Shiite conflict Aug. 29 between a group of factions close to Iran and the Saraya al-Salam faction, which is affiliated with the Sadrist Movement, killed more than 20 people and left over 200 injured.

The clash took place when Sadrist protesters entered the government palace and then a group of militiamen attacked them in the areas around the palace. Soon after, Saraya al-Salam entered the area and confronted the militias.

Kadhimi said his government had adopted a policy to restrain the militias and bring them under the state's control, but their insurgency took the country to this disaster.

“For more than two years, we have been striving to maintain the state's monopoly over the use of arms, despite all the accusations, slander and missiles directed at us,” he said.

This comes in line with Muqtada al-Sadr's speech Aug. 30, where he said, “If the armed factions had been dissolved, Iraq would not have reached this situation.”

The Popular Mobilization Units (PMU), however, got involved and participated heavily in the armed clashes.

“We have formed an investigative committee to find those responsible for putting arms in the hands of those who opened fire and shot at the demonstrators and shed blood — despite our clear and strict orders prohibiting the use of live ammunition,” Kadhimi said.

Kadhimi had warned the PMU then to not get involved in the political conflict.

The head of Asaib Ahl al-Haq faction within the PMU, Qais Khazali, also slammed Kadhimi Aug. 30 for not taking strong actions against the Sadrist protesters and praised the PMU for protecting the state during the clashes the day before.

What is concerning is that the Coordination Framework, which is the rival group of the Sadrists, is moving forward with forming a new government, despite the clashes that occurred and the political conflict behind it. This would take Iraqi back to square one of the political crisis, when Sadrists started protesting against the Coordination Framework's attempt to form a government with the nomination of Muhammad Shia al-Sudani for the premiership.

Sadr was quick to react to the Coordination Framework's intention to resume parliament sessions and proceed with forming a new government, saying that they are ignoring popular demands for reform and standing in line with the militias that killed people two days ago.

"This is my call to our neighbor Iran to rein in her camel [a metaphor referring to Iran-backed militias] in Iraq, or else it will regret it when it is too late," Muhammad Salih al-Iraqi, a figure close to Sadr who publishes official Sadrist positions, tweeted today.

In his speech, Kadhimi threatened to declare his position vacant if the current conflict continues. Kadhimi is currently serving as caretaker prime minister as a political deadlock persists on forming a new government.

“Should they [the militias] continue in this path [acting outside of the state], I will take the moral and patriotic decision to vacate my position according to Article 81 of the constitution and hold them accountable to the Iraqi people and the history books,” he said.

According to Article 81 of the Iraqi Constitution, if the prime minister vacates his position, the president will automatically replace him and he has to appoint a new prime minister within 15 days.

The political parties have failed to form a new government in the 10 months since the elections. Thus, replacing the prime minister in such environment would be impossible.