The Hamas-affiliated Ministry of Interior has forbidden concerts on public streets, upsetting many residents and artists who consider music a crucial part of their lives and livelihoods. 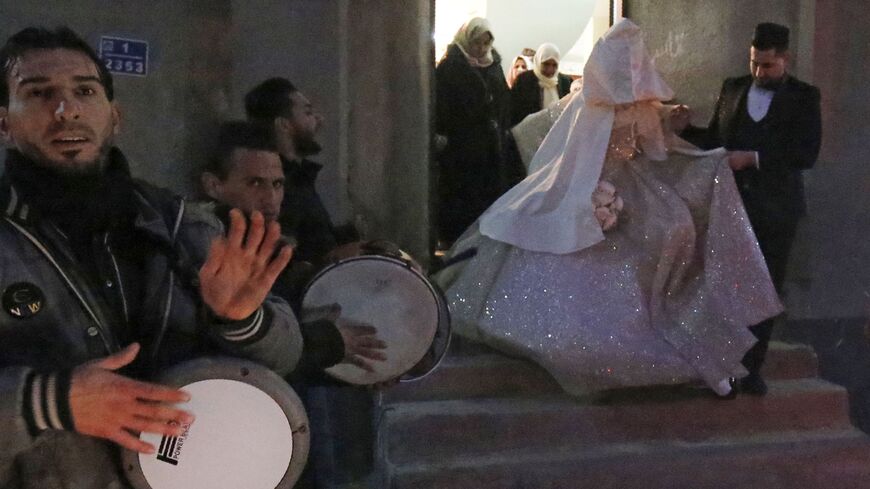 Palestinian groom Ahmed Soboh accompanies his wife ahead of their wedding ceremony in the southern Gaza Strip refugee camp of Rafah on Feb. 5, 2020. - SAID KHATIB/AFP via Getty Images

A correspondent in Gaza
September 1, 2022

Concerts and live performances are traditionally an integral part of every Gazan wedding, be they held on the street or in a venue. Gazans dance to tarab songs and blow off steam amid the hardships and violence that continuously plague Gaza.

But on July 14, the Hamas-affiliated Interior Ministry banned street concerts, to wide anger among Gazan residents and musicians.

Wael Hammouda, a Gazan who is planning to get married, had to cancel his wedding. Hammouda told Al-Monitor, “All the young men look forward to their wedding so they dance the night away with their friends, especially in Gaza, where conditions are very difficult. We have not held any concerts in two years due to the coronavirus pandemic and the ensuing lockdowns. What’s the reason for this decision? Why do they want to ban such concerts when they bring so much joy to Gazans of all ages?”

He lamented, “I was really eager to organize a big wedding party in late July, but I was shocked by the decision. My family told me I should celebrate my wedding in a hall instead, but wedding halls cannot accommodate all my family members, relatives, neighbors and friends, unlike large streets where everyone can enjoy their time. Also, wedding halls are expensive.”

Many Gazans traditionally hold week-long celebrations ahead of their weddings, usually in public squares and streets.

Ayman al-Batniji, spokesman for the Gaza police, explained in a July 14 press statement that many street concerts would be canceled and wedding concerts would be banned due to numerous complaints by citizens. He explained thaand added that the decision was made to fight noise pollution. He also warned that violators would be prosecuted.

Musician Akrah Hasan owns a music store and studio as well as an event company. He told Al-Monitor, “I have been playing music in wedding and family concerts for 35 years now. Such concerts bring joy to the devastated people of Gaza. We work to make people happy, especially in Gaza, where everything's so hard.”

“I worked very hard to get to where I am now, and that is all I do. I founded Home of Music of Gaza and I hired 47 workers specializing in lighting, photography, video, music playing and singing. Concerts are a source of livelihood for all of us. Each and every worker provides for 8-10 household members. How could they issue such a decision when concerts help people make ends meet?” he asked.

He went on, “Art and music are widely neglected in Gaza. All we have are these wedding concerts. For every concert, my band and I earn $1,000, yet the music sector is the first to be affected by any development, be it a round of fighting, Israeli military operations or the coronavirus pandemic and lockdowns. At the beginning of its rule, Hamas imposed unjust measures, as it deemed art and music to be against Islamic law, but this changed a couple of years ago, as it started to ease its restrictions on Gazans. This move will be catastrophic if not revoked.”

Hasan explained that such concerts employ some 1,000 people on a daily basis such as musicians, even suppliers and service workers. But even beyond the economic concerns, he said, "Music helps us express ourselves. We have a message to convey to the whole world that the Gazan people deserve life, not war.”

Hasan went on, “When such decisions are issued, we are left helpless as we do not have a syndicate to voice our concerns." He said the lockdown measures during the pandemic were particularly difficult. "A year ago, Hamas issued a decision canceling wedding concerts both on the street and in wedding halls. It was a very harsh decision, and many people who were planning to get married had to call off their parties.”

Some Gaza residents see things differently. Assaad Shahwan told Al-Monitor, “I was happy to hear about the decision, as concerts annoy people and can last for six straight hours. We have children, elderly people or students who need to study calmly. I am definitely not a supporter of each and every decision issued by Hamas, but I fully support this one.”

One Gazan singer told Al-Monitor on condition of anonymity, “I think that the decision to ban wedding concerts is designed to boost hotel bookings, yet it is illogical as there are thousands of young men planning to get married and there are not enough wedding halls for all of them. Also, such halls are very expensive.”

The singer added, “Two days following the decision, I sang in a concert, not knowing that there was a ban. I was surprised when security forces brought me to the police station for questioning. They confiscated my musical instruments on the grounds that I held a concert without a permit from the Ministry of Interior. I spent 24 hours in jail and was forced to sign a document acknowledging that any further violations would mean a 30,000-shekel fine.”

Musician and composer Bassem Shakhsa told Al-Monitor that many Gazans depend on the event industry for their livelihood and that a syndicate is needed to defend their rights.