Gazans fight for their right to party

The Gaza Interior Ministry issued a ban on parties and events being held on main roads because of complaints about loud music and street closures. 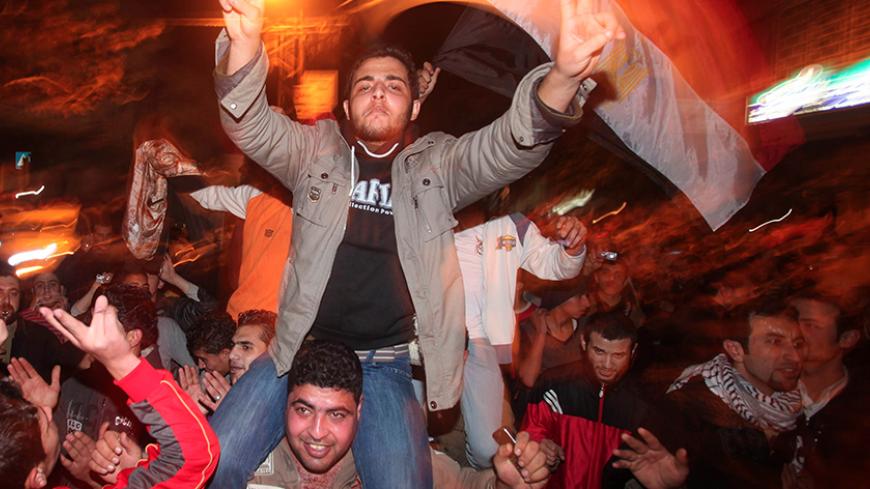 GAZA CITY, Gaza Strip — If the Hamas-run Interior Ministry has its way, there'll be no more dancing in the streets of the Gaza Strip. On Nov. 16, the ministry issued a regulation prohibiting parties and other events on public thoroughfares beginning in January. If the restriction is implemented, a Palestinian tradition will disappear. Based on the controversy the decision has generated, however, it will be difficult to enforce, especially given the small number of affordable indoor alternative venues.

The controversy is playing out on social media and in other forums, as the decision affects not only parties, but also wedding receptions and the tradition of holding funereal gatherings on public streets and property, with hundreds in attendance. The upcoming weeks will reveal whether Gazans are willing to accept the decision, which is similar to previous bans issued by the Interior Ministry, including one in April, or whether the ministry will be able to implement it.

Ministry officials claim that they are acting in response to frequent noise complaints. Big public events often disturb people who are in poor health and students who need to study, in addition to inconveniencing others when major streets are sometimes closed down.

Ayman al-Batniji, a spokesman for the Gaza police, told Al-Monitor that the decision does not affect parties in enclosed areas or away from main roads as long as they do not disturb residents. The move aims to prevent encroachment on public property, including hourlong street closures and blaring music that bothers residents, especially at night. Batniji said the police will be charging offenders, particularly those who rent out audio equipment.

Ibrahim Qurainawi, an audio equipment lessor from the Bureij refugee camp in central Gaza, told Al-Monitor that to avoid having his equipment confiscated, he will not take part in any event that requires closing a main street. Qurainawi hopes the restrictions won't be too severe. He said he makes 250 shekels ($65) renting his audio equipment for three or four hours, and that is his only source of income.

Ahmed Abdel Aal, a youth activist, said he supports the ministry's decision, because, he believes, it reflects the wishes of a large segment of Gaza’s population. Closing main streets and roads to hold parties is not only an inconvenience, it also blocks the passage of ambulances and fire trucks, he said. Aal also thinks, however, that the ministry should limit the restriction to main streets, leaving small streets and alleys free for events.

The tradition in Gaza of gathering outdoors is a necessity these days in light of the difficult economic conditions that prevent people, especially young ones getting married, from renting halls, Aal said.

Abdul Rahman Mohammed of the Nuseirat refugee camp in central Gaza is planning a wedding for the beginning of next year. He told Al-Monitor that his only option is to hold the party in the street near his small home because he is unable to rent a hall. He said he will try to limit the celebration to three hours, out of consideration for his neighbors and any students studying for exams. Such parties usually start around 7 p.m.

Mohammed said the Ministry of Youth and Sports should make large halls in or near neighborhoods available for a small fee. Renting a hall often costs $700 to $1,000 for a wedding party, a large sum that most young couples cannot afford.

Essam Badwan of Gaza City told Al-Monitor that he has complained numerous times to the police about loud street parties. The noise bothers his mother, who suffers from high blood pressure, migraines and depression. She often ends up screaming because of the loud music and fireworks. Badwan’s home is near a large yard that residents use for events because the streets in the neighborhood are too small.

“I've asked my neighbors more than once to play instruments and music quietly and for the party not to run late, on account of my mother’s health condition. However, my neighbors often say that their party is a once-in-a-lifetime event, and they want to enjoy it,” he said. “Policemen take no action, and every time I complain, they tell me there is no law prohibiting parties near homes. They said that when such a decision is made, they will act on it.”