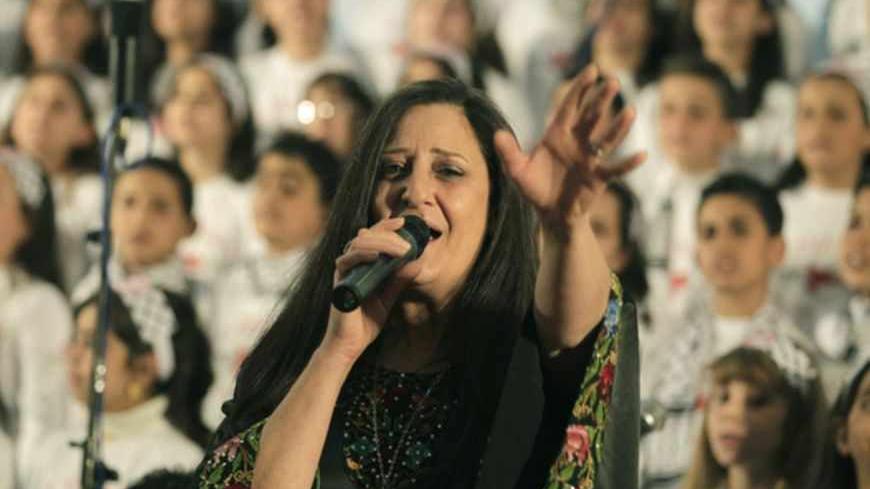 Palestinian singer Reem Talhami from the West Bank, sings with choir members, who attend an UNRWA (United Nations Relief and Works Agency for Palestine Refugees in the Near East) funded school, during a concert on April 23, 2013, in Gaza City. - MOHAMMED ABED/AFP/Getty Images

"I'm even happier than I appear." With these words, Palestinian artist Reem Talhami began the concert to launch her first album in Gaza City, a place where musical concerts have typically been banned since Hamas came to power. She received warm applause from the audience, which swayed in delight to the beat of two songs that she sang from the new album, "Carried by the Night."

The album features 10 songs. The lyrics were written by Gazan poet Khaled Jumaa, and Saeed Murad composed the melodies. Talhami sang these songs, which primarily aim to describe Gaza, she told Al-Monitor, "as we see it and as we hope for it to be, far removed from the news reports that only contain killing and destruction in this ancient city."

Talhami noted, "The words of these songs are far removed from killing, destruction, war and bombing. They take you to a wider horizon and another space, filled with love and hope, as seen by the writer and as we all wish to see."

Talhami was born in the Arab Israeli city of Shefa-Amr. She studied singing at the Rubin Institute in Jerusalem, where she currently resides, for five years, graduating in 1996. She has participated in a number of local and international festivals, singing songs that primarily express Palestinian heritage and nationalism.

On why she selected Gaza City to launch her first album, Talhami said, "In recent years, I've noticed that, whether intentionally or not, Gaza and Gazan intellectuals have been marginalized in Arab and Palestinian cultural activities. Through my participation in these activities, I found that Gaza was absent. So, through this album, I wanted to express my absolute rejection of this marginalization of Gaza City, a city I love."

Since the imposition of the Israeli blockade, the Gaza Strip has been characterized by a state of cultural stagnation. This is due to the difficulty artists and intellectuals have faced traveling between the West Bank and Gaza through the Rafah crossing since the first years of the blockade. This is compounded by the pressures resulting from the political divide between Fatah and Hamas.

Talhami explained, "It was a great honor for me to be a part of this artistic work, which was in preparation for two and half years before now being revealed to the public. I am very proud of it. Although I wanted to record the album in a studio in Gaza, circumstances prevented us from doing that." She described as "shameful” the West Bank–Gaza political divide and lamented the inability of the Palestinian people, "who have confronted various challenges," to force politicians to reach a compromise to restore unity between the two parts of the nation.

Those attending the Gaza concert, mostly youths, of both genders, swayed to Talhami’s songs at times and applauded at others. The joy was apparent in their faces.

Ahmed Rizaq, 21, was one of those in attendance, listening intently to the words and music and applauding warmly. He said to Al-Monitor, "I'm here so that I can live in the Gaza I want and desire. We have been lacking these types of cultural and artistic activities. My presence here and listening to the lyrics of Talhami's songs helps me to confront the difficulties we face in Gaza."

Rahaf al-Batniji, 22, agreed with Rizaq, and offered that it was the first time she had attended a concert with singing of this kind. These songs left a notable impression on her psyche, which has endured political and psychological pressures in her daily life.

She told Al-Monitor, "What we see and hear today is an exception. This is not the reality we live. Every time I've left the country I've made an effort to attend a musical concert. I'm amazed today to see a small concert in Gaza City."

Since taking power, the Hamas-led government in Gaza has typically banned all private music concerts. They justify the ban by arguing that the concerts do not reflect the "customs and traditions" of the Palestinian people.

Speaking to Al-Monitor, Talhami directed a message to the government in Gaza: "Everyone must realize that goal-oriented singing is a means of resistance. Our battle today with the Israeli occupation is a cultural battle, not another type of battle."

Following the concert to launch her album, held in the courtyard of the French Cultural Center, she said, "I think that differences of opinion do not undermine the entire cause. The Palestinian people are simple. They love art and singing. I think that it's an integral part of our culture, which reflects Palestinians and is a part of the primary struggle."

Hazem Balousha is a Palestinian journalist based in Gaza City. He has worked as a news producer for BBC World Service, as well as contributed to Deutsche Welle, The Guardian, Al-Raya (Qatar) and other publications. Balousha covered Israel's Operation Cast Lead in Gaza in 2008 and the conflict between Fatah and Hamas in 2007. He is also the founder of the Palestinian Institute for Communication and Development (PICD) and has a master's degree in international relations and a BA in journalism. On Twitter: @iHaZeMi