Ukraine claims a Syrian ship docked in Lebanon is carrying Ukrainian wheat and barley that was stolen by Russia and is being offering at a discount. 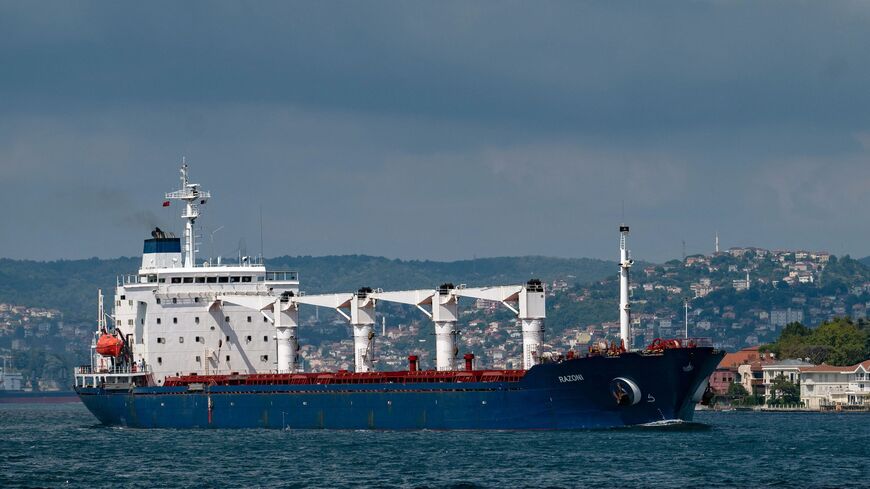 Sierra Leone-flagged cargo vessel Razoni sails along the Bosporus past Istanbul on Aug. 3, 2022, after being officially inspected. - YASIN AKGUL/AFP via Getty Images

Today, the ship received permission to cross the Bosporus, from where it can traverse the Mediterranean Sea to Lebanon, The Associated Press reported.

The vessel is named Razoni and flies the flag of Sierra Leone. It was positioned at the top of the Bosporus today in the afternoon local time. The ship listed its destination as Tripoli, Lebanon, according to the ship-tracking website MarineTraffic.

Why it matters: Razoni is set to be the first ship to bring Ukrainian grain to Lebanon since the Russian invasion of Ukraine in February. Ukraine and Russia export wheat to several Middle Eastern states, including Lebanon. The war severely disrupted these exports. Last month, Turkey brokered an agreement between Ukraine and Russia on the safe passage of Ukrainian grain out of the Black Sea. Part of the deal stipulates that Turkey inspect the shipments, hence the permission Razoni received today.

Lebanon, which was already suffering from a debilitating economic and energy crisis, was hit hard by the Russian invasion. There have been wheat shortages in Lebanon this summer, leading to long lines at bakeries and some Lebanese going hungry.

Know more: Razoni’s voyage comes amid a dispute involving Ukraine and Lebanon over grain shipments. The Ukrainian Embassy in Beirut said that a ship known as Laodicea, which is currently docked in Tripoli, is carrying Ukrainian grain stolen by Russia. A Lebanese customs official told the AP last week that there is nothing wrong with the ship’s contents.

The Ukrainian Embassy is not convinced, however. Yesterday, the embassy offered to buy the wheat and barley aboard the ship at what it said were below market prices, the embassy said in a tweet.

On Aug. 1, the embassy said that the ship will be held in Lebanon for another 72 hours.

Ukraine has accused Russia of stealing grain from its territory throughout the war.

Update: On Aug. 4, a Lebanese official said that Laodicea left Lebanese waters. A Syrian official later said the ship arrived in the port of Tartous.