Turkey’s president, long criticized for sidelining and politicizing Turkey’s foreign service, is urging ambassadors to do their best to ensure that Turks abroad can participate in upcoming elections. 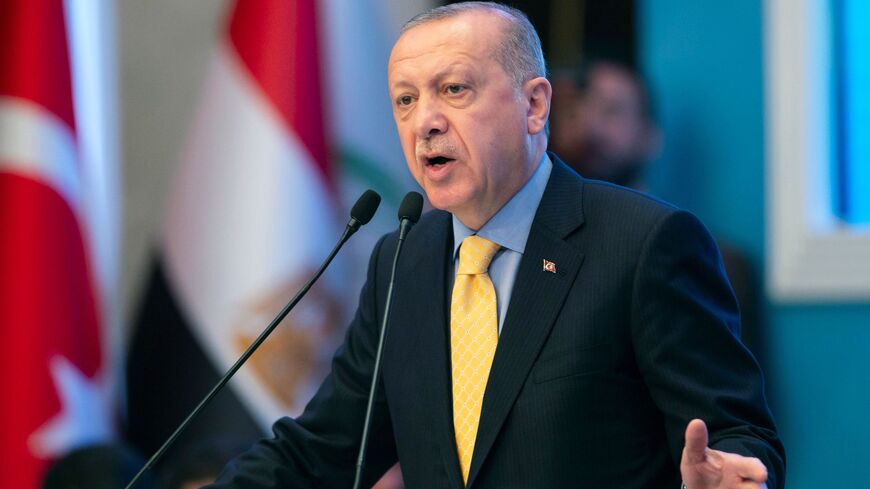 Turkish President Recep Tayyip Erdogan delivers a speech during a special meeting of the Organisation of Islamic Cooperation in Istanbul, on March 22, 2019, to discuss the March 15 deadly attacks on two mosques in Christchurch, New Zealand. - YASIN AKGUL/AFP via Getty Images

Speaking at the Foreign Ministry’s annual ambassadors' conference Monday, the president said that “cultural racism” was on the rise globally, particularly in Western countries. “Insulting women wearing headscarves in the middle of streets, burning our sacred book Quran under police protection, leaving a severed pig’s head at our mosques … all these examples lay bare the frightening dimensions of Islamophobia,” he said, referring to reported cases in Sweden, Austria and Germany. The Turkish president also charged that some European countries were shutting down associations and mosques with “flimsy excuses.”

“I expect you to stand by our people more firmly and defend our citizens’ rights and dignity determinedly under all circumstances. We should find a way to neutralize the increasingly intensifying pressure on associations and mosques through political and legal channels,” the president told ambassadors.

With the upcoming presidential and parliamentary elections high on his agenda, Erdogan urged the country’s representatives abroad to ensure that Turks eligible to vote could easily reach a ballot box and that Gulenists and other “terrorist groups” would not be able to undermine the elections. The request is crucial: Erdogan and his Justice and Development Party (AKP) count on the vote of Turks who live abroad in an election that promises to be a tight race. Though only half of the Turks abroad voted in the last elections in 2018, one out of each voter who cast their vote at the foreign representations or Turkish border posts voted for the AKP. The campaign zeal, however, may occasionally lead to diplomatic clashes. In 2017, ahead of a referendum that expanded presidential powers, the AKP’s aggressive campaigning and attempts to hold large rallies in various European cities created a diplomatic crisis with the Netherlands.

“Turkiye (as Turkey is now called in all official speeches) can turn its back neither on the East nor the West. We need to maintain strong relations with both, like the double-headed eagle symbolizing the Grand Seljuk State,” Erdogan said, referring to the 11th-century empire that ruled Anatolia.

The president also focused on the fast-growing number of Turkey’s representations and what he called Turkey’s increased weight in international organizations.

“With its 255 foreign missions, Turkey ranks today among the top five countries that have the most extensive diplomatic network in the world,” he said. “As part of our Africa Partnership Policy, we have embassies in 44 of the 54 countries. In Latin America, we have raised the number of our embassies to 18.”

For many Turkish ambassadors listening to Erdogan at the Presidential Palace, however, his words on the ever-growing Turkish representations are hardly reassuring. “Just like the eunuchs of the Ottoman court, the Turkish Foreign Ministry seems to grow in size. But the fact remains that we are castrated,” a Turkish diplomat quipped to Al-Monitor. The diplomat, who requested anonymity, complained that most critical decisions were taken at the Presidency without even informing the Foreign Ministry as a courtesy. Ankara sources maintain that Turkey’s embassies in Finland and Sweden — not to mention the Turkish delegation to NATO — learned of Turkey’s veto to the alliance’s northern enlargement only after Erdogan made the declaration, leaving the diplomats uninformed and embarrassed before their interlocutors.

The ever-increasing number of Turkey’s representations does little to increase the ministry’s power and influence. Many of the recently opened embassies are “in name only” with a skeletal staff and often don't have enough to do because the bilateral ties are dormant or low-key. But career diplomats in their early 50s — who passed competitive and challenging bilingual exams in the 1990s — are often sent to those posts while more crucial positions are filled with “political appointees,” or party men and women with links to the ruling party.

According to a recent research paper by two academics at Haci Bayram University, one of every five ambassadors is a political appointee, which would have been unthinkable before the AKP government.  Some of the political appointees do have experience in foreign policy. Murat Mercan, Turkey’s current ambassador to Washington, was an AKP founding member and a leading figure in the party’s foreign policy team for years. He became Turkey’s ambassador first to Tokyo, then to Washington. Egemen Bagis, another Erdogan loyalist who served as the president’s interpreter for years and then as chief negotiator for Turkey’s accession talks to the European Union, is currently ambassador to the Czech Republic, which has just taken over the rotating presidency of the European Union. Persistent capital rumors indicate that Ibrahim Kalin, the presidential spokesman and Turkey’s de facto national security chief, has his eyes on the post of Turkey’s permanent representative to the UN.

But the lack of ambassadorial prospects forces some of Turkey’s diplomats to seek early retirement and make a career in media or international think tanks. Often, they take up the ranks of the opposition parties, where they make fiery speeches criticizing the government’s foreign policy gaffes, such as IYI Party’s Ahmet Erozan, a former diplomat, who mocked the government for launching naval cooperation with landlocked Zambia last spring.