The main opposition CHP announced an hour before the session that it would vote against the motion. 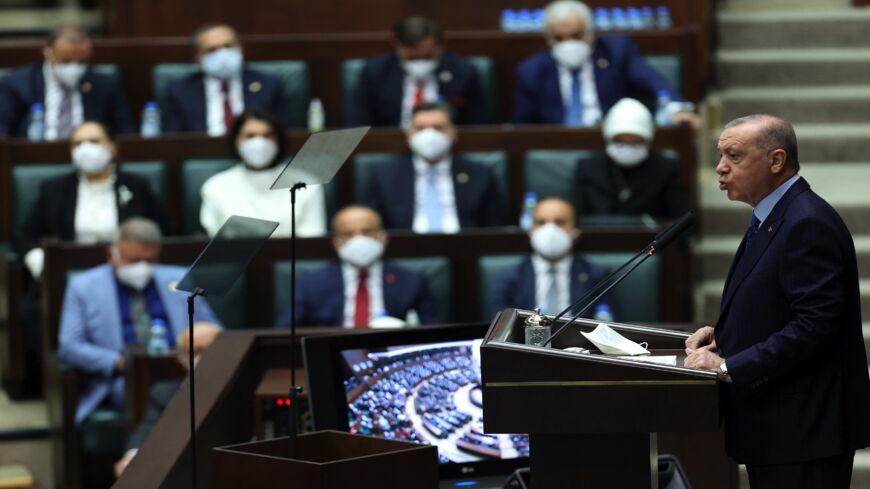 Turkish President and leader of the Justice and Development Party Party Recep Tayyip Erdogan delivers a speech during the parliamentary group meeting at the Grand National Assembly of Turkey in Ankara, on Oct. 6, 2021. - ADEM ALTAN/AFP via Getty Images)

Amid rumors of a Turkish military offensive in northern Syria, the Turkish parliament ratified today a motion that extends the government’s mandate of carrying out cross-border operations in Iraq and Syria for another two years.

In a surprise move an hour before the General Assembly, the main opposition Republican People’s Party (CHP) announced it would vote against the motion. The party, which has 135 deputies in the 583-seat parliament, had voted for the motion last year, and many Ankara pundits thought it would do so again this year.

CHP Chair Kemal Kilicdaroglu, who spoke before the parliamentary session, said several factors — including the request for a two-year mandate unlike previous motions that are limited to 12 months — caused the change in his party’s position.

The motion’s term of 24 months is largely attributed to the government’s desire not to pass the mandate through parliament next year, when it will be focused on elections scheduled for June 2023, particularly if it will call for snap elections.

Deputies of the ruling Justice and Development Party (AKP) with 287 seats, and the AKP's partner, the right-wing Nationalist Movement Party (MHP) with 48 seats, voted in favor of the motion. CHP ally IYI also voted in favor. Pro-Kurdish Peoples’ Democratic Party (HDP) and the Workers' Party of Turkey, with 56 and four seats, respectively, voted against it. AKP-offshoot the Democracy and Progress Party (DEVA), which has a single member, abstained.

The motion refers to “constantly escalating” risks and threats near Turkey’s southern border, naming the Kurdistan Workers Party (PKK), the People’s Protection Units (YPG), “the US-backed Kurdish Syrian Democratic Forces [SDF]” and Islamic State as terrorist groups that continue their activities against Turkey. While the text largely resembles the last one passed in 2020, whose mandate runs out on Oct. 30, it said this time that the YPG “continued to carry out terrorist activities in all over Syria,” not just at Turkey’s borders.

Kilicdaroglu said his party also opposed the wording in the text that would authorize the government to invite foreign troops to Turkish territory — a point that was echoed by CHP’s strategic partner, the IYI Party.

Calling the motion a “muddle,” Ahmet Kamil Erozan, the IYI Party’s deputy chair for international relations and a former diplomat, said the reference to the presence of foreign troops was unclear. “Who are those foreign soldiers that the president wants to invite?”

Ilhan Uzgel, an international relations scholar and the author of “Turkey’s Neighbors,” agreed that endorsing the president with powers to invite foreign troops was problematic. “Who are those foreign troops? Is it a reference to the Syrian National Army? If it is, it would be a vast mistake to legitimize this group through a parliamentary motion,” he told Al-Monitor.

While voting yes to the motion, the IYI Party warned the government against a military offensive in Syria, particularly as “an adventure before elections.”

“A new military operation in Syria would serve no political goal. A safe zone in Syria would not solve anything; what you need is an overall solution in Syria, and that can only be done through dialogue with (Syrian President Bashar al-) Assad,” Erozan said. “Peace in Syria does not simply pass through Washington and Moscow, but Damascus. We will vote for a yes out of consideration for the safety of our troops who are already there, but our yes should not be interpreted as a support to the government’s Syrian policy.”

The strongest opposition to the motion came from the HDP, which lobbied fervently for a no vote among the opposition, particularly with the CHP.

“Those who want a solution to the Kurdish problem in parliament should vote against this motion,” HDP co-chair Pervin Buldan said, referring to Kilicdaroglu’s remarks in September that if a Kurdish problem was to be solved, it would have to be done with a legitimate body, meaning the HDP should remain in parliament rather than be banned.

Imam Tascier, HDP deputy from the mainly Kurdish southeastern city of Diyarbakir, put it more bluntly. “If the CHP votes for a yes, no Kurd should vote for CHP nor think the CHP is any different than the AKP,” he tweeted.

Pro-government papers and pundits have attributed the CHP’s position to its plans to strike an alliance with the Kurdish parties in the next elections. Last month, the CHP visited the Kurdistan Region of Iraq in a bid to shed its anti-Kurdish image in the run-up to presidential and parliamentary elections.

Two days ahead of the vote, 23 civil society groups called on the members of parliament to vote against the bill. The associations, which mostly consist of pro-Kurdish and Alevi groups, asked parliament not to yield their say over sending troops abroad to a single person — meaning President Recep Tayyip Erdogan.

The motion comes in the wake of Ankara’s recent but ambiguous hints at new cross-border military operations after two police officers were killed on Oct. 7. Erdogan said at a Cabinet meeting in mid-October that Ankara was determined to eliminate threats to Turkey’s security from northern Syria. He said the attack by the YPG that killed two Turkish police officers, which Ankara considers an extension of the outlawed PKK, had been the final straw.

Erdogan, who hopes to meet US President Joe Biden this weekend, will now have the mandate in his pocket at the meeting. Reuters quoted an unnamed official who said the Turkish president would talk with his Russian counterpart, Vladimir Putin, after his talks with Biden.