Drones strike US base in Syria

Coalition forces "successfully engaged" one of the drones targeting al-Tanf and no one was hurt in the incident. 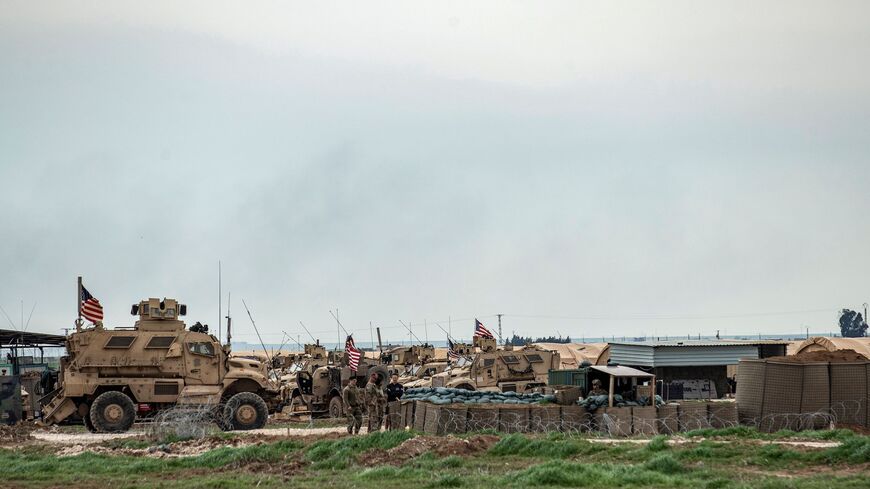 This picture taken on March 6, 2020, shows a view of US soldiers and military vehicles at a military base used by forces that are part of the international military intervention against the Islamic State in Rmeilan in Syria's northeastern Hasakeh province. - DELIL SOULEIMAN/AFP via Getty Images

Al-Tanf, a remote US military outpost in southern Syria, came under attack by “multiple” drones early Monday morning in the latest attack on American forces and the militias they support in the country.

No one was reported hurt and no property damaged, though one of the drones exploded within a compound used by the local US-backed Syrian militia known as Maghawir al-Thawra (Commandos of the Revolution).

Another drone was “successfully engaged” by the US-led coalition, according to a statement released this morning. Other drones involved in the attack “were not successful” in causing any harm, the coalition said.

“Such attacks put the lives of innocent Syrian civilians at risk and undermine the significant efforts by our partner forces to maintain the lasting defeat of ISIS,” US Army Maj. Gen. John Brennan, commander of the US-led international coalition in Iraq and Syria, said in the statement.

“Coalition personnel retain the right to self-defense, and we will take appropriate measures to protect our forces,” Brennan said.

The context: The al-Tanf garrison, which sits on Syria’s southern border with Iraq and Jordan, was first established as part of the US-led multinational fight against the Islamic State.

Policy-makers during the Trump administration opted to keep US forces at the base as the war against IS wound down. The site occupies a key location on the Baghdad-Damascus highway, a route thought to be coveted by Iran-backed militias seeking to move personnel and weapons westward into the Levant and potentially within closer range of Israel.

Russian aircraft bombed an outpost affiliated with al-Tanf in June after Russian officers alleged to US counterparts that Syrian government troops, which Russia backs, had come under attack. The United States says the militias it backs in Syria are only permitted to fight the Islamic State unless acting in self-defense.

Last October, at least five drones struck al-Tanf in what the coalition called “a deliberate and coordinated attack." The barrage was thought to have been carried out by Iran-backed militias that are also aligned with the Syrian regime.

US forces received intelligence ahead of the strike and relocated. The blasts damaged a sleeping quarters, a chapel and a gym at the base, but no one was hurt, a Pentagon official told Al-Monitor at the time.

Know more: This month the Biden administration accused China’s government of fueling a drone arms race in the Middle East by equipping Arab states in the Gulf while allowing a flow of other Chinese-made drones to Iran-backed militias, as Jared Szuba reports.

Just a few miles from al-Tanf, an estimated 7-10,000 Syrian civilians who fled the regime live in destitution in a makeshift displaced persons’ camp called Rukban. Despite pleas from activists and lawmakers in Congress, the Biden and Trump administrations have done little to alleviate conditions at the camp.