Putin’s recent trip to Tehran was a PR win for the Russian president, but is unlikely to result in any further concessions for Iran. 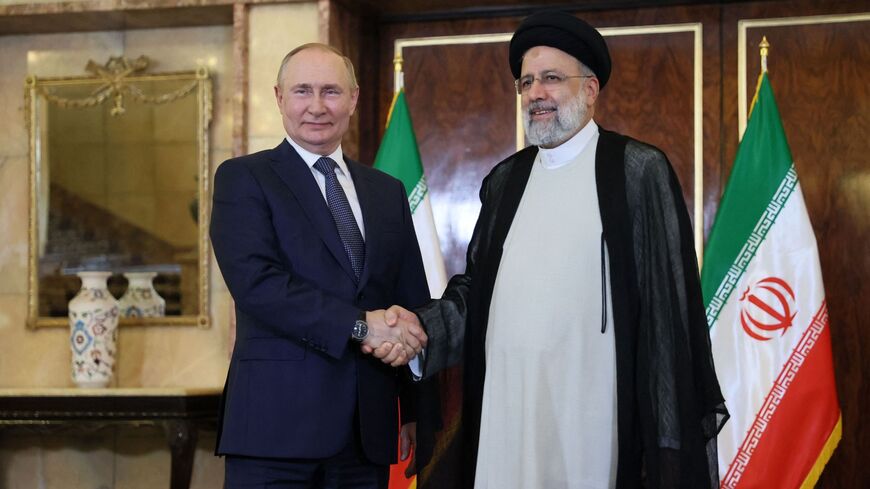 Russian President Vladimir Putin, on his second foreign trip since Russia's invasion of Ukraine, visited Tehran and met with Iranian officials on July 19. Although his trip brought much joy to hardliners in Iran, it seems that Moscow got the best of the visit.

The Russian president was warmly received during his short stay in Tehran, at a time when many capitals in the world are unwilling to roll out the red carpet because of the Ukraine invasion. Even though there was no special ceremony to welcome his arrival, what the highest-ranking Iranian officials — including President Ebrahim Raisi and Supreme Leader Ali Khamenei — said in the meetings with the Russian president gave him much-needed credibility.

Putin's welcome can be considered a big win for Moscow, particularly since his Tehran visit took place just a few days after Joe Biden's Middle East meetings with Israeli and Arab leaders.

That’s not all. Supreme Leader Ayatollah Ali Khamenei became the first world leader to officially buy Russia's justification for starting the war in Ukraine. He told the Russian leader, "In the case of Ukraine if you had not taken the initiative, the other side would have caused the war with its initiative." Khamenei further labelled NATO as a dangerous entity and added that “if it had not been stopped in Ukraine, it would have started a similar war in Crimea."

As a fact of the matter, the supreme leader repeated earlier remarks by Putin during the 77th anniversary of Victory Day in Moscow on May 9.

An hour later, President Raisi used his meeting with Putin to support Russia’s veto of UN cross-border humanitarian assistance to the residents of northwest Syria, saying "Sending humanitarian aid to Syria to put pressure on the government of that country will not ensure its stability."

At the UN Security Council on July 8, Russia voted against the assistance, hoping to help the Assad government in Damascus to regain control over the rebels' last stronghold.

Apart from the political issues, Putin promised economic cooperation with Iran during the trip, including the signing of a contract worth $40 billion by Gazprom to invest in Iran's oil and gas fields, a promise that seems quite unlikely to be delivered given the financial pressure that Russia faces from tough western sanctions.

Hamidreza Azizi, a fellow at the German Institute for International and Security Affairs in Berlin and an expert on Iran-Russia relations, told Al-Monitor that even aside from the finances, “Iran and Russia are rivals regarding energy. Therefore, it goes far beyond expectations that the Russians will enter into a process that will expand Iran's revenues in the energy field, because this issue will be to their disadvantage.”

Yet decision-makers in Tehran seem to trust their Russian friends. Ali Akbar Velayati, an advisor to Khamenei for international affairs, said in an interview with the supreme leader’s official website on June 22, "Mr Putin's behavior and his beliefs, which represent themselves in his actions, stem from his faith in spirituality. … In many cases, Russia has helped Iran with advanced technologies ... while the Europeans have only been US followers in recent years.”

Velayati’s remarks give a precise image of the strategy the Islamic Republic’s political leaders have adopted. Iran's leaders think it is better to side with Russia under these circumstances, even though this will deprive them of global markets as the sanctions remain.

Russia, they likely feel, will probably make up for it by offering concessions in Syria. In the meeting with Putin, Khamenei for the first time spoke about the need for US forces to withdraw from east of the Euphrates. Putin responded positively to Iran's demand, though in a softer tone a few hours later in his joint press conference with Raisi and Turkish President Recep Tayyip Erdogan. While accusing the United States of destabilizing countries, Putin described the presence of American troops in Syria as "illegitimate" and destabilizing. This could help Iran consolidate its foothold in Syria.

At the same time, Russia was not ready to make such concessions to Iran over the past few years. The changes in global and regional conditions have forced Moscow to yield to Iran in Syria to achieve its bigger goals, such as the deepening of Iran's dependence on Russia.

This matters to Tehran mainly because the Islamic Republic’s authorities in recent months continued to pursue talks to revive the Iran nuclear deal, indicating that they prefer receiving security concessions over economic benefits. For several months, Iran has deprived itself of benefitting economically from the lifting of the sanctions after the revival of the deal, formally known as the Joint Comprehensive Plan of Action, and has linked the nuclear talks to its security matters as well as the IRGC’s interests.

Under such circumstances, it is no surprise that Russian strategists let Iran consolidate its presence in Syria to keep Tehran under their control as their global isolation grows.