The killing of seven Sudanese soldiers and one civilian in Ethiopian territory and an attack in the disputed Al Fashaga also takes place as the third filling of the giant Nile dam nears. 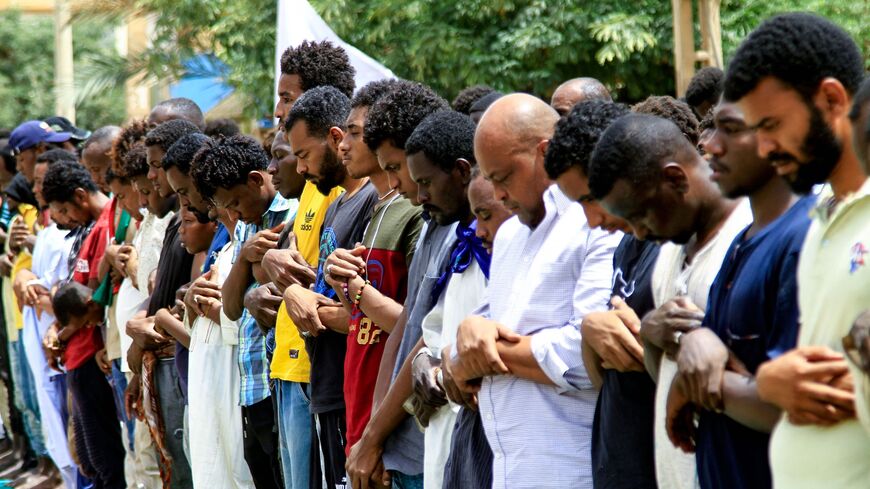 Sudanese demonstrators perform the Friday noon prayers in the southern area of Khartoum on July 1, 2022, a day after a mass demonstration joined by tens of thousands was met with the deadliest violence so far this year. - AFP via Getty Images

The disputed Sudan-Ethiopia border area witnessed a rapid rise in tension in recent days as Khartoum launched a large-scale attack on positions controlled by the Ethiopian Army after accusing it of capturing, executing and publicly displaying the bodies of seven of its soldiers and one civilian in late June — a claim the latter has denied.

The deteriorating situation in the turbulent Al Fashaga region came at a time when the popularity of the generals in Sudan is at a low ebb following last October’s military coup and ahead of a new round of massive protests launched June 30. It also comes shortly before Addis Ababa begins the third filling of the massive Grand Ethiopian Renaissance Dam (GERD) it is finalizing on the Nile, which is one of the main elements of friction between the two countries.

In Sudan, the killings have been unanimously condemned in what some have wanted to see as an unusual show of unity in the country. But several civil society groups have also criticized the generals for taking advantage of a situation they see as partly the result of their mismanagement of their priorities to try to rally the people behind their leadership.

In parallel, Cairo — a close ally of the Sudanese military and aligned with Khartoum on the GERD file — expressed sympathies with Sudan, while the African Union called on the two sides to refrain from military escalation and seek a negotiated way out of their dispute.

“While I do not foresee the Al Fashaga dispute escalating into a full-blown conflict, for now Khartoum may resort to providing support to rebel groups in Ethiopia to weaken Addis Ababa’s position, which would make it more likely to heed Sudan’s demands over the territory,” said Zaynab Mohamed, political analyst at Oxford Economics Africa.

“The dispute should also be viewed in the wider context of regional tensions over the GERD in the Nile Valley region, as the military junta in Khartoum has increasingly aligned itself with Cairo,” Mohamed told Al-Monitor.

Sudan’s Foreign Ministry said in a statement that Ethiopian army troops kidnapped the seven soldiers and the civilian on June 22 inside Sudanese territory and then took them to Ethiopian territory. There, they killed them and mutilated their bodies on public display. The ministry also announced that it would file a complaint against Addis Ababa to the UN Security Council and other regional and international organizations. And it stated that Khartoum would immediately summon its ambassador to Ethiopia for consultations and summon the Ethiopian ambassador to Sudan to condemn the killings. The Sudanese armed forces identified the eight victims.

Responding to the version offered by Khartoum, the Ethiopian government stated that the “incident” did take place inside Ethiopian territory. Yet it said it occurred after Sudanese troops conducted an incursion supported by members of the Tigray People’s Liberation Front (TPLF), and it put the blame for the deaths on skirmishes with an unidentified local militia. Addis Ababa also said the incident was deliberate and intended to undermine relations between the two countries, and called for restraint from Sudan’s government. Ethiopian Prime Minister Abiy Ahmed also issued a conciliatory statement calling for calm.

The TPLF, however, denied allegations made by the Ethiopian government suggesting that its forces had executed or been involved in the killing of the seven Sudanese soldiers and the civilian. In a statement released shortly after these allegations, the group said that members of the Ethiopian security forces have in the past been caught on tape executing civilians repeatedly, although they fell short of blaming them directly for the latest deaths.

“When the Abiy regime finds itself into a tight spot, it makes allegations that are invariably untethered to reality. Having failed at governance, the Abiy regime continues to see Tigray as a punching bag critical in diverting attention away from its embarrassing domestic record and reviving its moribund legitimacy,” the TPLF statement read.

Al Fashaga, the strip of disputed border territory at the heart of the latest escalation, is an important stretch of fertile land coveted by both Sudan and Ethiopia. Tension has remained high in recent years, including occasional spikes in violence, due to the absence of a clearly defined and respected border (a legacy of the colonial era) and a controversial agreement signed under former dictator Omar al-Bashir and rejected since his overthrow in 2019 whereby Khartoum allowed Ethiopian farmers to live and farm this territory and lands belonging to Sudanese farmers with the protection of Ethiopian militias.

The situation in Al Fashaga especially deteriorated at the end of 2020 when Sudan’s army launched an offensive to recover the territory, as Ethiopia found itself engulfed in the civil war in the neighboring region of Tigray, for which Addis Ababa has accused Khartoum of taking advantage of its fragile situation to act unilaterally.

The balance in Al Fashaga has remained particularly fragile ever since, and the area has already witnessed an alarming increase in cross-border incidents since May of this year. This dispute has only further fueled the tension and mistrust that also exists between the two countries over the construction of the GERD and the effects of the war in Tigray.

This time, the attack launched by the Sudanese army came just after its commander-in-chief and leader of the contested Sovereign Council ruling Sudan, the coup general, Abdel Fattah al-Burhan, visited Al Fashaga on June 27. During an inspection of the forces in the area, Burhan assured that the blood of the seven soldiers and the civilian would not be in vain and said the response would be tangible on the ground.

Local media later reported that the Sudanese army retook several settlements and strategic hills in Al Fashaga and captured dozens of Ethiopian troops. “It is worrying and an indicator of how high the tensions remain, how volatile the border area is, but there is reason to think that right now Sudan and Ethiopia don’t really have much to gain from this escalating into a larger-scale conflict,” William Davison, Ethiopia’s senior analyst at Crisis Group, told Al-Monitor.

“On the Ethiopian side, that is because the federal government is more focused on trying to end the fighting with Tigray, and it’s also focused on trying to stabilize Oromia. And on the Sudanese side, the military is challenged, and it seems that while some tensions with Ethiopia to focus attention away from the internal dissent is useful for the regime, they would not want to preoccupy themselves with a full-scale war,” he added.

Following the news of the death of the soldiers and the civilian, the resistance committees of El Gedaref, the region where Al Fashaga is located, organized a protest in front of the office of the Ethiopian consulate and expressed solidarity with junior soldiers and those stationed in the border regions. The coalition of civilian forces that co-ruled Sudan during its fragile democratic transition, the Forces of Freedom and Change, said the killings were a “war crime” and also extended their condolences to the families and the armed forces.

However, the resistance committees used the occasion to reproach the army for being too focused on politics and repressing anti-coup protests instead of directing its attention toward the defense of the country’s borders and the improvement of its own capabilities to face such challenges. They also accused the armed forces of involving young soldiers in the conflict without proper training.

“Three weeks ago, there was a meeting between the Sudanese opposition, the FFC and the military [pushed] by the Saudi and the American envoys. In that meeting, the military wanted a partnership with the FFC, but the FFC turned it down,” Jihad Mashamoun, researcher and analyst on Sudanese affairs, told Al-Monitor.

“Afterward, the FFC said they were going to use the 30th of June processions to change the political landscape. And here the Al Fashaga incident came in a timely manner,” he added. “Burhan and the military, particularly the SAF and generals aligned with the former regime, wanted to use this as a distraction against removing them from power.”