The Ethiopia-Sudan border conflict has hit the headlines once again, with their armed forces renewing bloody clashes at a time when the two countries are going through unprecedented internal turmoil. 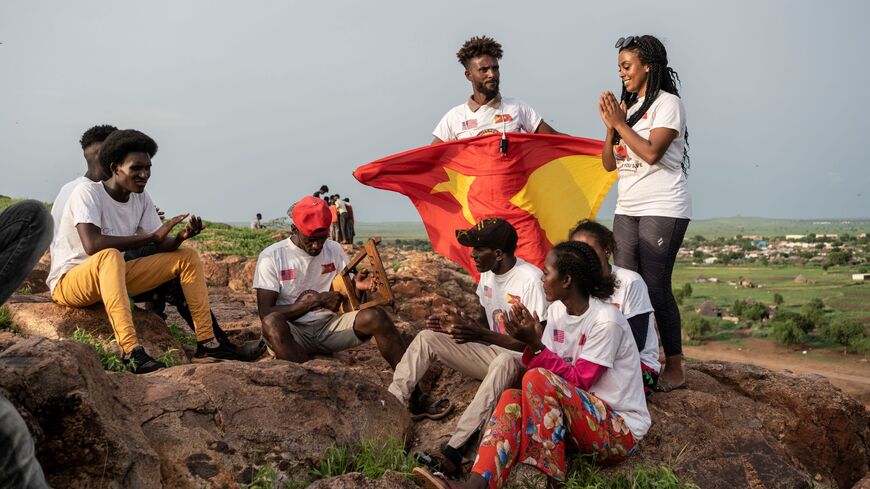 Refugees cluster around a Tigrayan flag in the Sudanese village of Um Rakuba, home to over 20,000 refugees, on Aug. 18, 2021, in Um Rakuba, Sudan. The latest influx of refugees saw more than 50,000 people flee into Sudan in search of safety after military confrontations broke out between Ethiopia and the Tigray People's Liberation Front in late 2020. - Abdulmonam Eassa/Getty Images

Clashes have renewed between the Sudanese and Ethiopian troops in the disputed border area. This latest escalation came at a time when the two countries have been suffering domestic unrest.

In a statement on Nov. 27, the Sudanese army said that elements of the Ethiopian army and its affiliated militias attacked Barakat Noreen town in the al-Fashaqa border area, in a bid to intimidate farmers, destroy the agricultural harvest and infiltrate into the Sudanese territory.

The Sudanese army said that at least six soldiers were killed and more than 30 others were wounded. Yet, the local Sudanese media reported that the clashes killed more than 20 Sudanese soldiers, and that dozens of civilians were killed or wounded.

Burhan inspected the areas where the clashes took place, accompanied by top military and security commanders. The army posted a video showing Burhan doing the V sign in front of his soldiers, and pledging not to give up even one inch of the Sudanese territory.

Ethiopia and Sudan have been locked in a decades-old conflict over the al-Fashqa area, a patch of fertile border land from which Khartoum expelled thousands of Ethiopian farmers in mid-December 2020. Sudan argues that this area is located within its border which was demarcated at the onset of the 20th century. This is, however, rejected by Ethiopia. The move led to clashes between the two countries' forces, claiming dozens of lives on both sides.

According to the army, at least 84 Sudanese soldiers have been killed in the border clashes since November 2020. These figures, however, do not include the recent death toll. Since then, large numbers of Sudanese forces have since been stationed in the area.

The situation in Sudan became more complicated when Burhan dissolved the civilian government and arrested dozens of officials and politicians before reversing the move. Burhan’s coup was met with great international condemnation. Although the military has reinstated the civilian prime minister, it is still unknown if it is ready to give up power. Since then, many democratic forces in Sudan have continued to protest against the military.

Ethiopia's army chief told the US-based Ethiopian Satellite Television that the Ethiopian troops were not involved in the recent clashes with the Sudanese forces. He said there is no reason to attack Sudan, and that his country is not in a position to carry out such attacks because it is fighting the rebels in the north. He hoped that the two countries resolve their problems peacefully through dialogue.

The Ethiopian government spokesman Legesse Tulu blamed the violence on the Tigray People’s Liberation Front (TPLF), according to the Ethiopian Broadcasting Corporation. Tulu claimed that “a large group of insurgents, bandits and terrorists” had crossed into Ethiopia from the Sudanese side of the border and that “the Ethiopian National Defense Force and the local militia destroyed them.”

He also alleged that the TPLF has been training in Sudan with support from foreign backers.

Ethiopia accused Sudan of taking advantage of the fact that Addis Ababa is preoccupied with the Tigray war. Khartoum denies these claims and had announced in late 2020 its full control over its “occupied lands” in al-Fashqa.

In a bid to settle differences, the two countries held talks, most recently in Khartoum in December. Yet, no progress has been achieved. Meanwhile, all international mediation attempts, including by Saudi Arabia, Turkey, Russia and the UAE, failed to de-escalate the situation.

Sudan refused to engage in a new round of talks before any border demarcation, and before Ethiopia recognized that al-Fashqa is a Sudanese land.

Corda Tiziana, a researcher for the Network for the Advancement of Social and Political Studies at the University of Milan, told Al-Monitor that it is convenient for the Sudanese military leadership to take the media spotlight off the weeks-long protests against the October coup.

However, Tiziana said, “It is not strategically sound for Ethiopia to resurrect that border conflict at a time it is bogged down in a militarily demanding civil war.”

The conflict in Ethiopia took a sharp turn nearly a month ago, when the TPLF took the cities of Dessie and Kombolcha in the Amhara region, on a strategic highway leading to Addis Ababa. Out of fear that the rebels would advance toward the capital, the United States, France and Britain urged their citizens to leave Ethiopia, although the government announced that the capital was safe.

The fighting first erupted in the Tigray region in November 2020. Reports indicated that human rights violations continue in the area, with thousands of civilians being killed. According to the United Nations, nearly 5 million people in Tigray depend on relief aid, while 400,000 people suffer from starvation.

Tiziana said, "We should check whether the last week's attack was truly an order coming from Addis." It may have been local militias which acted on their own, she added, and the Ethiopian government's conciliatory reaction to the post-coup arrangement in Sudan suggests that “the federal government has no incentive to further strain relations with Sudan."

The border dispute is fueling tension in other regional dossiers, including the controversial Grand Ethiopian Renaissance Dam (GERD) that Addis Ababa is building on the Blue Nile. Egypt and Sudan fear that the GERD would limit the supply from the Nile River, on which they depend for most of their water needs

Military cooperation between Egypt and Sudan hit unprecedented levels since Omar al-Bashir was overthrown in April 2019, and culminated with the two countries signing military and cooperation agreements to enhance action in training and border security.

"In general, in a zero-sum game, regional powers benefit when a competitor is suffering from internal turmoil. However, in Ethiopia now the situation is so dire that it is not clear how it could bring any more benefit to Egypt," Tiziana said.

The GERD negotiations have stalled because of the conflict in Ethiopia and cannot be reasonably expected to obtain much attention from Addis when the federal government is focused on the Tigray War, Tiziana said.