President of the BRICS International Forum Purnima Anand revealed Egypt's interest in joining the group along with Saudi Arabia and Turkey, and the position is to be discussed at the BRICS summit scheduled for next year in South Africa. 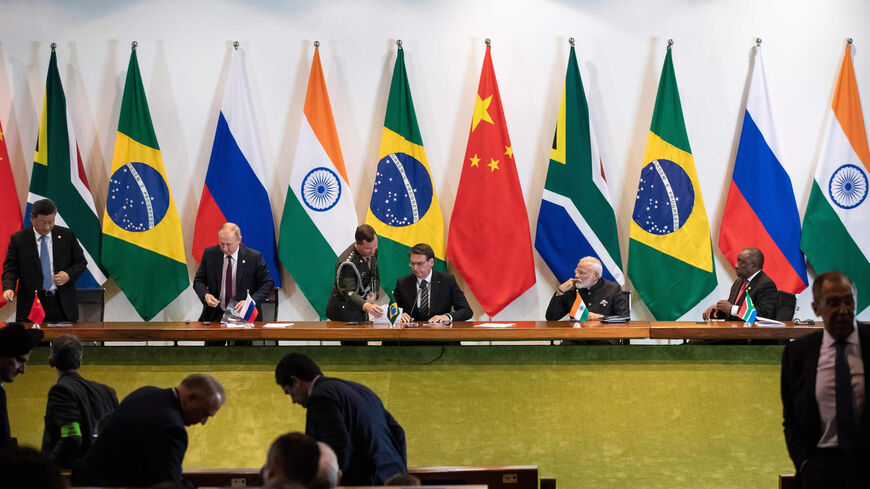 In an interview with the Russian newspaper Izvestia, Anand said, “All these countries [Egypt, Saudi Arabia and Turkey] have shown an interest in joining and are preparing to apply for membership. I think this is a good step, because expansion is always positively perceived; this will clearly increase the influence of BRICS in the world.”

She continued, “During the 14th BRICS leaders’ summit virtually held on June 23-24, China, Russia and India deliberated the three countries’ interest in joining the group.” (There has been no official statement on the outcome of the deliberations.)

The BRICS group was formed by Brazil, Russia, India and China in 2006. South Africa joined it in 2010. According to a July 17 report by Al-Arabiya, it is an independent international organization that works to encourage trade, political and cultural cooperation among member states.

In his speech via video conference, Sisi said, “I would like to express my appreciation for the BRICS group — a forum whose position is growing day by day at the international scene, considering the scope of the economies of its countries that represents more than 20% of the world’s gross domestic product [GDP]. This is in addition to their weight at the international fora, both political and economic, and their prominent role in enhancing cooperation between the southern countries.”

This is the second time Sisi participates in a BRICS summit; he participated in the group’s summit in 2017, also at the invitation of the Chinese president.

Presidential spokesman Bassam Rady said in a June 24 statement, “The BRICS group is one of the most important economic groups in the world … and China’s invitation to President [Sisi] to participate in the high-level dialogue session of this year’s summit is an assertion of Egypt’s position and its leading political, economic and commercial capabilities at the regional level, and this qualifies it to boost its ties with this vital development forum.”

Rakha Hassan, former Foreign Ministry assistant minister and member of the Egyptian Council for Foreign Affairs, told Al-Monitor, “There has been Egyptian interest for years in joining the BRICS group, but the request has been postponed until economic reforms are carried out. These include an increase in the GDP per capita in Egypt.”

In 2017, Egypt aspired to membership in the BRICS group. The State Information Service  said in a report in early September of that year, “Egypt’s accession to the membership of the BRICS group has many opportunities and advantages, especially in the field of development, trade and investment.”

Hassan said, “Talking about increasing the number of BRICS members comes amid very complex international circumstances. Differently put, each party [meaning the major countries] is trying to assemble the largest number of allies, with the BRICS group leaning toward the Russian and Chinese side.”

He added, “Procedures for accession will take some time until further discussions between the concerned countries and the group are held.”

Izvestia said in an extensive July 14 report citing a number of experts, “Saudi Arabia, Egypt and Turkey might be promising candidates to join the BRICS, but the process of their accession will not be quick."

Speaking during the presidency of the 14th BRICS summit July 23, Xi said, “It is important to advance the process of BRICS membership expansion to allow like-minded partners to become part of the BRICS family at an early date. This will inject new vitality into BRICS cooperation and increase the representativeness and influence of BRICS.”

In this regard, Hassan stated, “Despite the BRICS group’s announcement that Egypt is interested in joining the group, there was no official Egyptian reaction in this regard. In any case, the issue will need broad and comprehensive examination on the part of the political leadership in Egypt given the extremely complex international political circumstances.”

He added, “Egypt is currently dealing with all international parties, and it has not joined one alliance against another.”

Ayman Samir, editor-in-chief of the Egyptian newspaper Al-Seyassah, told Al-Monitor, “Egypt’s interest in joining BRICS has been there for a while [meaning since 2017], but the idea of ​​an official decision to join the group may have occurred after the Russian war on Ukraine, as the Egyptian state pursues a balanced policy and stands at the same distance from everyone.”

Samir said, “Cairo’s accession to the BRICS group will benefit it in the medium and long terms as it will create economic cooperation with the major countries in the group, but the idea of ​​​​proposing Egypt’s accession at the present time may be understood by the United States and Western countries as Egypt siding with China and Russia, although the Egyptian foreign policy is mainly based on the principle of balanced international relations.”

Yet Samir stressed, “Egypt’s interest in joining the BRICS group will not subside because it is one of the most important emerging economic groups in the world, given the enormous capabilities its member states have.”

Rashad Abdo, head of the Egyptian Forum for Economic and Strategic Studies, told Al-Monitor over the phone, “The BRICS countries have great economic capabilities, and Egypt’s adhesion to the group offers many economic advantages. Chief among these is the promotion and increase of trade exchange with these countries, which achieves economic returns to Cairo. Also, opening up to joint investments achieves an investment boom in Egypt and creates an opportunity to activate Egyptian exports and obtain products and raw materials at lower prices.

He said, “Egypt must look for its own economic interests in light of the current difficult global conditions.”