India has invited Egypt to be a guest country at the G20 meetings under its 2023 presidency. 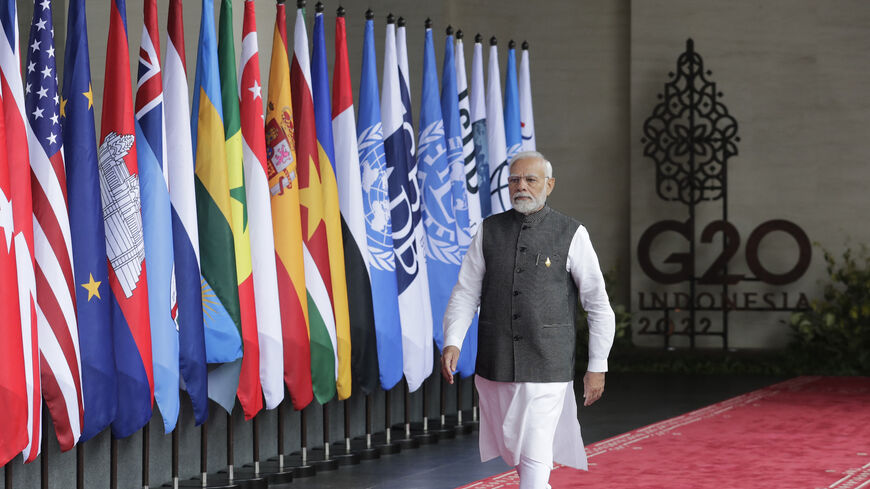 CAIRO — India invited Egypt to participate as a guest country in the G20 meetings during its yearlong presidency of the intergovernmental forum, which starts on Dec. 1.

In a Nov. 24 statement, the Egyptian Ministry of Foreign Affairs spokesman confirmed that Egypt has received India’s invitation to attend the G20 summit, saying the move reflects the historical ties between the two countries’ leaderships, governments and peoples.

The statement quoted the ministry’s spokesperson Ahmed Abu Zeid as saying that the invitation consecrates “Egypt's regional and international status and its influential role in major global economic issues.”

According to Abu Zeid, the ministry officially informed the Indian side that it appointed the assistant minister of foreign affairs for international and regional multilateral economic affairs, Ragy el-Etrebi, as President Abdel Fattah al-Sisi’s personal representative to the summit.

The statement quoted Etrebi as saying, “Egypt is determined to participate actively and efficiently in the various G20 meetings to boost joint international action on the issues on the group’s agenda, in particular issues of priority to Egypt, Africa and developing countries, such as food, energy, climate, development financing and global economic system reforms.”

This is not the first time that Egypt will participate in G20 meetings. It was also a guest country of the forum during China’s presidency in 2016, and again in 2019 during Japan’s presidency.

Ali al-Hanafi, former Egyptian deputy foreign minister for African affairs, told Al-Monitor, “Egypt will greatly benefit from its participation in the G20 meetings during India’s presidency to align its interests with one of the key international organizations that brings together the largest economies in the world.”

According to Foreign Policy's Nov. 25 article on the G20, “The group’s importance is reflected by its economic strength: Its member states account for more than 80% of global GDP, 75% of global trade, and 60% of the world’s population.” It went on, “India is keen to address what it sees as the world’s pressing issues through its leadership, including climate change, food security, health care and technology.”

Hanafi said, “Egypt can leverage its participation in the G20 meetings in India to strengthen its ties with the participating countries and attract more investments. This participation will promote Egypt's presence regionally and internationally as the voice of the African continent at the meetings.”

The Egyptian Foreign Ministry also announced on Nov. 29 that Sisi will be the chief guest at India’s Republic Day on Jan. 26, 2023.

Ayman Samir, editor of el-Seyassah el-Masriyah newspaper, told Al-Monitor, “During the past years, relations between Egypt and India grew in tandem with bilateral economic and military cooperation that underpinned their rapprochement.” He added, “New Delhi's invitation to Cairo to the G20 meetings is tantamount to an invitation to the African continent, not only to Egypt.”

Samir praised the historic relationship between Egypt and India. “The two countries participated in the founding of the Non-Aligned Movement during the era of former Egyptian President Gamal Abdel Nasser and former Prime Minister of India Jawahar Nehru. A strong relationship emerged between the two countries since then across all political, economic, military and cultural fields.”

According to the Egyptian State Information Service, India is Egypt's third largest trading partner, with total bilateral trade exchange amounting to around $6.272 billion in 2021.