Praise for Erdogan's mediation in Ukraine grain deal has its limits

The UN-Turkish mediation with Russia and Ukraine may not give the Turkish president the expected diplomatic boost at home. 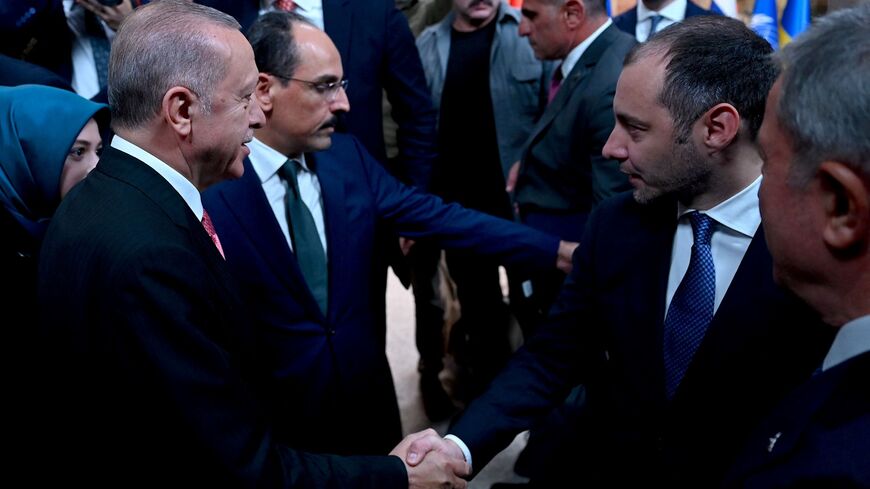 Turkish President Tecep Tayyip Erdogan (L) shakes hands with Minister of Infrastructure of Ukraine Oleksandr Kubrakov during a signature ceremony of an initiative on the safe transportation of grain and foodstuffs from Ukrainian ports, in Istanbul, on July 22, 2022. - OZAN KOSE/AFP via Getty Images

Erdogan’s supporters are casting him as the leader who saved the world from starvation, and he will try and use this to his political advantage at home, where doubts about the competence of his administration are increasing.

His advisors hope this will shore up his weakening domestic support before next year’s presidential elections. Public support for Erdogan has been declining because of Turkey’s economic meltdown mainly due to his unorthodox policies.

Erdogan's kudos from the West for his mediating role, with the UN Secretary general, is the kind of success story he has been angling for in order to improve his international image.

Whether he can build on this deal to overcome his tarnished image in the US and Europe, and lay the groundwork for improved ties with the West, remains an open question.

Michael Crowley of The New York Times reflected the mood in Washington in the headline to his article July 23, “Turkey’s leader remains a headache for Biden despite aiding in Ukraine deal.”

“Taken together, Mr. Erdogan’s actions — and Mr. Biden’s limited ability to restrain them — underscore the Turkish leader’s unique position as a military ally frequently at odds with the agenda of his Western allies,” Crowley wrote.

The strategic losses Turkey incurred due to Erdogan’s headstrong approach include expulsion from the state-of-the art F-35 fighter jet program because of its insistence on buying Russian made S-400 air defense systems. Ankara has been left with no choice but to opt for second best now and try to buy F-16 fighter jets from the US, and is currently engaged in hard lobbying in Washington.

The US Congress, where US-Turkey relations have worsened in recent years, still has to be convinced. It is demanding security guarantees from Turkey regarding Greek airspace and northern Syria before it approves the sale of the F-16s. Erdogan is not in a position to give into such demands.

Erdogan’s preference for hardball diplomacy, which is often conducted through irregular channels, is much more in keeping with his character than the role of benevolent statesman. As a seasoned populist he thrives on megaphone diplomacy believing that this goes down well with nationalist religious quarters whose support he relies on. Those voices have been lauding him, for example, for the negative stance he took on the question of Sweden and Finland’s applications for NATO membership.

“The government proudly calls it new Turkey’s ‘assertive foreign policy’ but in reality, it has proved a loser” Tuygan wrote in his Diplomatic Opinion website. “We Turks need to ask ourselves why we face a broad front against us on almost every issue. … How is it that we have reached a point where even our understandable concerns are met with hostility, at best with indifference?”

Elsewhere, the unlikely combination of the US, Europe, Russia and Iran are unified in their opposition to Erdogan's threatened military operation against the Kurdish People's Protection Units (YPG) in northern Syria.

This leaves Erdogan in a dilemma.

He seems determined to cling to his hardline approach to the US and Europe, but Turkey cannot overcome its current economic crisis without Western support. And if the economic crisis cannot be alleviated, his chances of reelection in 2023 will be endangered.

Thus, Erdogan is working now to improve ties with regional states he previously estranged. He aims to shore up the economy through better ties with the UAE, Saudi Arabia and Israel. He is also exploring means for reestablishing ties with Egypt.

He was at serious loggerheads with all of these countries because of the strong support he gave to the Muslim Brotherhood, especially after the Arab Spring.

Erdogan believed at the time that the protestors on Arab streets — many carrying portraits of him — would elevate him as a leader who would determine the future of the Middle East. But that came to nothing, and in the end he was forced to tone down his virulently anti-Israeli and strong pro-Muslim Brotherhood rhetoric. His need to work with the established regional order trumped his ideological desire to see Islamist parties like his Justice and Development Party (AKP) come to power across the full length of the MENA region.

The UAE, Saudi Arabia and Israel have responded positively to Ankara’s recent outreach. However, they are in the stronger position now because it was Erdogan who was left with little choice but to seek better ties with them.

However, most analysts believe Erdogan will maintain his hard line towards the West because he believes this is what his supporters want.

Meanwhile, more influential Westerners are questioning whether Erdogan's Turkey even belongs in the Western group.

German Foreign Minister Annalena Baerbock found the picture of Erdogan posing with Russian President Vladimir Putin and Iranian President Ebrahim Raisi after their summit in Tehran on July 19 to be “incomprehensible.”

The picture shows the three smiling leaders with arms in the air holding hands in a victory pose. “The fact that the Turkish President is in this photo is a challenge, to put it politely," Baerbock said in an interview with German television.

Mark Wallace and Madeleine Joelson, the leaders of the New York-based Turkish Democracy Project, believe NATO should be ready to suspend Turkey’s membership. “If NATO rules were altered to allow for the temporary suspension of member states until their leaders realigned themselves to the alliance’s values and interests, then Erdogan would understand the prospect of real economic and strategic consequences for his actions,” they wrote in a widely read letter to the Financial Times.

Although the debate is growing among the international community, there is no mechanism to suspend or expel a member state from the alliance and such a prospect remains unlikely even in today’s rapidly changing security environment. Analysts say it is Turkey’s strategic place on the map, rather than shared liberal democratic values, that keeps it anchored in the western alliance. And that importance has increased with Russia’s invasion of Ukraine.

Erdogan, they add, is trying to utilize this to the maximum. The grain export deal may have gained him political points at home and abroad, but it has not yet proved workable, and the signs are not encouraging.

Should it fail, any improvement to Erdogan’s image will turn out to have been a flash in the pan.

To make Turkey a reliable partner for the West again, Erdogan will have to think broadly and consider the future of Turkey, rather than his own political future. Many do not see him as a leader who is capable of doing so.