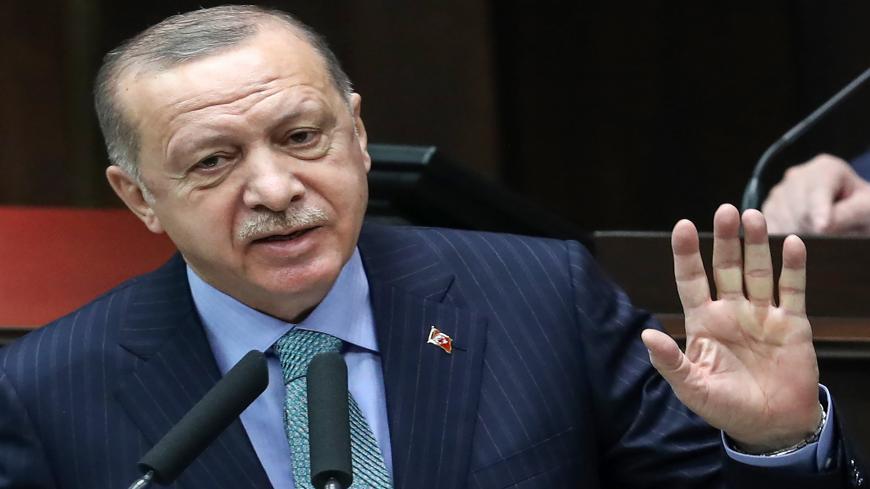 Recep Tayyip Erdogan, Turkish president and leader of the Justice and Development Party (AKP), delivers a speech during a meeting of members of the AKP at the Turkish Grand National Assembly in Ankara, Turkey, Feb. 24, 2021. - Adem Altan/AFP via Getty Images

He is trying to overcome the alienation his abrasive, Islamist-driven and anti-Western approach to international relations has brought.

Erdogan is essentially concerned about his waning domestic support due to the country’s deepening economic crisis, which many blame on his policies.

He is attempting to overturn this situation by employing a more conciliatory tone with Europe, the United States and the Middle East.

Turkey's president hopes to reap the economic benefits that normalized ties with estranged allies and traditional partners would bring, and thus contribute to shoring up his support base.

“We believe there is no problem we can’t solve with any country that respects our national interests,” he told delegates at the convention of his Justice and Development Party (AKP) this week.

“We are determined to turn our region into an island of peace in the coming period by increasing the number of our friends and ending animosities,” he continued.

With presidential elections in 2023 approaching faster then he would like, Erdogan is acutely aware that his political future and the state of the economy are closely intertwined.

According to political analyst Murat Yetkin, the economic situation is forcing him to recalibrate his foreign policy “even if his heart isn’t in doing so.”

Yetkin believes Erdogan’s brand of military-backed diplomacy has shown the world that no game can be set up in the region over Turkey’s head.

“But the cost of the isolation [this resulted in] has been very high,” Yetkin wrote in his popular Yetkin Report blog.

Cozying up to the West is risky business at a time when he can’t afford to lose the backing of ultra-religious quarters and the various Sunni sects that have a vast influence over his grassroots supporters.

Appearing to be making one-sided concessions to the West will also lose him support in these quarters.

Yet it is not clear how he hopes to have normalized ties with the West on an equal footing without making “concessions,” particularly in the fields of democracy and human rights.

With one eye on Brussels and another one on Washington, Erdogan recently unveiled a new “Human Rights Action Plan” that failed to convince anyone given his record in this area.

Recent developments have also shown how far he is prepared to go in this respect.

The stripping of the parliamentary membership of an elected deputy from the pro-Kurdish Peoples' Democracy Party (HDP) — for allegedly supporting terrorism through a tweet he wrote in 2016 — and the move to outlaw the HDP based on shaky accusations about links to terrorism are fresh examples.

In another controversial development, Erdogan used his powers earlier this week to withdraw Turkey from the Istanbul Convention on Preventing and Combating Violence Against Women and Domestic Violence.

He is under fire for overriding parliament and issuing a presidential decree to pull Turkey out of an international commitment that aims to protect women.

These developments — which elicited sharp reprimands from the European Union and the United States — show the extent to which Erdogan will pander to the vehemently anti-Kurdish MHP, and to his fundamentalist support base that views the Istanbul Convention as an attack on Islamic values.

Political analyst Taha Akyol believes Erdogan’s desire to improve ties with the West is a step in the right direction, but he remains skeptical on this score.

“Without a genuine separation of powers and a liberal democracy based on an independent judiciary it will be difficult to be convincing,” Akyol wrote in an article for Karar daily.

It is equally clear, however, that the West does not want to slam the door in Turkey’s face either since doing so would be counterproductive.

Turkey remains a strategically important country that has to be managed carefully, if firmly.

"[We] would like to enter into a constructive dialogue with Turkey. We want to have a positive agenda," German Chancellor Angela Merkel told reporters after a two-day summit of EU leaders in Brussels in October 2020.

High Representative of the EU Josep Borrell, US Secretary of State Antony Blinken and NATO Secretary-General Jens Stoltenberg have also underscored the need to continue working with Turkey on practical matters.

These range from combating terrorism and preventing illegal immigration to providing a venue for Afghan peace talks.

Reducing tensions in the eastern Mediterranean between Turkey and Greece is also a practical consideration for the United States and the EU, which stand closer to Athens than Ankara in this dispute.

The bottom line, however, is that Turkey today is a country that the EU and the United States believe they have to keep on notice over a host of issues.

Erdogan’s Turkey is also seen as a country that is in the Western fold in name only, despite public reassurances from Ankara and Brussels on this score.

Turkey’s efforts to bolster ties with Russia in every field — and its purchase of Russian-made S-400 missile defense systems — remain major obstacles to normalized ties with the United States and NATO.

Meanwhile, the EU sees Turkey as a country with which relations have to be maintained for pragmatic reasons and not because of any shared values.

These are major steps backward for a country whose place, its founding fathers believed, was in the West.

The United States and the EU continue to dangle the threat of sanctions over Turkey — in addition to those already imposed — because of the S-400 issue and Turkish military steps in the eastern Mediterranean.

For Erdogan’s Islamist and nationalist support base, on the other hand, NATO and the EU remain Turkey’s principal enemies, which is an argument that Erdogan has also paid lip service to frequently in the past.

Erdogan’s charm offensive has to overcome these and other such hurdles if Western investors are to be convinced by their governments that Turkey is once again a lucrative haven for investing in.

Nothing represents the collapse of Erdogan’s Islamist foreign policy, however, more than his efforts to mend fences with the Arab world now, and with Egypt in particular.

When he first came to power, Erdogan believed his Islamist credentials, anti-secularism, vitriolic attacks on Israel and close affinity to the Muslim Brotherhood would elevate him to a key leadership role in the Middle East.

When the Brotherhood-linked government of elected Egyptian President Mohammed Morsi was toppled by the military in 2013, he went all out against Abdel Fattah al Sisi, the leader of the coup, sparing him no adjectives in the process.

Sisi has since become president of Egypt and Erdogan has to deal with him now if he is sincere about normalizing ties with Cairo.

Erdogan also alienated the region’s other Arab regimes with his undying support for the Muslim Brotherhood and other Islamic mass movements in the region that they detest and fear.

He also underestimated the continuing influence of Arab nationalism, whose roots go back over a century to when Ottoman rule in the region was ended.

Many Arab analysts are convinced by his frequent historic references that he harbors neo-Ottoman aspirations.

Even his reconversion of Istanbul’s famous Hagia Sophia Museum, the former Greek Orthodox cathedral, into a mosque caused resentment in the Arab world.

Many believe Erdogan’s policies were also instrumental in the formation of the current alliance against Turkey comprising Greece, Egypt, Israel and Cyprus, with backing from the EU and the United States.

He is under domestic fire now for the about-turn he is making with regard to Egypt, and other Arab regimes, which represents the failure of the aggressive regional diplomacy he has been pursuing.

Karar, a leading opposition paper that provides a platform for disheartened former supporters of Erdogan, reflected the sentiment with the banner headline, “Why were eight years wasted?”

The reference was to Ankara’s bellicose policy toward Cairo since 2013 that Erdogan is being forced to change now.

The fact that Cairo is playing hard to get now, in response to Ankara’s friendly overtures, merely compounds the impression of failure for Erdogan.

Meanwhile, a glance at the big picture shows that the success of Erdogan’s current charm offensive is not guaranteed either.