Caught between a rock and a hard place, Erdogan seeks a way out

Ankara has to improve Turkey’s international image with major reforms in order to attract much-needed foreign capital but the jury is out on whether President Erdogan can do it. 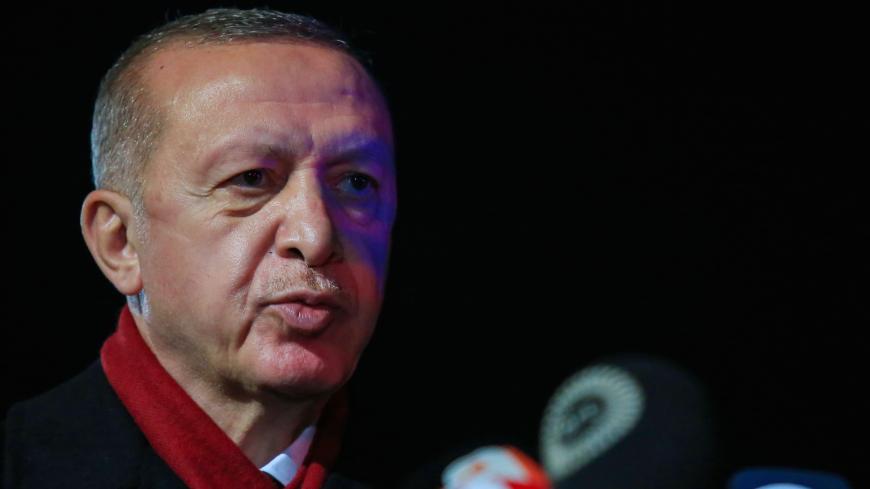 Developments at home and abroad are forcing President Recep Tayyip Erdogan to seek a fresh course aimed at delivering Turkey from its current economic morass and debilitating political isolation in the West.

Having sacrificed his son-in-law Berat Albayrak, the former finance and treasury minister, at the altar of a “new beginning,” Erdogan is casting himself now as an economic and judicial reformist who will overcome Turkey’s woes.

Erdogan has also announced that his administration is working on a new “human rights action plan” in order, as he put it, to be more in step with the changing circumstances of today’s world.

All of this suggests an effort by Ankara at reengaging with the same West that Erdogan and his supporters have been vilifying for years.

With the Turkish lira recouping some serious losses almost immediately after Erdogan accepted the resignation of Albayrak — who was much berated for grossly mismanaging the economy — some believe Turkey is indeed on the cusp of positive change.

Nevertheless, Erdogan faces an uphill battle of his own making. Many believe he will ultimately fail to deliver on his words since this would literally require him to deny all that he has insisted on until now.

Former Prime Minister Ahmet Davutoglu, who was a key member of the ruling Justice and Development Party (AKP) but now heads the opposition Future Party, was cynical in his response to Erdogan’s reform announcement.

During an address to his supporters, Davutoglu said it was as if a new government had come to power and was bemoaning the wreck it had inherited from others after years of mismanagement.

Davutoglu called on Erdogan to “do the opposite of all that he said and did until yesterday” if he wants to initiate a true mobilization for reforms.

Despite the skepticism of Davutoglu and those who think like him, Erdogan has few choices but to try and do something, given Turkey’s deepening economic crisis.

He has to vastly improve Turkey’s severely tarnished international image in order to attract much-needed foreign capital. This will also require an overhaul and transformation in his approach to foreign policy.

Erdogan knows deep down that judicial reform and convincing improvements in Ankara’s appalling human rights record are prerequisites if he wants a new page in Turkey’s relations with the West.

The vital importance of maintaining good ties with the United States and Europe in order to secure Turkey’s long-term interests appears to have also dawned on some of Erdogan’s most devoted acolytes.

A stark example is Cem Kucuk, a columnist for the pro-government Turkiye daily known for his acerbic attacks on Erdogan's domestic and foreign critics.

Arguing that although Turkey is a predominantly Muslim country it has always looked to the West, and emphasizing the folly of relying on Russia, Kucuk put the matter in a nutshell following Erdogan’s reform announcement.

“The money is in the West. There is nothing in the East,” Kucuk wrote.

He added, “Just as we are on the verge of a new period domestically we could also see a new period open up with Europe and America.”

Such hopeful remarks and the support for Erdogan’s reform announcement by the pro-government media suggest a gradual change of mindset in quarters that until recently saw the West as the source of all of Turkey’s troubles.

The results of the US presidential election are also helping concentrate minds in Ankara, given that President-elect Joe Biden has openly declared his intention to place democracy and human rights high on his list of priorities in dealing with Turkey.

Recent developments also show that the United States, France and Germany, with support from other Western countries, have concluded that Turkey is a problem they have to work together to address.

US Secretary of State Mike Pompeo made this abundantly clear in an interview with the French paper Le Figaro after meeting French President Emmanuel Macron on Nov. 16.

“[President] Macron and I agree that Turkey’s recent actions have been very aggressive,” Pompeo said in his interview.

He was referring to Ankara’s military actions in the Nagorno-Karabakh conflict, in Libya and in the eastern Mediterranean.

“Europe and the US must work together to convince Erdogan such actions are not in the interest of his people,” Pompeo added.

Adding to the pressure on Turkey, Pompeo also delivered a major snub to Ankara this week by visiting Istanbul, where he only met with the Greek Orthodox patriarch, and refused to go out of his way to meet any government officials.

France and Germany sent a similarly harsh message to Ankara in October, warning it of dire consequences if it did not stop its provocative actions against EU members.

"It's clear to us that Turkey is permanently carrying out provocative acts which are unacceptable," French Foreign Minister Jean-Yves Le Drian said during a joint press conference in Paris with his German counterpart Heiko Maas.

He was referring to Turkey’s standoff with Greece and Cyprus over energy exploration rights in the eastern Mediterranean, where Ankara has promised military action if it deems its interests are threatened.

Le Drian added threateningly that the EU was ready to change the balance of power if Ankara did not change tack within weeks.

Under normal circumstances, Erdogan would hit back with a bellicosity that goes down well with his anti-Western Islamist and nationalist support base.

The situation is different this time; Turkey has its back to the wall, which leaves little room for Erdogan to act true to character. He appears to be aware that the circle is closing in with dire consequences for Turkey’s already devastated economy, and for his administration.

Erdogan’s reliance on Russia to counterbalance his strained ties with the West is also looking increasingly precarious. Differences between Ankara and Moscow over Syria, Libya and the Caucasus have come home to roost.

The Biden victory in the United States has also dashed any hope that a new page could be opened with Washington, without Turkey having to concede much in return, based on the personal ties Erdogan has established with President Donald Trump.

However, Pompeo’s highly negative approach to Turkey indicates that this may not have been a realistic expectation to start with.

“Although there is talk about warm telephone diplomacy between Trump and Erdogan, this relationship never found its reflection on the field,” said foreign policy and defense analyst Naim Baburoglu in an interview with the Russian Sputnik agency.

Baburoglu said he does not believe Pompeo’s negative stance on Turkey is independent of the Trump administration's position.

“This is nothing but the US administration giving up on Turkey,” he said.

Erdogan now has to deal with Biden, whether he likes it or not, and many in Ankara know that this will not be an easy task unless a fresh approach is initiated.

Erdogan “finally saw that the way to recover the economy was to find a new basis for relations with the US and the EU,” Yetkin wrote in his highly cited blog Yetkin Report.

How far Erdogan’s reform package can go as he tries to appease the West, while retaining his political credibility at home, remains the big unknown for many analysts.

Yetkin is among those who doubt that Erdogan can do much under the current presidential system.

“A strong parliament, an independent judiciary and an independent press are needed. … Erdogan’s reforms are just words hanging in the air, he is not sincere,” Yetkin said.