A Western diplomat says Ankara is unlikely to enact democratic reforms that would ease President Erdogan’s grip on power. 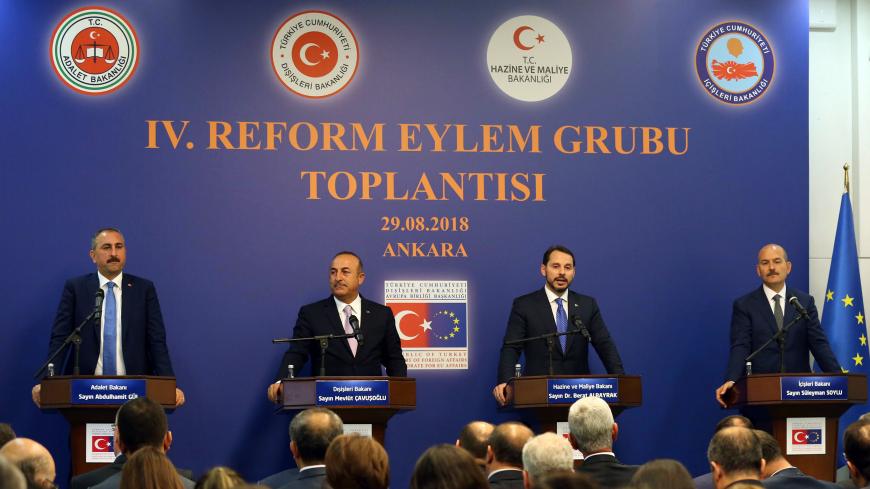 Turkey appears to have rediscovered its European vocation as its ties with the United States go from bad to worse. Ankara is trying to revive its EU membership perspective now, and to this end last week convened its dormant Reform Action Group.

Already overshadowed by multiple issues, relations between Ankara and Washington have deteriorated further over Turkey’s detention of American pastor Andrew Brunson, who is standing trial for terrorism, a charge that Washington says is baseless.

President Donald Trump has turned this into a personal matter, and is demanding that President Recep Tayyip Erdogan intervene and secure Brunson’s immediate and unconditional release.

That has not happened, with the result that the United States has slapped sanctions against Turkey’s justice and interior ministers, and doubled tariffs on Turkish steel and aluminum imports, sending the Turkish lira's value against the dollar into a dramatic nosedive.

Statements of political and economic support for a stable Turkey from highly influential EU leaders, coming at a time when Ankara accuses Washington of declaring economic war on Turkey, have been welcomed warmly by the Turkish government.

There has also been a notable increase in ministerial level contacts between Turkey and Europe, with a heavy concentration on economic ties.

Turkey’s efforts to revive its EU bid also comes at a time when speculation is rife about Turkish attempts to move closer to Russia and China to compensate for deteriorating ties with the West in recent years.

Established in 2014 to expedite Turkey’s EU bid, the Reform Action Group, which is headed jointly by the foreign, justice, interior and finance ministers, had not met since February 2015. In the interim Turkey’s ties with Europe appeared to be heading in the same direction that its ties with the United States are heading today.

A statement by French President Emmanuel Macron last week, which caused a storm in Turkey, also provided an opportunity for Ankara to stress that it would not settle for anything less than full membership.

Addressing a conference of French ambassadors in Paris on Aug. 27, Macron called for a “strategic partnership” with Turkey “instead of granting it EU membership.”

What angered Ankara the most, however, was what he said next.

“Turkish President Recep Tayyip Erdogan has a pan-Islamic project that is contrary to our European values. President Erdogan's Turkey is not President Mustafa Kemal Ataturk’s Turkey anymore,” Macron said. He was referring to the Turkish Republic's secular and pro-Western founder.

Macron also characterized the Turkey of today as being “anti-European.”

Ankara responded by accusing Macron of not understanding Turkey.

“Our country is an inseparable part of Europe from a political, geographic and historic perspective and has always done more than its part for European security,” a Foreign Ministry statement said. “Asserting that our country is ‘anti-European’ certainly does not reflect reality,” it added.

“Turkey has many attributes. It has a Mediterranean and Central Asian perspective, but the fact that it is a European state is indisputable,” Celik said.

Ankara’s renewed tilt toward Europe has been generally welcomed by pro-government analysts. Hurriyet columnist Abdulkadir Selvi, for instance, is one such analyst who is hailing the fact that Turkish-EU ties are out of the freezer.

Even Selvi acknowledges, however, that Turkey has an image problem in Europe that has to be overcome first. “Let’s not kid ourselves. The priority in this process has to be changing Turkey’s image,” Selvi wrote. “Starting the reform process and reviving the relationship with the EU will be useful in this regard,” he added.

Positive signals from Europe do not mean, of course, that Ankara is about to receive a free meal ticket regarding its EU bid. There are major political and legal hurdles that have to be overcome for this bid to move ahead, especially with regard to the state of democracy, human rights and freedom of expression in Turkey.

Independent Turkish analysts do not expect major reforms in Turkey while the government continues with its dragnet against those it accuses of involvement in the abortive attempt to overthrow Erdogan and his government in 2016.

Thousands — including Brunson and a large number of EU citizens of Turkish origin — remain in detention on the basis of evidence that Western diplomats argue would not stand up in any European court.

Meanwhile, Erdogan continues to pander to supporters clamoring for a reinstitution of the death penalty, which would end Turkey’s EU hopes instantly.

The government recently ended emergency rule, introduced after the abortive coup attempt in 2016. Nevertheless, draconian laws remain in place, enabling legal action against anyone deemed by the authorities to be suspect.

Turkey also has strains with many EU member states over their refusal to extradite individuals accused by Ankara of involvement in the plot against Erdogan, granting them asylum instead.

Retired Ambassador Selim Kuneralp, who has spent much of his diplomatic career dealing with EU affairs, is not convinced that the government was sincere in convening the Reform Action Group.

“Why is this group meeting only now, after a gap of three years? It was clear all along what Turkey had to do during this period. All one has to do is read the commission’s reports,” Kuneralp told Al-Monitor.

He was referring to the EU Commission’s annual report on the state of the membership negotiations with Turkey. “The question now is whether the necessary reforms will be done or not,” he said, expressing doubt on this score.

Indicating that the advantage of the positive atmosphere captured in Turkish-EU ties during 2004-2005, after Ankara was accepted as a candidate for membership, had been squandered, Kuneralp said the only tangible process in Turkish-EU ties today is that of dissolution.

“It’s difficult to see things improving after this,” he added, also pointing to the rise of the far right across Europe.

“The only thing Europe is offering Turkey now is what Macron said. Namely a strategic partnership, which it is also offering Russia,” Kuneralp said.

Ahmet Sever, who served as personal adviser to President Abdullah Gul (2007-14) and who is a former member of the Reform Action Group, said Ankara is only moving toward Europe because of the state of its ties with Washington.

“As far as I am concerned, this will go nowhere because it lacks the necessary infrastructure. The meeting of the Reform Action Group was only for the sake of show and did not come up with anything concrete,” Sever told Al-Monitor.

“In the past the group, under President Gul’s scrutiny, would intervene immediately to secure concrete results when problems arose. That train, however, has long departed,” Sever said.

Sever said Europe was only supporting Turkey today because it needs Ankara’s cooperation on issues such as illegal immigration. He added that European banks are owed vast amounts of money by Turkish banks and companies, which means that European governments have a stake in keeping Turkey financially stable.

A Western diplomat speaking on condition of anonymity told Al-Monitor that the proof of Turkey’s sincerity would be the enactment of democratic reforms the EU wants to see.

“The dilemma for Erdogan, however, is that if these reforms were to be enacted, they would automatically undermine his grip on power. There is nothing to indicate that he is prepared to allow that,” the diplomat said.

The next meeting of the Reform Action Group is scheduled for Dec. 11. The measure of the group’s sincerity will be in what is achieved to further Turkish-EU ties in the interim.